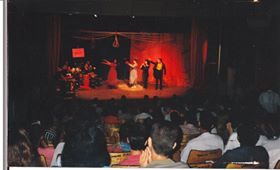 Periodo Especial hails from a collection of short travel pieces I drafted while traveling across Cuba as a writer and theatrical performer.

Sometimes there’s nothing you can do but laugh.

The green room, like the rest of the Cabildo Theater, suffers from deprivation. The embargo has been relentless and now the Soviet Union is gone. Fidel calls it a special period, the Periodo Especial and assures his people that they will survive. Water stains tattoo the ceiling where a single bulb glows in the brown-out of a Cuban night. The women whisper. There is no toilet paper in the bathroom.

We have been traveling since yesterday morning when we left Miami for Havana. Now, in Santiago de Cuba, the ancient city at the other end of the island, it is midnight. Our musicians don’t have the drums or amplifiers we asked for, the technical director for the theater is not present, and our hosts are both drunk.

Eduardo Uribazo, the artistic director of the Cabildo, is a frail, handsome man of sixty-five years with narrow Spanish features and thin hair slicked straight back. He is flanked by a hawk of a man with a bushy crew cut. The hawkish man sits erect in a straight-backed chair, hands on skinny thighs, a cigar burning between his fingers. He has not been introduced.

“Bienvenidos al Santiago de Cuba,” Uribazo begins. I catch fragments, a word in the phrasing, Teatro Cabildo, the festival, and our “espiritu, valor, y corazon…” something, something “…contra el bloqueo.” I translate Uribazo’s flowery language to mean our courage to defy the bloqueo, or blockade, the word the Cubans use to refer to the embargo placed around Cuba by Eisenhower so many, many years before.

“Gracias,” I reply. Of all the cast, I am the only one willing to try speaking Spanish. Fifteen minutes after she landed in Havana, Sonia, our Nuyorican conguera, decided that we were an embarrassment to her Latinisma. She has distanced herself from the entourage, sitting on the floor in the corner, arms folded across her sweat-stained blouse. All this, despite the fact that we are traveling with Shishir, a dark East Indian from Madagascar, Paige, a svelte but distinctly Chinese-American actress, and Gus, our African-American director. The Cubans have welcomed us all equally with open arms, but Sonia refuses to participate, leaving me in this embarrassing position.

“Pero, es necesario a preparer,” I continue. “Uh, we would like to know¼a dondé estan¼the drums. Para tocar la musica.” I drop the bumbling lingo and mime the playing of congas. “You said they would be here.”

“Fuck you Sonia,” I mutter in an aside.

“What do you want from me, hijo,” she hisses. “They talk so fucking fast, I don’t understand any better than you do.”

My friends, my colleagues, my wife the playwright, thirteen actors and musicians, all cross-eyed with fatigue, turn to our Cuban hosts.

The Hawk leans over and speaks rapidly to Uribazo. Sonia is right. Nobody speaks Spanish as hard and fast as the Cubans.

Uribazo nods curtly. He refuses to look at his compatriot.

Uribazo smiles at me and closes his eyes. “Yes, yes, yes,” he says and turns to the Hawk.

I catch something about a music school. “Una escuela de musica,” I mimic. “A donde es…” Is that where the instruments will come from? I wonder why the equipment we requested so far in advance is not already at the theater. My collar is soaked with sweat.

An actor sneezes, startling us all.

A second weary trouper laughs at the absurdity. The company needs to meet with the theater’s tech director. We need to rig the drops, set up the instruments, rehearse specials, do a sound check and run-through before show time, less than twenty-four hours away.

The Hawk pokes Uribazo and fires off another burst. It sounds as if he is asking and answering his own questions.

Uribazo glares at the Hawk, spits back a reply and turns to include us all. He smiles warmly but adrenaline spritzes into my bloodstream.

A ripple passes around the circle of tired performers. Confusion, aggravation, despair register one, two, three across tired faces. They are sweating like pigs in the low-ceilinged room.

“Here it comes,” says the actress to my right.

My wife looks down at the back of her hands and places them in her lap. She says nothing.

“Tiene usted una precisa?” Uribazo motions vaguely with his hand, a listless, resigned gesture. His eyes go back in his head for a moment and I realize how drunk he is.

“Una precisa?” I look to Sonia.

She shrugs. I can see that she doesn’t know the word.

“Una historia corta, una synopsis dramatica,” the Hawk explains. It is the first time he has spoken. His voice sounds like gravel. “Una chica.”

“A short one,” Sonia explains. “Like a script or something.” Maybe she’s coming around.

“Ahhhh,” I utter aloud. Of course. Now I understand. Uribazo has been unable to persuade his colleague that we are not the enemy. Who is to say that we are not propagandists, sent here by our state department to demoralize the Cuban people?

I imagine these two men, arguing, trying to settle the matter before we arrive. Hopefully, Uribazo has defended our right to let the work speak for itself. The Hawk has kept his guard up. Now he is scrutinizing our appearance and behavior for any signs of counterrevolutionary intent.

“Of course,” I say. “Es posible. Una historia dramatica. No problema.” I turn to the Hawk. “I hope you understand,” I say. “No one sent us.” I give up the lingual butchery. “Our government is useless in situations like this. We came here of our own free will. We admire and respect your revolution and look forward to sharing our work with you.”

“And the instruments?” I ask. “Our rehearsal schedule?”

“Quién sabe,” says the Hawk. He stands. The ash falls from the end of his cigar. It does not disintegrate on impact but lies on the frayed carpet, a tiny, gray barrel of integrity.

I nod and we all rise, stepping out into the narrow street. Night walkers pass us like ghosts in the gentle darkness. We have come all this way with the best of intentions, thirteen performers, costumes, instruments, makeup, and a stage set stuffed into two trunks and a duffel bag. Now we float unannounced through the eerie, unlit streets of Santiago de Cuba. Sonia walks behind, separate, proud. Sometimes there’s nothing you can do but laugh.