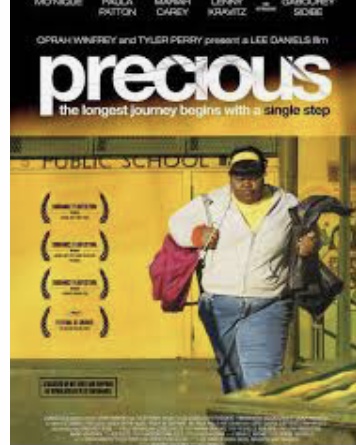 In 2010 the Oscar for Best Picture went to The Hurt Locker,  but in my book the award should have gone to one I was glad to watch a second time –  the nominated film Precious.   The film,  based on the young adult novel Push,  starred the amazing Gabourey Sidibe as Precious the abused and obese Harlem teenager.   The talented comedian Mo’Nique deservedly won as Best Supporting Actress for her role as the abusive mother,  and Lee Daniels directed and co-produced the film with Oprah Winfrey.

But in the late 1990s,  years before the film adaptation was made,  the African American poet and writer Sapphire,  who had been a remedial reading teacher- turned novelist when her book Push was published,  came to speak to the students at Jane Addams,  the south Bronx high school where I was then librarian.   Push had been widely translated,  and Sapphire had just returned from a European book tour and told us about a moving experience she had.

In Stockholm the author had been invited to an English-language dramatized reading of her book.   When she arrived at the theatre expecting to see a Black actress in the role of Precious,  she was surprised to see a slim,  petite,  blue-eyed blonde take the stage.  The young woman went on to give a heart-wrenching performance.

After the reading Sapphire congratulated the actress and asked how she was able to so convincingly portray a poor,  horribly abused African American teenager living half a world away.

”Because you see,”  the young Swedish actress told Sapphire,  “her life story is very much like my own.”

Sapphire,  the author of Push,  speaks to our students.

As Time Goes By
by Jeff Gerken
Just Getting Started
by Penny Righthand
Couldn’t Chose One, Also!
by Joe Worth
“Round up the usual suspects.”
by Lou Moffett
BAH!
by Dave Ventre