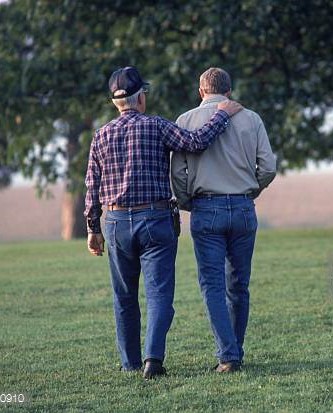 It was a brisk morning as I tagged along with him on our way down the hill towards the barn. There was still a light amount of morning dew glistening in the sun like little stars on the green pasture. I could see where the cattle had walked from their tracks left in the dew and now as they saw us coming they began to bellow since they knew it was feeding time. But this morning there were some other voices as well. It was springtime and there were newborn calves calling out to their mothers that were never more than a few steps away. This time of year was a special time of year and these times were special. Everything seemed brand new including the crisp morning air and with each breath I could see my voice as I would say good morning to the newborn calves and their proud mothers. As the newborn calves try to make their trembling legs hold them upright and try to suckle up to mom for a little breakfast they also looked so new and fresh. Their pretty little white faces and their beautiful shinny red coats and rubbery little hoofs make them look like they should be sitting on a knickknack shelve for all to enjoy. “Dad, quick, look at that one” I said as I grabbed dad’s arm and pointed to a frisky calf running at top speed across the pasture and kicking his heels high into the air only to stop and look around as if to say, “Did all of you see that?” Dad grinned as he unlatched the gate and said, “Yep. He’s feeling pretty good. Cute little rascal isn’t he?” 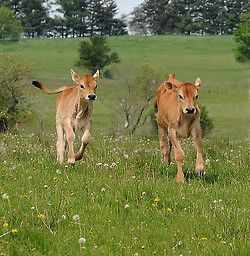 Dad was very proud of the fact that our cattle were so healthy and happy. He worked hard to make sure they were as happy as any other living thing on our ranch and this morning was no different from any other for him. It was time to check on the momma cows and make sure all the newborn spring calves were doing well.

“Dad, look at the pussy willows. Their blooming.” Next to the fence was a cluster of pussy willow and their limbs were all full with fluffy buds. But as I turned around I was surprised to see dad wasn’t walking to the barn but instead to the clump of pussy willows. “What are you doing dad?” He stood looking over the bush for a moment or two and then he asked, “Have you got your pocketknife with you?” Puzzled and knowing to never ask why, I automatically began fumbling in my pockets for my trusty knife. “Uh, gee, I guess I left it in my room dad.” Then he pulled out his knife and opened it up to a stiff, sharp, shinny blade. “Climb over that fence and I’ll hand you my knife and cut me off a piece of that branch,” as he pointed to a specific spot on a limb. Puzzled I climbed over the squeaky old barb wire fence and then took his knife. “This branch?” “Nope, the one above it. There…, that one.” He said. Being careful not to cut myself with the sharp knife since my fingers were cold I pulled down the branch and began cutting away until I had the branch cut off exactly where dad wanted it. “That a boy. Now hand me that branch and come on back over here.” As I climbed back over the fence dad began whittling the branches off until he had a piece about four inches long. “You see, the trick is to get a piece without any limbs or buds. This looks perfect.” Still not understanding what he was doing I just watched. 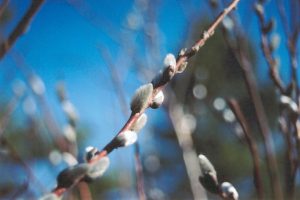 “When I was your age my dad showed me how to make these but you can only make them this time of the year because that is when the sap runs and makes the bark soft enough to work.” “What are you making dad?” “Just watch and find out”, he said as he kept making some precise cuts with angles. As I watched with curiosity he finally began carefully tapping on the bark with the handle of his knife. I saw him glance a peek out of the corner of his eyes to see if I was paying attention and then he glanced at the cattle that were by now waiting at the barn door. They too were wondering why this random expedition to the side of the pasture was taking so long as they continued to bellow as if to say, “Hey, we have babies to feed. We don’t have all day.” But for now they would have to wait. This was my time and even though I still didn’t have a clue as to what dad was making I was really enjoying the moment of just doing something with him.

“There, that should do it” he said as he stabbed his pocketknife into the top of the fence. Then I watched as he carefully began twisting and turning the green bark against the white wood under it until all of a sudden the bark separated from it. “Yep, now we’re getting somewhere” he said as he slid the unbroken cover of bark off the shaft of wood. “OK now, I’ll just make a few simple cuts here on the wood… Like this… and then here… That should do it,” he said as he raised it up and looked to make sure the angles where shaped to his liking. Then he slid the piece of bark back over the manicured piece of wood. Then dad folded his pocket knife and put it back in his pocket and handed me the green piece of wood. “Well, don’t just stand there. Try it out,” he said. “Try what? What the heck is it?” “It’s a whistle. Give it a try.” “A whistle?” You know how to make a whistle from a tree limb?” “Not just any tree limb. It has to be from a pussy willow limb and it has to be during this time of year. It only works when the sap runs in the springtime. That’s what makes the bark pliable enough so you can get it off without breaking it. Go ahead, try it.” Dad watched as I put it between my lips and blew it and I will never forget what a surprise it was to hear that shrill high pitch. I was amazed and as I looked at my new prize I just couldn’t believe that he knew all these years how to make such a special toy. As I stood there admiring my new whistle and trying it out dad went on to the barn and I couldn’t help but wonder, “What else does he know?” 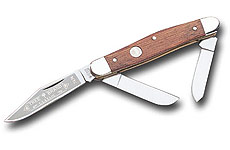 Many times since I have made those same whistles and each time I do I feel as if dad is standing right next to me keeping a watchful eye on me just like that same springtime morning. And every time I hear a whistle I know he is near but the springtime is even more enjoyable since it is my chance to spend time with dad again. While I was on safari in Africa, I carried that same pocket knife to give me the feeling that dad was with me on my journey. 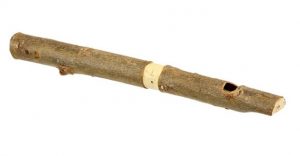 2 Responses to Pussy willow on Two-Mile