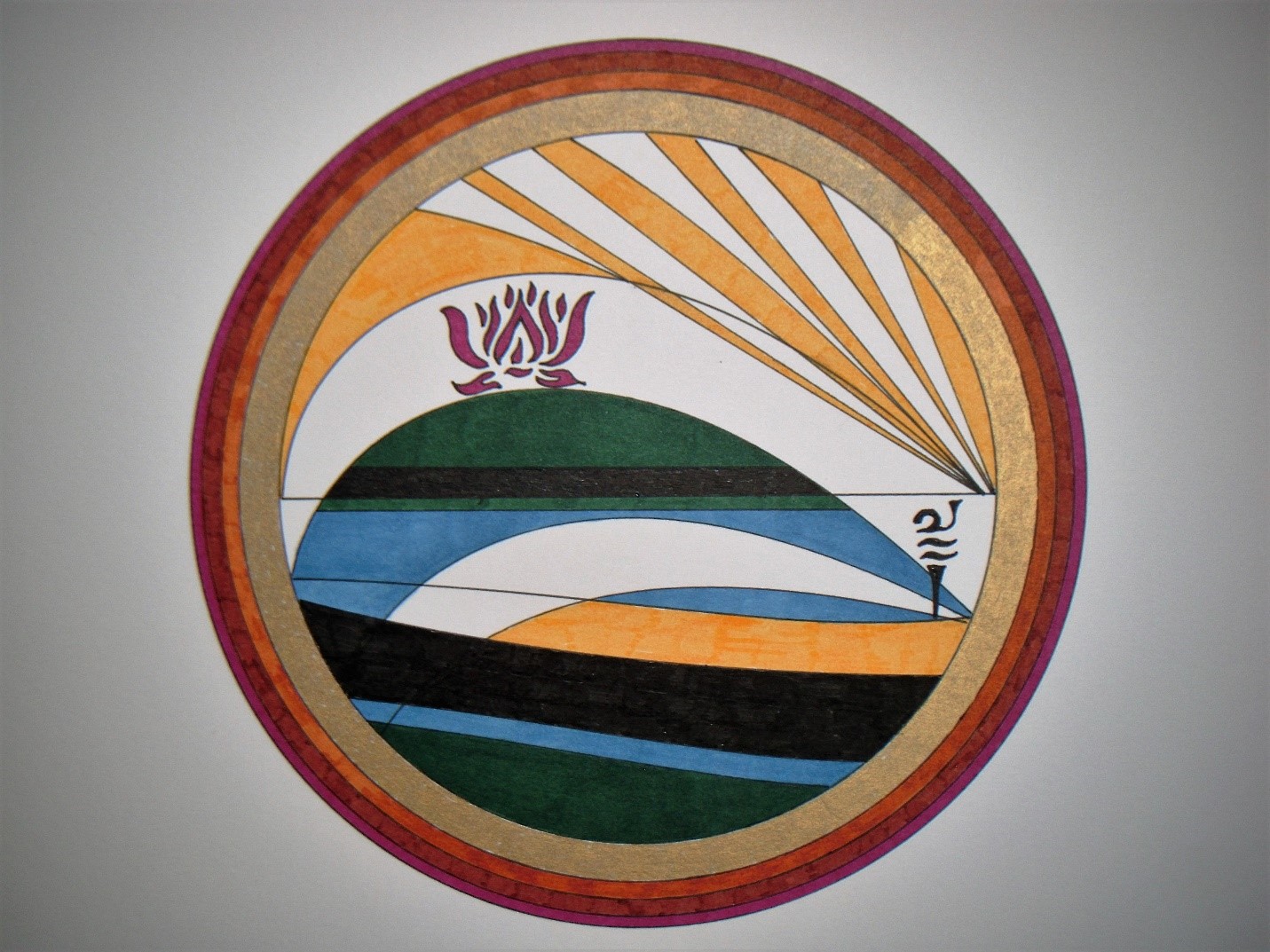 Faith.  Do I have any?  I’m not a believer in an afterlife. I don’t believe in answered prayers.  I don’t believe that there is a higher power looking out for my safety and general well-being.  I wasn’t born for a reason or as part of a plan.

I tried for maybe sixty percent of my 70 years to be Christian and then gave up.  I slipped into Buddhism.  For me it is not a religion.  It is a way of thinking that is peaceful.  There are four truths that make perfect sense and an eight-fold path to follow.  I’m nowhere near the end of that path.  I don’t expect to be.  But I am content being on it.

My Christian path was through three protestant denominations:  church youth groups, college requirements, adult leadership positions, and then nothing.  I still know the words and melodies to a few hundred hymns.  I know the words to creeds, psalms, prayers, and confessions.  I’ve read the entire Bible and some of the possible parts that were rejected when the collection of writings that make up the Bible was assembled.  And I have read church history.

My Christian path was bumpy, but enough of it was good that I stayed on it. There were experiences, friends, lessons in morals and values. And beauty.   I always had questions, doubts, and rejections along the way. And in the end, no belief.

Grandma and the Baptist Church:  From age three to eleven, I went to church with Grandma. In Sunday School, I learned Bible stories. In eleven o’clock service I heard old standard hymns and fire and punishment sermons preached by men with no seminary training who got themselves worked up into rants.  They might start with calm explanations of God’s love, but they ended with shouts, slamming a Bible against their hands and sweating through their shirts after they removed their jackets.  During Sunday dinners, around 1:00 pm, my grandmother praised the inspiration of the preacher’s performance.  “He was feeling the spirit today!”  But I remember remarks such as “I was sure his pants were just going to fall off when he was dancing and stomping around up there.”  No talk of faith except the assurance that God was good and watched out for his people.  That didn’t seem true to me, but I knew not to say that out loud.

Becoming Presbyterian:  By age 12, I was living with my mother and going to church with my friends.  I was happy at the Presbyterian Church.  The church was beautiful:  mountain stone, dark wooden pews, lanterns, and sconces.  An organ in the choir loft, different music, quiet sermons and prayers.  An active youth group with weekly Sunday suppers, with retreats, camps, and theological discussions.  We talked about beliefs, responsibilities, love, kindness.  But, back then, Presbyterians were serious about predestination.  I didn’t like that idea.  Why were all the summer people in our tourist town rich, and we year-round people were not?  Was that the plan?  I said to one of my friends walking home from cheerleading practice one day. “Do you ever feel like an ant in an ant farm?  We are controlled.”  She got very angry and stomped off.

College at a Presbyterian school:  Late 60s.  We were required to take four religion courses.  My first professor seemed bored by the whole thing.  He gave us reading assignments, and we talked about them, but if we were not up to discussing them with any depth or insight, he would talk for awhile and dismiss us early.  At the beginning of the semester, he gave us a single-spaced page summary of the Old Testament.  I memorized it.  When he handed out the exam, it said summarize the summary.  I wrote it out, and he recorded my A.  My second semester professor made assignments in our Gospel Parallels book and insisted that everything was true.  Third semester was about the early church, including geography. The professor believed that the earth was 6000 years old.  The fourth semester was devoted to reading the works of significant church leaders.  I had to confess that I did not finish reading The Confessions of St. Augustine.  I do remember that Augustine was a bishop, and he wrote Confessions in Aleppo. Now Aleppo is destroyed.

We were required to go to chapel four days a week and expected to go to church on Sunday. First Presbyterian was not far away, but we had transportation.  We called it the Vatican, because the church was a huge structure.  The minister was like a very theatrical television preacher with an oily delivery.  One Sunday, I had, what I now know was an anxiety attack, during the sermon.  I slipped out of the sanctuary and then stomped across the school’s nine-hole golf course and back to the dorm.  I switched to Second Presbyterian.

First Marriage, no church:   My first husband did not go to church, and I was fine with that.  Then he met people from the Sunshine Farm, a community of, what should I call them, New Age Christians.  They sang songs they wrote, sometimes accompanied by guitar.  They swayed with their arms in air when they sang, and they spoke in tongues.  They believed that women should be subservient to their husbands.  The members had jobs and built separate homes.  Their leader did not work outside the farm.  I went with my husband a few times, but my resistance grew. One night I reached my limit. I stomped outside and would have gone home, but he had the key to the car.  He came outside to convince me to go back in, but I told him that if he said “Praise the Lord” one more time, I would start screaming.  There were many reasons why the marriage ended, but his religious obsession was a big one.

Graduate School and the Episcopal Church.  Growing up I often went to an Episcopal church with two of my friends.  I loved going there.  Beautiful American Gothic building, prayer books, kneelers, incense, stages of the cross, and short informative inspiring sermons or homilies.  I loved the Rector’s wife.  She and a member of the church provided a space and activities for us town kids every Saturday night for my four years of high school.  We grew up in the Parish Hall.  She was the most “good Christian” person I have ever known.

After my divorce my therapist asked me what I had done or wanted to do before I was married.  One of the things I said was “I wanted to go to an Episcopal church.”  He said, “What’s stopping you?”  So, when I started classes at my grad school located in one of the most beautiful towns in the US, I went to one of the oldest Episcopal churches in the country.  I loved it.  Usually I went to Evensong.  It didn’t matter that I was still an unbeliever.  No one there ever asked me if I were.  I went to confirmation classes and became an Episcopalian.

Married again.  This time to an Episcopalian:  I sang in the choir, I listened to excellent, thoughtful sermons.  I loved the beauty of the building.  I was very involved in the church to the point that I was asked to serve on the Vestry.  The first year I was in charge of social activities.  I loved planning the parties, the dinners, and the pageants. The second year I was asked to be the stewardship chairman.  That was painful.  Convincing people to give or give more was hard.  My third and last year, I was asked to be the Senior Warden.  That was harder.  Church business, church politics, encouraging the Rector, and dealing with concerns and complaints wore me out.  I stopped going to church after the new Warden took over.  Prayers didn’t help me.

New church in a new state.  My husband found a church with an excellent choir.  I lasted a few years, but the new building was half blond wood and half glass.   It reminded me of a restaurant near the town we moved from.  Some of the sermons were interesting, but the ones by the assistants and some deacons made me cringe.  I did not get involved with any of the activities.  I stopped going.

I read more church history and explanations. The Christian church was and often still is cruel, controlling, and cold. It left behind the teachings of a poor itinerant man, and become a grand business even after a reformation. Thomas Jefferson was Deist. I tried that.  I could make up my own religion.  That didn’t last. I read Christopher Hitchens and similar writers.  I know I am an atheist.  My husband accepts that, but it isn’t something I talk about with more than a few friends.

Buddhism and my breakdown:  I started reading Buddhist writings.  I tried meditation, and I started making Buddhist art.  Then I lost it.  I mentally fell apart.  Too many responsibilities, too many classes to teach, both English and art, a kind loving child with learning difficulties who was struggling to finish high school, and a demented mother.  Prayer didn’t help any of that.  When I left the hospital, the psychiatrist there sent me to an excellent therapist whose therapy is based in his Buddhism.  He gave me the Tao Ti Ching.  I knew that I was where I should be. I’m still there.  One wall of the Tibetian store in the closest city has a wall full of books and CD’s that I can buy when I need something more to read and to play when I meditate.  I make my Buddhist art as meditation and sell it in a shop downtown.

So, no, I don’t have any faith, but I do have peace, and what comes after this life is not frightening. 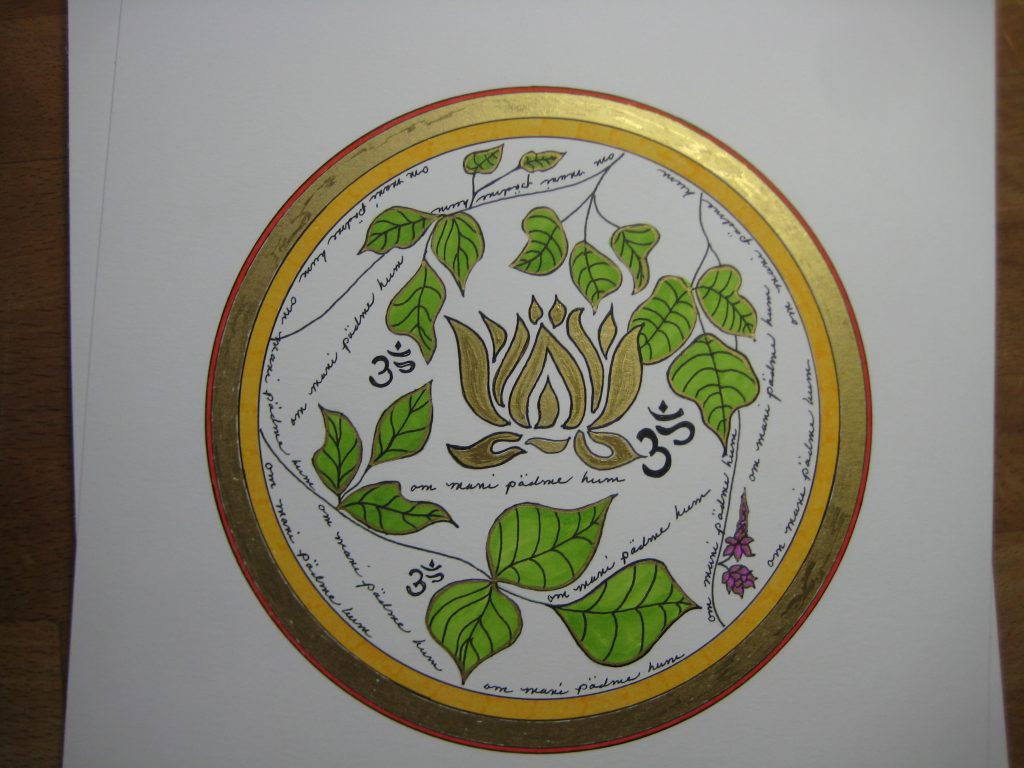 3 Responses to Searching on two paths