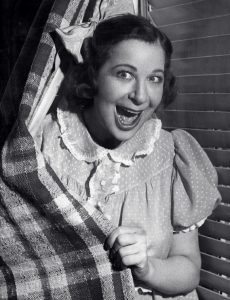 I don’t remember being jealous, but  I went  into  “mooching mode” by  watching other peoples’ televisions.

The first time I watched television was in  1948 when very few people I knew owned a set.  My Uncle Jack and Aunt Jennie invited, what I think, was every small child in the Bronx to watch the “Ringling Brothers, Barnum and Bailey” circus.  Even to a small girl of 5, the television looked miniscule.  Not only could I barely see the screen, but the black and white picture was blurry and unwatchable.   I had seen  live circus and I knew that this box was scarcely a substitute.  I couldn’t understand what the excitement was all about.

My father, a tax assessor, employed by the city of New York, had fallen behind the economic curve after the war, so in any case,  we could not afford a television . Any extra  entertainment funds were funneled into his hi-fi and record collection. But by 1949  it seemed that  all of my friends and family had televisions, but not us.   When we finally got a set in the mid 1950’s,  I felt like we were the last family in my neighborhood to own one.

I don’t remember being jealous, but  I went  into  “mooching mode” by  watching other peoples’ televisions.  Some of my earliest childhood memories involved these visits to friends’ living rooms.  In the first grade I was invited by a classmate Steven   to watch my favorite  show,  “Howdy Doody”.  I settled in and sat  on the floor (I can never remember ever sitting in a chair when I watched t.v. at someone’s house).   I was  transfixed by the players: Howdy, Mr. Bluster, Princess Summerfallwinterspring, Flub-a-dub  and Clarabell. Television was getting technically better and I was enjoying Howdy, a cute little marionette cowboy with a freckled face.   I suddenly  turned around and I saw that Steven’s little sister had pooped right on the floor.  I had experienced my first ironic moment in life  and I could never watch Howdy Doody anymore without thinking of Steven’s little sister blithely taking a dump right in the living room.

One of the reasons I didn’t really miss  t.v. was because my older  brother  and I were  radio fans.  This brought about a real conflict in my young life and a turning point in my relationship with television. My favorite radio show was a cute little comedy called “Baby Snooks”,  starring  the well known vaudeville comedian, Fanny Brice.  She played a little girl who was always getting into trouble because of misinformation, misunderstandings and general foolishness.  The show was on Tuesdays at 8:00.  Anyone from that era knows that it was  sacred television time, the hour of  the Milton Berle Show.  “Uncle Miltie” as we knew him,  had also been a vaudevillian, and  it has been stated that because of  the success of his t.v. variety show, television sales went through the roof in 1949. He was consequently dubbed, “Mr. Television”. My brother and  I were generously invited by our next door neighbors, the Gordons,  to watch the show. (We  sat on the floor, of course).

I felt very torn between Snooks and Miltie.   Some Tuesdays I would stay at home and laugh along with Snooks, but most Tuesdays the lure of t.v. would be too much for me and  I’d sit closely squeezed next to my brother in  the Gordon’s living room.   1951 was a turning point.  My mother sadly announced that Fanny Brice  had died and there would be no more Baby Snooks.  Radio now receded to the background.  Uncle Miltie and television now had my full attention.

8 Responses to Television Came Late in my Early Life

Winky Dink and Me
by Suzy