To commemorate the 50th anniversary of Women’s Suffrage in the United States, record numbers of women march along 5th Avenue, past a banner that reads ”Women of the World Unite!’, New York, New York, August 26, 1970. (Photo by Fred W. McDarrah/Getty Images)

For me, women’s liberation began abruptly in 1969. I was working with a theater company that deployed guerrilla theater in San Francisco’s parks. We had developed a show about Noah and the apocalypse, a grim but hilarious metaphor spoofing our wartime paranoia.

We had plenty to be paranoid about.The world had burst into flames. The ecstatic apogee of the Chicago protests, the spring rebellions in Paris and Prague had been driven underground. Weatherman destroyed SDS and charged into their days of rage like angry children. Black and Chicano power splintered and turned nationalist. The FBI and local cops killed forty-nine Black Panthers that year, Nixon took the White House, and the war raged on.

“Noah” was a righteous show, or so we thought. We used a Brechtian gizmo called a cranky as the centerpiece of our portable drama. Mounted on a stepladder, the cranky consisted of two spools of butcher paper set in a wooden frame. As an actor cranked the spools, colorful illustrations rolled across the paper, adding impressions to our musical tale of the Biblical patriarch and his rainy fiasco.

My mother attended the show one sunny day. We were performing in Golden Gate Park when two women showed up at our performance and trashed us. “Hey!” they shouted, pointing to the cranky and an incidental cartoon of a naked woman in a shopping cart. “What do you think she is… a piece of meat?!”

The intensity of their protest stopped the show short. Actors and musicians, male and female, froze.

“Pigs!” the women shouted. “What does that image say about women? What does it say about you?”

Dumbfounded, I stared at the cranky image, a white-skinned, big-breasted, blonde stuffed into the shopping cart. Her presence served no purpose, did not support the story, was not mentioned in the script. I experienced a momentary whiteout, a shock of recognition. The two protestors were right! They were right on!

I turned to my mother. Behind her dark, intelligent eyes, she seemed to be re-calibrating her entire life.

That was the beginning. Feminism roared through San Francisco like a tidal wave. Men didn’t know what hit us. Women didn’t fully understand why they were striking out. But they did. They knew something was wrong.

At first, women had no words for their rebellion. Political correctness rose out of discourse, carrying validation, a useful tool to protect newborn notions and infant vocabularies.

For men who dared to reflect, exploring our chauvinism felt like tumbling through surf, salt water in our lungs, sand up our noses, skin scraped raw as we were thrown ashore, then sucked back into the maelstrom.

Back then, men didn’t become feminists; we supported feminists or reacted against them or struggled with both. Feminism set off a battle within ourselves to understand how deeply our dominant roots had crept into our brains, our DNA, into our expressions, assumptions and our now-exposed behavior. 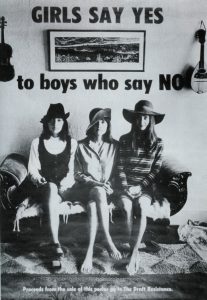 Changes came, slow at first, then accelerating. The formerly radical draft-resistance poster of Joan Baez and her sisters looking cute and saying “Girls say yes to boys who say no” became a symbol of chauvinism on the left. What had been a clever plug for draft resistance flipped into evidence of the depth of sexism.

Women gave no quarter. Why should they? They’d endured a myriad of male-inflicted traumas for millennia. In political meetings, women demanded to be heard. The men, leaders of the revolution, first ignored or ridiculed them.

When you push hard, power pushes back, even from the most unlikely directions. Abbie Hoffman claimed that a women’s place in the revolution is on her back. Fuck you, Abbie.

Dragging at us from behind, the frightened straight world copped a titillating feel for bra burning. The media invented diminishing terms — women were radicals, militants, man-haters, bra-burners, the PC police. They characterized the new rebellion as strident, perverse, wanton, and a threat to society

Women evoked Lysistrata to protest the ages-old Peloponnesian war between men and women.

Feminism became as immediate as Vietnam only closer. Here at home, we had met the enemy, and they were us.

In those first, raw years, if you were savvy enough to listen and tough enough to stay open, you could allow yourself to learn from women sought to discover their power and define their rebellion.

If you went with the flow, lovers might learn that lovemaking was a dance, not a solo routine.

Men who resisted seemed to harden like concrete, male versions of Lot’s wife. “Don’t look back,” we chanted. “Freedom lies ahead.”

Visual attraction posed a dilemma for both sexes. What did a woman’s body represent? What did women’s brave new lives express? Was there intent in appearance? How did men respond? With new notions of gender neutrality or with rape?

Men struggled to dissolve guilt at our transgressions before it became resentment. We succeeded and failed.

Women struggled to understand the depth of their oppression and take personal and political responsibility for their liberation. They succeeded and failed.

The personal had become political.

The political had become personal.

Awareness blossomed. Confused, committed, conflicted and ecstatic, we learned how to march together through the meadows, singing glorious songs of freedom.

Now feminists know more than we did about their place in the world and the obstacles they face. They know how to huddle and strategize. A third wave of feminism has progressed from raising awareness to raising hell.

Nothing can stop them now.

Nothing can stop us now.

I Am Woman, Hear Me Roar
by Suzy