Too Much Wine With Peter, Paul, and Mary by gsbate
5
(9 Stories) 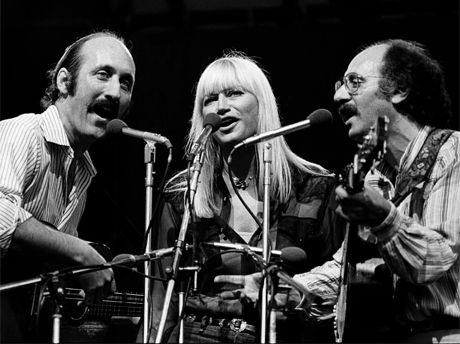 In the summer of 1981, I went to the Merriweather Post Pavilion in Columbia, Maryland to hear Peter, Paul, and Mary. They had broken up in 1970, gotten back together in 1978, and were touring together again the summer of ’81.

In the summer of 1981, I went to the Merriweather Post Pavilion in Columbia, Maryland to hear Peter, Paul, and Mary. They had broken up in 1970, gotten back together in 1978, and were touring together again the summer of ’81.

I went with my friend Diane Dunkley, and four other friends who worked at Colonial Williamsburg. I had just started the MA program in English at William and Mary and was sharing Diane’s apartment until I found my own place to live. We were a mixed group in ages. Diane, the Manager of the Governor’s Palace, John, an actor at CW, and I were early 30s. Irmalee, a guide for school groups was in her 50s, and Doris and Jamie, interns, were early 20s.  Our experiences with PPM were quite different.  But we all loved them.

I bought my first PPM album in high school.  I knew all the words to “500 Miles,” “Lemon Tree,” “If I had a Hammer,” and “Where Have All the Flowers Gone.” My high school friends and I got together to sing folk songs. Diane and I sang them together in the early 70s when we were teachers at a high school in Virginia. Diane played guitar. By then we were singing “Puff the Magic Dragon,” “Blowing in the Wind,” and “Don’t Think Twice, It’s All Right.” I wanted the divorce I was in the middle of getting in 1981, but “Don’t Think Twice” still resonated.

At Merriweather Post, we sat on the grass.  It was a beautiful night for being on a quilt on the ground. Clear sky, stars. But it was hot. Maryland in the summer. Soaked with sweat. Merriweather Post sold wine. I drank some, and a bit more as the night went on.

We all sang along with PPM. Even the interns knew the words. It was an amazing concert. We were listening to PPM. Imagine that. I had loved their music for almost 20 years. Every song they sang, I associated with a time, a place, and special people.

Then I started crying. Sentimental crying. One of the interns put her arm around me and asked what was wrong. “Nothing,” I said, “I’m happy.” Diane assured her that I was just fine. I cried some more as the concert went on.

We all sang PPM songs on the way back to Annandale, VA where we were staying at Diane’s mom’s house.

We were up early the next morning to go downtown D.C. and tour museums. We ate lunch in the cafeteria at the Museum of Art and then went separate ways after agreeing to meet back near the cafeteria at the beautiful waterfall that was behind glass. I stayed in the art museum looking for favorite paintings and bought a print of a little girl with a yellow hat. When I got sleepy, I went back to our meeting place.

I was asleep, stretched out on a bench, when Diane woke me up.  An elderly lady also sitting on the bench pointed to me and said to Diane, “That one is hungover.” That still makes me laugh.

At the end of the movie “Stand by Me” Richard Dreyfuss says, ““I never had any friends later on like the ones I had when I was twelve. Jesus, does anyone?” I’ve had good friends all through my life, but those folk singing friends and lovers of Peter, Paul, and Mary are some of the special ones.

One Response to Too Much Wine With Peter, Paul, and Mary