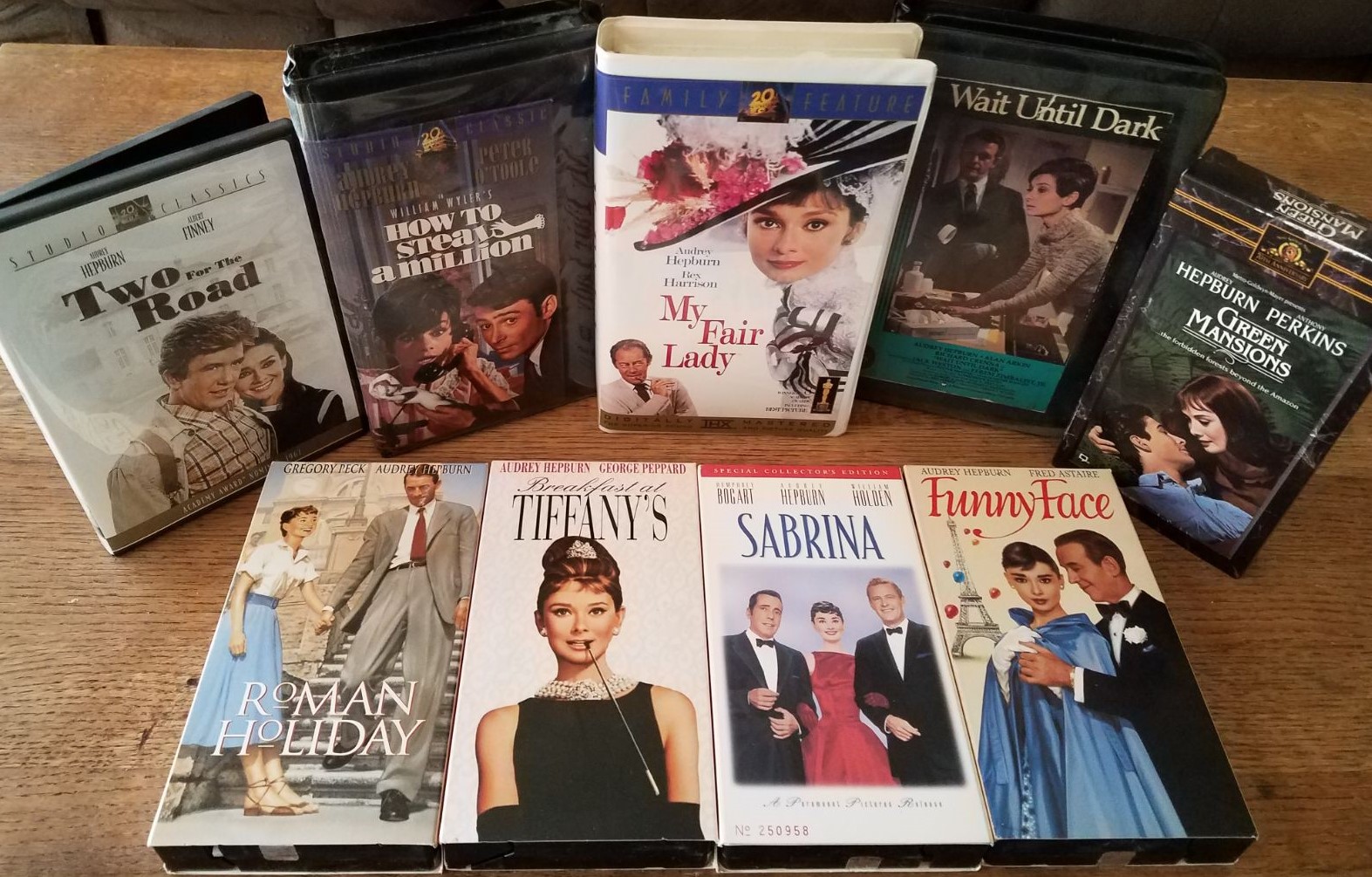 My collection of Audrey Hepburn movies

It strikes me that there are two different categories of rewatchable movies. There are those that you love so much that you will leave your house and go to the theatre to see them whenever they are playing near you. And there are those that you have on videotape (formerly) or DVD (more recently) or just know they are on a streaming platform you subscribe to, and are therefore available to watch on a moment’s notice, in the comfort of your home, when the spirit moves you. The movie theatre category requires a higher level of devotion, but may not even be relevant any more, in this era of streaming everything.

In my story Celluloid Heroes, on the 2018 prompt “Best Picture,” I awarded the title of “Best Picture Ever” to 1943’s Oscar-winner Casablanca, saying this movie has everything — history, politics, a café full of people singing the Marseillaise in defiance of the Nazis (most of whom were played by Jewish refugee actors), and the powerful love story between Rick and Ilsa with the indelible parting line “we’ll always have Paris.” I stand by this judgment, and also deem it the most rewatchable. I would drop everything to go see it, and no matter how many times I see it I never get tired of it.

However, as I also stated in that story, a close second in my heart would be almost any film starring Audrey Hepburn. I have loved Audrey Hepburn for as long as I can remember. It may have started out because she was very thin, dark-haired, and flat-chested like me, at a time when the preferred type (in the movies and in life) was a voluptuous blonde like Marilyn Monroe or Jayne Mansfield. But in addition to her looks, she had a loveliness and charm and dignity, whether she was playing a princess, a nun, a blind woman, or a jungle “bird girl.” She always managed to have at least plausible chemistry with her leading man, even those, like Humphrey Bogart or Fred Astaire, who were thirty years older than she was.

Over the years I collected many of her movies, thinking that I wanted to have them to watch any time I felt like it. (See Featured Image.) Unfortunately most are on videotape, and the only VCR we still have is built into a very small television that is tucked away on a shelf in the bedroom. Little did I imagine how fleeting the videotape era would be!

My all-time favorite rewatchable Hepburn movies, out of the two dozen or so that she made, are Breakfast at Tiffany’s (1961) and Sabrina (1954).

When I first saw Tiffany’s I was ten years old, and I don’t think I understood the plot at all, but I was still charmed by it. The story, by Truman Capote, is pretty sophisticated. Holly Golightly is a glamorous New York socialite (and possibly call girl) who delivers coded messages to a mobster at Sing Sing Prison, and is looking to marry great wealth. Her neighbor Paul is an unpublished writer being kept by an older woman. All of that went over my head. But I loved her elegant outfits, and her cigarette holder, and best of all, the scene where she sits out on her fire escape playing the guitar and singing “Moon River.” That became my favorite song, and has continued to be, to this day. The more times I watched the movie, the more details I got, which made it even better. Since Holly and Paul had gotten a crackerjack ring engraved at Tiffany’s, I tried to get a cigarette lighter engraved there. (They wouldn’t do it.) I have to admit that now, with 21st century sensibilities, it is hard to watch Mickey Rooney (wearing facial prosthetics) playing the part of the Japanese landlord who calls her “Miss Gorightry” and yells at her for losing her key all the time. His character was intended to be funny, but times change and it doesn’t seem funny any more. However, that doesn’t prevent me from loving the movie anyway.

Sabrina came out long before I started watching movies, so I don’t think I ever saw it in a theater. I can’t remember when or where I first saw it. I adored the story of the chauffeur’s daughter who is in love with the boss’s playboy son David (William Holden), goes to Paris and returns grown up and elegant, causing him to notice her for the first time. When it turns out that he is the wrong brother for her for so many reasons, she ends up with older brother LInus (Humphrey Bogart). The scene where she is at the Cordon Bleu cooking school learning how to crack an egg with one hand is a favorite in my family. She gets to sing in this movie also, the French song “La Vie en Rose.” (She has a lovely singing voice, notwithstanding the idiots at Warner Brothers who wouldn’t let her do her own singing in My Fair Lady!) I loved this movie so much, I named my first child Sabrina.

One Hepburn movie that turned out not to be rewatchable for me was Wait Until Dark. I saw it in the theatre in 1968, shortly after it came out. I can still remember screaming at the top of my lungs (along with everyone else in the theatre) at the dramatic and terrifying climax, when one of the bad guys jumps out at poor blind Audrey. When Tower Records/Books/Video was going out of business and selling all their videotapes very cheaply, I bought this one, among others. Years later, I sat down to watch it with my husband and kids. I found that I couldn’t, it was making me much too frightened in anticipation. I was actually shaking. So after about the first forty minutes, I went upstairs and read a book while they watched the rest of it. Maybe someday I’ll try again, but I doubt it.

There are many other movies from the ’30s, ’40s, and ’50s that I could add to my list of rewatchables (Wizard of Oz, Singin’ in the Rain, Some Like It Hot to name a few). However, more recent decades have not produced movies with the same rewatchability. I can think of only two from the last forty years that I have rewatched multiple times and continue to enjoy, and they are both “chick flicks.” 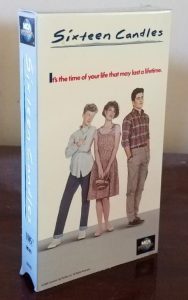 Sixteen Candles (1984). I bought this movie on videotape as a present for my daughter Sabrina on her sixteenth birthday in 2001. I had never seen the movie, but it seemed like an appropriate gift, and we had a Sacramento connection with the star, Molly Ringwald, who as a child used to sing at the Sacramento Jazz Jubilee every year with her father’s jazz band. However, Sabrina had absolutely no interest in watching it, and never even took the plastic off the box. Many years later, my younger daughter Molly discovered it in Sabrina’s room and wanted to watch it, so she unwrapped it and we watched it together. It was delightful, a sweet movie about the trials and tribulations of turning sixteen, dealing with high school, having a crush on a popular boy, and being misunderstood by your family. We have watched it together many times since then, and it is always still enjoyable. As it turns out, just like in Breakfast at Tiffany’s, there is an Asian character who is a slightly offensive caricature, but at least he is played by a real Asian actor, Gedde Watanabe. 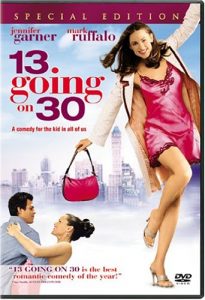 13 Going On 30 (2004). Molly bought this movie on DVD, probably with one of the gift cards she got for her bat mitzvah. Since it’s about a girl who is thirteen years old at the beginning of the movie, it was the perfect time for her to see it. We watched it together, and we both loved it. When the geeky, unpopular main character wishes at her birthday party that she were “thirty, flirty, and thriving,” she wakes up the next morning and finds her wish has come true. However, it turns out that, while she is a successful magazine editor, she doesn’t like the person she apparently became in the intervening seventeen years, so she needs to figure out what is wrong with her life, and how to fix it. Of course it ends happily.

Now that there are so many new movies available to stream, I am less inclined to rewatch movies I have already seen. I feel as if it is more important to see the current films being produced, even though they generally do not rise to the level of the classics of yesteryear.