I voted in my first presidential election in 1980. I was still in college and mostly hanging out with my boyfriend at the beach. This is a photo of my son, who’ll be going to my alma mater in the fall: same beach, better hair.

The point of all this sad history is to reflect on what happened this weekend, when my 20-year old son asked me to help him with his ballot, and I said "sure."

I was old enough to vote, there was an election, what did I know? I called up my father, dutiful daughter that I was, and asked, “who should I vote for?”  My dad, dear man, fiscal conservative and social liberal that he was (as only those raised poor who moved to Northern California in the 1960s can be) said, “vote for Ronald Reagan.” And so I did. 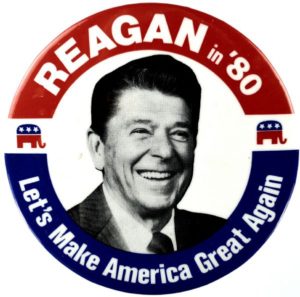 We will pause now so all my Reagan-hating friends can calm down and catch their breath. My husband (chief among the Reagan haters, since about the time Ronny signed his Cal diploma in the early ’70s) has long forgiven me and loves me to this day. 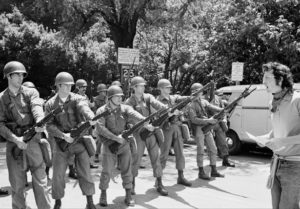 A protester faces down California’s National Guard in May 1969. AP (see more here.)

What did I know about voting? I knew to call on someone I trusted and not to ask too many questions. I knew that I didn’t really care. (Yeah, I know, talk about your naive middle class educated white privilege college kid — and take a couple of deep breaths, if you need another moment to calm down.) As soon as I got into the world, started working, paying rent, etc. etc., I changed my tune. I confess I don’t remember if I voted for Mondale in 1984 (I’m sorry, I’m a slow learner), but I know for sure I was a Dukakis supporter in 1988.

The point of all this sad history is to reflect on what happened this weekend, when my 20-year old son asked me to help him with his ballot, and I said “sure.”

We sat at the kitchen table, spread out the mail-in ballot and talked about the choices for about 45 minutes. I explained to him the history of the US Senate seats in California, and how this year is a big deal since Barbara Boxer is retiring after so long. We talked about Kamala Harris and Loretta Sanchez and what a great thing it is to have two women of color as the best options. We tried to figure out what Prop 50 is about and didn’t get very far with that. I sent him to the internet. We talked about Mike Honda and Ro Khanna and discovered that my husband and I have canceled each other’s votes this year — I went for one and he for the other (not telling). We pulled the awful negative ads against Nora Campos and Jim Beall out of the recycling bin and tried to decide if we could make an informed decision amidst all that yelling and ugly-face pulling. I told him how great I think it is that the current mayor of Cupertino, Barry Chang, who is running for state assembly, has printed his poetry on his campaign flyers! English and Chinese! 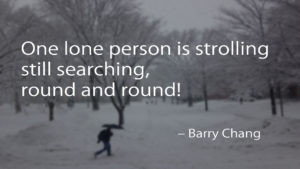 The one thing we didn’t talk about is who my son will choose for president. I already know. We’ve been talking about it at the dinner table for months. And months. He and his sister are big Bernie fans. Feel the Bern! Bring on the revolution! My husband and I are staunch Hillary supporters. 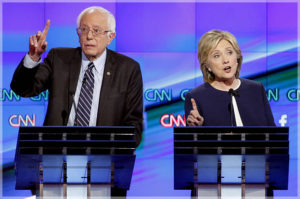