Prompted By Lost in Space
5 comments. 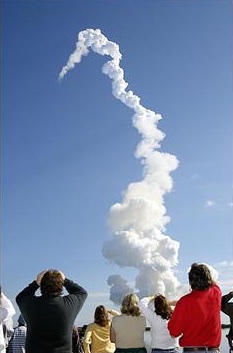 The morning’s bright sun was so high that the slender palms lining the university walkways dispensed shade only to themselves. The fountains provided no respite from the sizzling heat, the drops evaporated almost before they hit the surrounding steps. The scorching glare lit up the concrete paths, runways for hurrying students with prospects as bright as the Arizona sun, futures bursting with possibility, potential, promise. Those with purpose studied in the library, the rest took refuge in the Student Union, where the air conditioning attempted to counter the warmth of radiant bodies but alleviated none of the sizzling friction of teenage desire. This focal point of the Arizona State University campus offered equal amounts of respite and tension between classes, depending on whether one went there to study or to party. The building was a magnet for gossip and news, a hub for events of monumental importance to no one but students absorbed by campus life.

A normal day shattered by disaster.

Everything seemed easy and carefree, the college years merely a countdown towards real life, the distant abyss whose depth could not be fathomed except by imminent graduates peering over the edge. The big issues concerned the weekend’s parties, the choice of dates or lack thereof, the chances of the football team. I was sitting in the Student Union’s cafeteria, reading the assignment for my next class when I felt a ripple of rumor and hearsay suddenly sweep through the crowd, growing into a tidal wave whose surging crest foamed with fateful words: Catastrophe! Disaster! Tragedy! Suddenly I was caught in the undertow that pulled me and everyone else towards the downstairs lounge. The big screen TV, usually ignored during the day except by soap opera junkies, had everyone mesmerized. All conversation had stopped. The silence was only interrupted by the sobs of those sitting up front. I stood on my toes to catch a glimpse and saw a burst of white smoke against an impossibly azure sky. The daytime fireworks display had fiery trails that wrenched my throat and stomach as they descended towards the ground. The crowd was riveted as the space shuttle exploded over and over and over again on CNN. I felt as if awakened from a dream, the one where enormous and unexpected disasters only exist in the distant past.

5 Responses to A Day on Campus