Prompted By Lost in Space
4 comments. 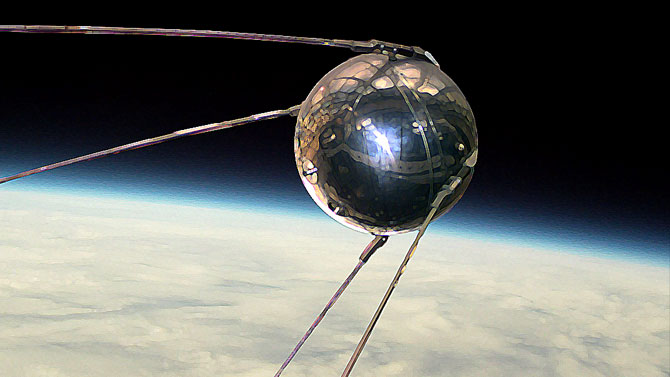 We lived at the edge of a forest in Massachusetts. The hay field across the road served as a planetarium surrounded by stone walls and maples. From there, the night sky unfolded for us: an unusual moon, the northern lights, an eclipse, but now. . . who could predict?

“Tonight!” My old man shouted. “Sputnik! It’s going to orbit right over our heads. We’ll be able to see it.”

“I thought it was the size of a basketball,” I mumbled. “How’re we gonna see it?”

“Look it up. Plug in the ratio of lumens as a function of sphere circumference and distance. . .”

“Distance?” I grumbled. “Distance to what?”

“In this particular situation, my boy. . .” My old man liked to imitate W.C. Fields, Groucho Marx, Jack Benny. That night he was W.C. Fields. “The distance from satellite to earth and sun to satellite, the circumference of the sphere. From our vantage point (nobody said POV back then), it should look like an orbiting Venus.”

“Won’t that be lovely,” my mother chimed in. “Venus. Like Botticelli, in that clamshell, for the whole world to see.” My mother was an exhibitionist.

My old man pushed away from the table. He lit the sticky-sweet, cherry-stink tobacco in his five-dollar, Huckleberry Finn, corncob pipe and gazed up at the darkening sky. “For the whole world to see.”

Most people looked upon the unblinking mini-moon as a threat. The Soviets had shot the damned thing up there with a super-powerful spaceship, proving they could send anything anywhere. The Ruskie satellite orbited the heads of humans worldwide, a lighthouse for the devil. “If the commies can do that,” our authorities told us, “they can do whatever they want.” They would then elaborate, giving specifics about whatever aspect of the communist threat was being featured that week.

“Paranoid bullshit.” A backhand flick of the wrist dismissed the partisan fears. My old man was beyond all that. “Give it time. That little ball is going to unite the world.”

Now the family stood in the meadow gazing upwards into the sprawled bowl of stars. Would Sputnik drift? Would it float? Would it crawl so slow as to render its orbit imperceptible, the way the planets sidled across the night sky? Or would it fail, descend, and burn out like a meteor?

“There!” I shouted, my voice adolescent and shrill. A small orb, gleaming with mercurial clarity, broke over the treetops from the east and glided, slow, smooth, and silent across the cold New England sky.

“That’ll make the Pentagon crap in its pants,” my old man said.

Amid Cold War infestation, my old man managed to impart a love for the patterns and structures and physics of astronomy in his son. Despite my resistance, my father’s spiritual, non-religious enthusiasm for the music of the celestial spheres had infected me with curiosity about the world, the planets, the solar system, the galaxy, and how the entire fucking Universe might operate.

I thought sputnik was beautiful beyond belief.