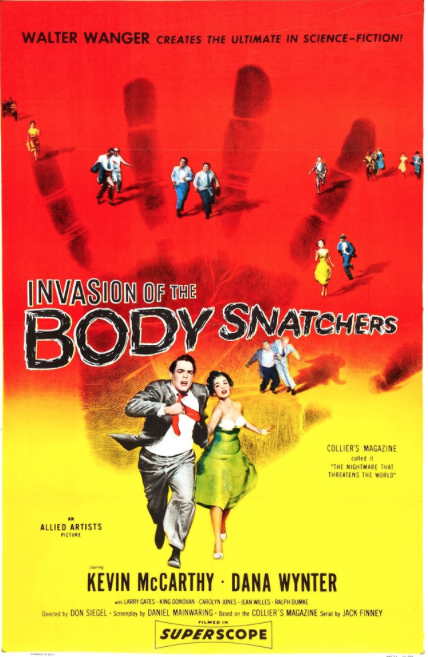 The first sci-fi movie I remember seeing was The Invasion of the Body Snatchers. It came out in 1956, but I saw it a few years later on TV.

Could someone do that, steal who you were, and why would they do that?

I’m pretty sure it was one of the weekend nights my parents were out, leaving the four of us kids to fend for ourselves. I loved these nights! My older brothers were in charge, if you could call it that, so it was essentially a no-rules evening. Which really only amounted to pretending, if only briefly, that we could do whatever we wanted—quite the luxury to a kid. This mostly involved playing high–volume hide and seek, ordering late-night takeout pizza, and giddily jumping on my parents double bed, something we were absolutely not supposed to do, but which was so much fun it was worth the inevitable scolding we later got. I’m certain we destroyed that bed.

One of the hallmarks of being the youngest is that you grow up faster than older sibs. By the time I was around eight years old I knew every top-forty hit of the ‘50s. I never had a chance to believe in Santa Claus or the Easter Bunny. And it also meant that we didn’t watch kids’ TV or movies (except for Saturday morning), which is how I got to see many things I shouldn’t have, and didn’t understand until much later.

Body Snatchers is a cult classic, remade in 1978. If you haven’t seen it, it’s about the residents of a small town who begin to suspect that their neighbors are being replaced with almost perfect doubles. There’s no violence or gore; it is a psychological thriller. Thinking about it now, I recognize it as a paranoid allegory of the Cold War threat of those nasty Russians. (They’re coming to get us!)

But it was scary. Although I wasn’t nearly as scared as my sister, who was completely engrossed and curled up in a ball on the couch oblivious to the fact that my brother was poised to toss a ball into her lap, just because he could. She nearly jumped out of her skin.

But I was scared at a more primal level. I was only just beginning to even have a sense of self, so the idea that it could be stolen was terrifying. Could someone do that, steal who you were; and why would they do it? I couldn’t figure out what possible reason aliens would have for this. I knew there was something I wasn’t understanding, but the feeling of powerlessness was a powerful lesson. Don’t let anyone steal who you are! This is not easy even in today’s world, but for a girl growing up in the ‘50s and ‘60s it was a constant battle. It’s a wonder any of us survived.

As I recall, the movie didn’t have a happy ending. Even so, my imagination crafted a vastly more insidious one. I suppose that’s the mark of good drama.

One Response to Body Snatchers