My mother was the secretary for her ninth grade class. They graduated in 1953 in Newton, Massachusetts. By the time she and her friends had finished three years at Bigelow, the class had been together for three years. They knew each other well, having grown up together, many of them in the same elementary school also. As class secretary, it was her responsibility to address the graduating ninth graders with words of reflection and wisdom. Apparently my mom was an aspiring literary scholar, and she wrote a three page poem in rhyming couplets. I offer it here for your entertainment (assuming none of you, dear readers, are graduating ninth graders today). 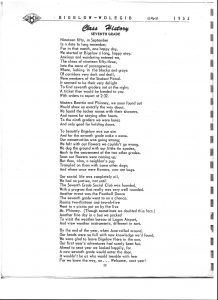 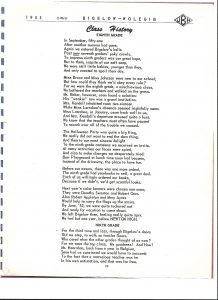 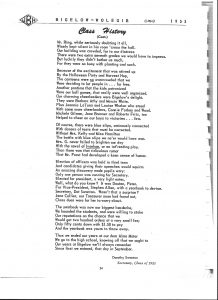 I have photographed the pages directly from her yearbook, and the miracle of technology allowed me to quickly create a more readable version, below.

My mother never tried her hand at school poetry again, that I could determine, but she was awarded the Girls Senior Cup (Newton High School, 1956). I’m happy to have the cup in my house, now, hanging out on the mantel with photos of many other graduations and plants and water polo trophies. It was hard to photograph, so you’ll see something of my “selfie” in the silver reflection. I miss my mom. I wish I’d know she wrote poetry when she was younger, before she was gone. 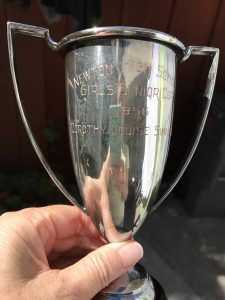 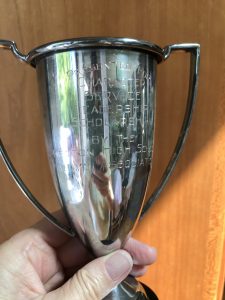 Nineteen fifty, in September
Is a date to long remember;
For in that month, one happy day,
We started at Bigelow a long, happy stay.
Anxious and wondering entered we,
The class of nineteen fifty-three,
Into the maze of passageways
Where, lurking in the blacks and grays
Of corridors very dark and droll,
Were members of the Student Patrol.
It seemed to be their very delight
To find seventh graders not at the right;
A ticket then would be handed to you
With orders to report at 2:32.
Misters Beattie and Phinney, we soon found out
Would show us exactly the way about.
We found the locker rooms with their showers,
And rooms for staying after hours.
To the ninth graders we were bores
And only good for holding doors.
To beautify Bigelow was our aim
And for the seventh grade make a name.
Our conservation was going strong;
We felt with our flowers we couldn’t go wrong.
We dug the ground with our little tin spades,
Much to the amusement of the two other grades.
Soon our flowers were coming up;
But then, alas, a neighbor’s pup
Trampled on them with some other dogs;
And where once were flowers, now are bogs.
Our social life was completely nil,
We had no parties, not until
The Seventh Grade Social Club was founded,
With a program that really was very well rounded.
Another event was the Football Dance
The seventh grade went to on a chance.
Rooms two-thirteen and two-oh-five
Went to a picnic put on by the live
Mr. Phinney. (Though sometimes we doubted this fact.)
Another fine day in a bus we packed
To visit the weather bureau at Logan Airport,
And view weather instruments, different in sort.
By the end of the year, when June rolled around,
Our heads were so full with new knowledge we’d found,
We were glad to leave Bigelow there in the sun.
Our first year’s adventures had surely been fun.
Ahead to next year we looked happily, for
A new seventh grade would enter the door.
It wouldn’t be us who would tremble with fear
For we knew the way, so … Welcome, next year!

In September, fifty-one
After another summer had gone,
Again we entered Bigelow’s halls
Past new seventh graders’ poky crawls.
To impress ninth graders was our great hope,
But to them, in spite of our soft soap,
We were still little babies, younger than they,
And only created to spoil their day.
Miss Bruce and Miss Johnson were new to our school;
But how could they think we’d obey every rule?
For we were the eighth grade, a mischievous class,
We bothered the teachers and walked on the grass.
Mr. Baker, however, soon found a solution:
His “weakie” row was a grand institution.
Mrs. Kendall inhabited room two-sixteen
While Miss Larrabee’s absence seemed frightfully mean.
Miss Larrabee, in January, came back well to us,
And Mrs. Kendall ‘s departure aroused quite a fuss.
We know that the teachers must often have paused
To remark over all of the trouble we caused.
The Halloween Party was quite a big fling,
We really did not want to end the darn thing.
And then to our most sincere delight
To the ninth grade canteens we received an invite.
At many activities our faces were spied,
And also to make changes we desperately tried:
Burr Playground at lunchtime soon had become,
Instead of the driveway, the place to have fun.
Before our exams, there was one more ordeal,
The ninth grade had yearbooks to sell, a great deal.
Each of us willingly ordered our books,
Because if we didn’t, we’d get scornful looks.
Next year’s color bearers were chosen one morn;
They were Dorothy Swanton and Robert Gorn.
Also Robert Appleton and Mary Ayres
Would help to carry the flags up the stairs.
By June, ’52, we were quite tuckered out
And ready for vacation to come about.
We left Bigelow then, feeling really quite spry.
We had but one year, before NEWTON HIGH.

For the third time and last, through Bigelow’s doors
Did we step, to walk on familiar floors.
Who cared what the other grades thought of us now?
For we were the top class. My goodness! And How!
Mr. Hanrahan, back from a year in Belgium,
Soon had us convinced we would have to succumb
To the fact that a marvelous teacher was he
In his own estimation, and that was for free.
Mr. Ring, while seriously doubting it all,
Wisely kept silent in his room ‘cross the hall.
Our building was crowded, for to our distress
There were two extra seventh grades we would have to impress.
But luckily they didn’t bother us much,
For they were so busy with planting and such.
Because of the excitement that was stirred up
By the Halloween Party and Harvest Hop,
The canteens were so overcrowded that we
Were deciding to let people in … for free.
Another pastime that the kids patronized
Were our ball games, that really were well organized.
Our charming cheerleaders were Bigelow’s delight.
They were Barbara Athy and Marcia White.
Plus Jeannie LaTona and Louise Whelan who stood
With some more cheerleaders, Connie Forbes and Wood.
Michele Gilman, Jane Brenner and Roberta Fritz, too
Helped to cheer on our boys to victories  … few.
Of course, there were blue slips, ominously connected
With dozens of tests that must be corrected.
Without Mrs. Kelly and Miss Hamilton
The battle with blue slips we ne’er would have won.
Mrs. G. never failed to brighten our day
With the novel of Ivanhoe, or an int’resting play.
Then there was that ridiculous rumor
That Mr. Frost had developed a keen sense of humor.
Election of officers was held in third term
And candidates giving their speeches would squirm.
An amazing discovery made pupils wary:
Only one person was running for Secretary.
Elected for president, a very light eater,
Well, what do you know? It was Dauten, Peter.
For Vice-President, Stephen Allen, with a yearbook to devise.
Secretary, Dot Swanton. Wasn’t that a surprise?
Jane Collier, our Treasurer soon had found out,
Class dues were for her to worry about.
The yearbook was now our biggest headache,
We hounded the students, and were willing to stake
Our reputations on the chance that we
Would get two hundred orders at a very small fee;
Only fifty cents down with $1.50 to pay
And the yearbook was yours to throw away.
Thus we ended our years at our dear Alma Mater
We go to the high school, knowing all that we ought to
Our years at Bigelow we’ll always remember
Since first we entered, that day in September.

One Response to Advice From Your Class Secretary