Prompted By Rites of Passage
12 comments. 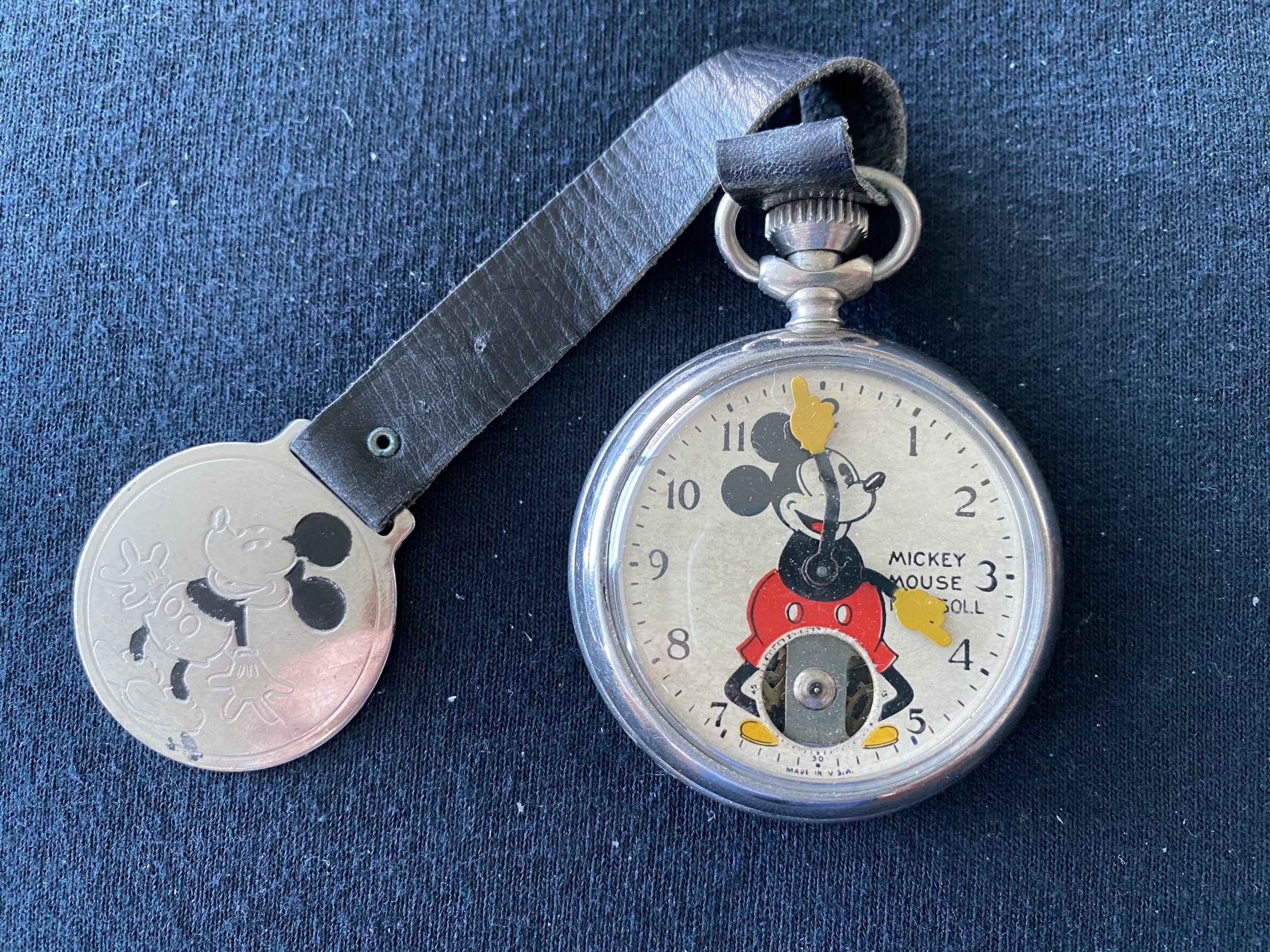 In Judaism, turning thirteen is a big deal. For generations, boys were called to read from the Torah in a ceremony called a bar mitzvah, which marked their entry as an adult into the Jewish community. This was a boys-only club until March 18, 1922, when American rabbi Mordecai Kaplan held the first bat mitzvah in the United States for his daughter Judith. Still, it was rare for a girl to have one. My mother didn’t. Even though both of my brothers celebrated this rite of passage, I did not.

My daughters and, more recently two of my granddaughters, celebrated b’not mitzvah (plural). I am sharing stories from three generations. My father’s written recollection of his bar mitzvah in 1934, and my reflections written when my younger daughter and granddaughters celebrated theirs.

THE WAY IT WAS
By my father, Sidney Levine, in honor of his first grandchild’s Bar Mitzvah, which was also the 50th anniversary of his own Bar Mitzvah

My Father at the age of his bar mitzvah

June, 1934… Year two of the New Deal. June 30th, the red-letter date. The week begins with the onset of an early summer heat wave. Temperatures hover near the triple digit mark. Blazing sun. Stifling humidity. Preparations are under way. Mother, tantes [aunts], neighbors, friends – all are engaged in an orgy of cooking and baking. Chickens are plucked and broiled. Fricasses, chopped liver, tsimmes, kishkas, kasha, lokshen, mandlen, challes, tayglech, mandel brot, and strudels — all are in various stages of completion. Large pots boiling on stoves, ovens are all ablaze. Every icebox and precious refrigerator in the neighborhood is stuffed with the overflow of this productivity.

Meanwhile, the focus of this sweaty, frenzied activity is absorbed in the daily heroics of the new “Samson,” Hammering Hank Greenberg, who has come as a messiah to lead the beloved Detroit Tigers out of the American League wilderness to their first pennant in a quarter century.

Saturday morning dawns with sun and heat unabated. The “man to be” is adorned in the new suit – 100% wool worsted, tan color, belted back jacket and knickers. The neighborhood shul is filled to capacity with 125 perspiring souls — women in the balcony, a collection of bearded elders wrapped in ankle length taleism surrounding the bimah. At the center stands Rabbi Moldowsky, awesome with a red beard and shining penetrating eyes in a stern visage — father of ten or twelve, advisor, interpreter, philosopher, and shochet [kosher slaughter].

Now, in a quick singsong, the blessings are chanted, followed by the Haftorah and the closing blessings. Then comes a five-minute break for “the speech” — obligatory thanks to mother and father and to the United Hebrew Schools for inspirational tutelage, promises to work diligently for the betterment of mankind and Judaism, and to remain steadfast in the study of Torah. Finally, the descent from before the Ark to a shower of candies from the balcony, and it’s over.

Sundown, and all the food comes forth from the secret hiding places and is lugged up to the Parkside Social Hall, a sparse room over the main business street store fronts. Tables and chairs have been set up. A small area has been cleared for the band and dance floor. The music is Morris Witcoff, violin virtuoso, and his Troubadors, specializing in freilichs, waltzes, Russian shers, polkas, and an occasional American fox trot. The endless dinner is punctuated by well wishes and greetings in appropriate order from relatives, friends, and officers and directors of the Landsmanschaft Society. A procession of gifts – the inevitable pen and pencil set, a siddur, a chumash, a tie clasp, envelopes with $2.00 and $3.OO in cash, a rare $5.00 bill, and a Mickey Mouse watch.

The “Bar Mitzvah” and a handful of boyfriends cavort in a corner. Batting averages and individual athletic heroics are loudly discussed. Trading card deals are arranged. Teachers and sundry elders are mocked and mimicked. Across the room are the girls, the older sister and a few daughters of relatives and friends. A constant chatter and giggle prevail. Never the twain shall meet. By 10:00, the “man of the day” and the older sister are dispatched to the babysitter who has been minding the younger brother and sister at the house about a block away. Their big day is ended. The adult revelers go on and on.

The only memento of all of this — the [Mickey Mouse] watch [featured image] — is now in Jonathan’s [my son, his grandson] proud possession. 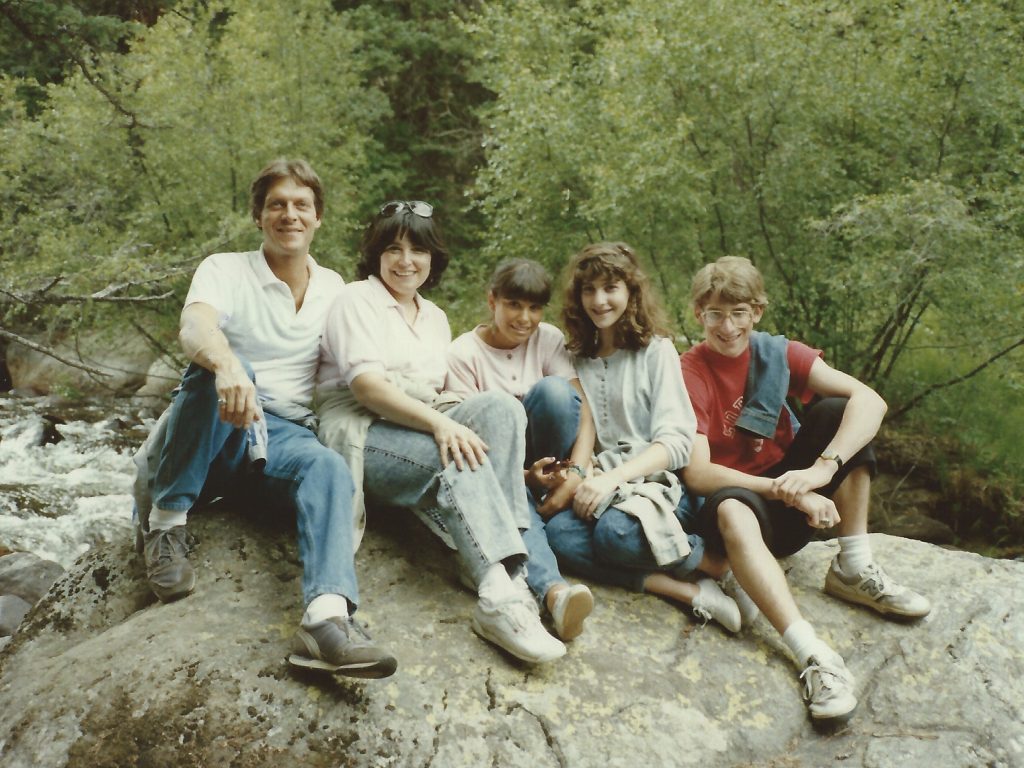 Taken in 1988 on our national park tour

ON THE OCCASION OF OUR YOUNGEST CHILD’S BAT MITZVAH

January 27, 1990:  I wrote this for our youngest child’s Bat Mitzvah, ironically entitled “Rites of Passage.” At this point, our oldest was a freshman in college, and our middle child was “Sweet Sixteen.” I was feeling like this event marked a huge passage for our family as well as for our daughter:

Bat Mitzvah – rite of passage, coming of age
Yours… ours
How did this happen so quickly?

After the trips to the zoo, spilled milk, bedtime story marathons, birthday parties, skinned knee hugs… Are you really this grown up?

We remember countless rides to Detroit (Are we almost there?). Countless birthday parties and clan gatherings. Cousins by the dozens.

We remember Israel – heat and crowds, relatives and ruins, splendor and sights… and almost losing you while buying a tallit for your older brother in the Old City.

We remember our humble tent amidst the waterfalls and glories of Yosemite… the breath-taking coast of California – clamoring down trails, running along beaches, awed by giant Redwood and Sequoia.

We remember paint box colored arches, magnificent canyons, a horseback ride through the majesty of Zion – and the decadence of a night at the Biltmore.

We remember spelunking through New England’s caves, watching whales spout on the Cape, “circling the square” to leave Harvard Yard.

Sharing special times, sometimes with family and friends, always with each other – we have all come of age… together. 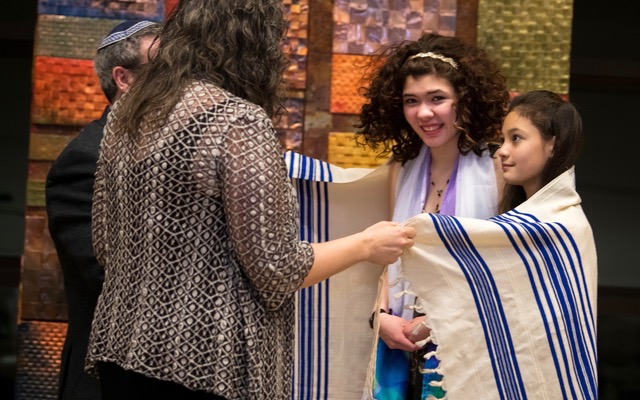 B’not Mitzvah of our granddaughters, February 23, 2019

I have been writing about how many religious communities have no place for people with disabilities since I started blogging in 2013. Having grandkids with special needs can do that to a grandmother. I have heard explanations from “we don’t do that” to “we have to create something separate to accomplish that.” But all along, the answer was very easy. Just open the door.

That happened for my family at the Jewish Reconstructionist Congregation (JRC) in Evanston, Illinois. When my twelve-year-old granddaughter started preparing for her Bat Mitzvah, her fifteen-year-old sister, who has a significant language disability and is anxious in front of crowds, requested to have one as well. She claimed she wanted to be on the stage and her little sister generously agreed to share her big day.

My daughter cautiously broached the topic with Rabbi Rachel Weiss. In the past, at other congregations, including her older child was a big deal. At JRC, it was simple. We brought her to services meant for everyone, regardless of differences. All were truly welcome. If she focused on her phone or sat when she was supposed to stand or drank water during the Yom Kippur fast, no one cared. Perhaps it was the feeling of belonging plus her love for all of the music in the service that made her comfortable. She started following the service in the prayer book, and then came her big ask. She wanted to have a Bat Mitzvah like her little sister.

Turns out, if one is flexible and accommodating, technically all she had to do was to be called to the bimah to recite the blessings before and after the Torah reading. She practiced those blessings but we had no idea if she would recite them in front of a congregation. To our amazement, she did, but she did much more. Rabbi Weiss and Cantor Howard Friedland respectfully asked her if she wanted to carry a Torah. She did. She danced with joy as she proudly carried hers next to her sister. Each time there was an opportunity to participate, they asked if she wanted to try it. Would she let her grandfather wrap her in a tallit (prayer shawl)? She did. Did she want to come up so her parents could tell her how proud they were of her. She did. Would she like to join her little sister on the bimah to receive the priestly benediction? Yes, please.

After so many years of trying to find ways to include my granddaughter in religious life, in the end the answer was simple. Just open the door, invite her in, and ask how can we help you be part of our caring community. 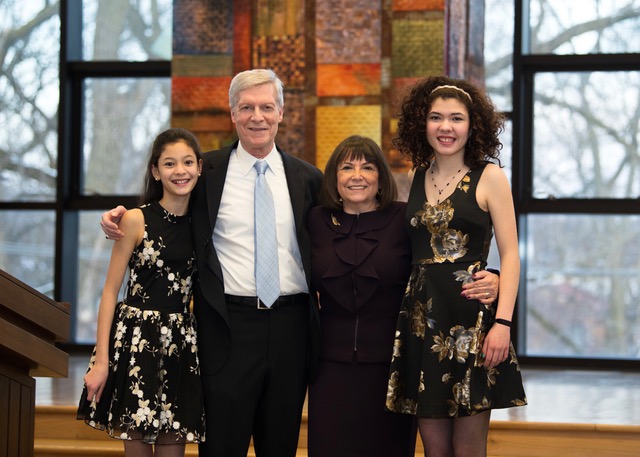 A Degree Day of Observations
by Marian

Tattoo Me
by Barbara Buckles