Being a Pet of Mine May Be Hazardous to Your Health! by Mike Repucci
10
(13 Stories) 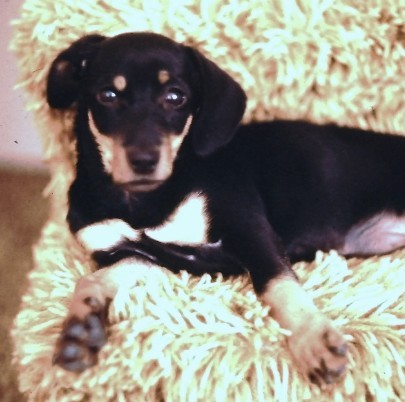 My childhood pets included dogs, a pair of gold fish a free-range parakeet and a friendly chicken.  Unfortunately, all of whom – or which – met tragic ends.

The gold fish story first, as it is the first pet I remember.  There were 2 of them living in a little round globe.  My brother and I dutifully and responsibly took care of them which, since we were both under 5, meant we fed them once in a while, leaving the rest to my mother.

On a cold winter morning one of them was found, floating belly up, awaiting transport to the bathroom for burial by toilet.  My dad carefully analyzed the situation and determined “Goldie” had died because the water had gotten too cold overnight.  To remedy that life-threatening situation he poured some warm water into the bowl.  In a few minutes Goldies’ partner in life was also awaiting burial at sea.

Next, to the dogs in my life; and no, I am not referring to old girlfriends or bad relatives.  We had several dogs over time all of them strays or puppies obtained from various sources.  There were big ones and small ones in all colors and mixes of breeds. The only thing they all had in common is that there came a day when we’d ask where Fido or Spot was and learned they had wandered onto the busy two lane road we lived on and were now in that Big Dog Kennel in the Sky.

We also had a very unique parakeet.  It could of course, talk but it was so domesticated we never had to put it in a cage.  It had free range of the house, living on a parakeet playground my dad had made.  One morning “Tweety” was gone.  If I remember right, it was on a morning just after we’d gotten the only cat we ever had as a pet.

The chicken is last.  We had a few, one of which we raised from a chick, so it was very tame.  It would perch on the window sill outside our kitchen where our family ate our meals.  Yes, Mrs. Cleaver, it was long ago when people still did that.  This chicken watched us eat nearly every meal.  One Sunday afternoon, while eating a chicken dinner…Well, I don’t need to go further if you can imagine the look on my fathers’ face when we kids wondered aloud where “Mrs. Henny Penny” might be.

Those childhood traumas probably contributed to my lack of desire to have a pet until after Patty and I got married.  I’d gone back to college and had morning classes.  She worked swing shift, so we saw little of each other except on days off so we decided to get a dog for company.  At the local pound a black and brown Terrier/Dachshund mix picked us as we walked by the cages.  We took her home and named her Sophie, after Sophie Tucker.

Sophie quickly wormed her way into our hearts.  She never ceased to impress us.  She could climb trees so I once had to retrieve her from the hollow limb of a dead tree hanging over the river.  If you pointed at the ground and told her to dig, she would, and not stop until we called her off, periodically lifting a dirt-covered face to see if we were satisfied.

She loved to roam free and brought us her found treasures such as a dead bird, once someone’s thawing turkey breast and, more than once, the sack lunch of some workman.  When we went canoeing she stood in the bow watching everything.  If she needed to use the facilities, she’d swim to shore then back to the canoe.  Whenever we put on jogging shoes she had fits knowing a run was in the works.

She did have some foibles.  When running off for an adventure, she wouldn’t look both ways when crossing the street.  Her spot in our VW Bug was standing on the back seat with her front paws on our seats so she could look between us and help drive.  One night, as we stuck her head between us, she was smacking her lips.  To say her breath was foul understates the stink of the cat poop she was eating.  That night she took a trip over the back fence instead of with us.

She loved to get out on garbage day to explore.  On one such day she ate something that poisoned her and she passed on despite our vets best efforts.  We tried to replace her with a Dachshund puppy a few years later.  But Heidi, while loveable and easy going, learned few tricks, had no special talents so was no Sophie!  Eventually, Heidi had a stroke and we had to put her down.  We’ve had no pets since.

I’m sure there are other lessons to be learned from losing all these pets, but the most important one for me is, I don’t dare use “My Pet” as an endearing nickname for my wife!

8 Responses to Being a Pet of Mine May Be Hazardous to Your Health!