One day back in 1976 a German shepherd came out of nowhere to show up at our kitchen door. He was not emaciated; he looked good. But he was thirsty, so we took care of that. He decided to move in, sleeping in the mudroom of our tiny rented cottage in a dusty southern Idaho bean field.

Naturally, it would have been high-desert sagebrush as far as the eye could see. But in the early 1900s men dammed the Snake River, tore out much of the sagebrush, and dug many miles of irrigation ditches. Because potatoes, sugar beets, and other crops grew well in the volcanic soil with the simple addition of water, the wide plain on both sides of the river was named “The Magic Valley”.

The dog was confident, noble — a gentleman among canines. He had no collar, but was easily identified by a permanently burst blood vessel in his left eye. He also was fearless, loyal, and smart. Cate, my partner, named him Rex. We had both been afraid of shepherds (my mom called them police dogs) in the past, but Rex never showed the slightest mean streak. In fact, nothing rattled him.

Maybe he needed companionship. When we took him camping in the Sawtooths, we realized he must have spent a stretch of time on his own. We brought dry dogfood, but around the campsite he would spend half an hour or so standing over a ground squirrel’s hole, tensed for a lightening-fast lunge. When the squirrel finally stuck its head up to see if the coast were clear, that head was immediately in Rex’s teeth. He would tilt his head back, chomp the rodent’s body a few times (we heard bones cracking), and swallow the squirrel whole. He repeated this several times a day, on every trip we took him on.

One weekend we camped at the base of a steep foothill covered with stiff, dry grass. It was mid-morning on a cloudless day. The sky was that enchanting dark blue that you only see out west because of the low humidity. Cate and I were both reading Even Cowgirls Get the Blues, by Tom Robbins. It was her turn with the paperback, so I decided I needed to see the view from the top of the hill. Cate counseled against it, as it was quite hot already, but I felt I had a mission. Rex came with me.

The hill was higher than it looked. And when Rex and I got to the top of the ridge we discovered a slight dip, then an even steeper, rockier incline leading to higher ridge with only sky behind it. The dip completely hid this second ridge from the campsite, so Cate lost sight of us, and started to worry. Rex and I certainly were not about to turn back in defeat. We had no water, but we had tenacity. When we took breaks, Rex seemed glad for the opportunity to lie down, panting hard. It was tough going in the heat, but we continued climbing. It was all worth it: The view from the ridgetop was breathtaking. The slope on the other side was even steeper than what we had scaled, with no vegetation. And out beyond, rows of majestic snowy peaks stretched to the horizon. The breeze from that direction was chilly. It was getting toward late afternoon, so we headed back down to the campsite. The descent was a lot quicker, but we found Cate quite upset. We had been gone for hours.

Around the campfire that night, when the air had cooled, my sweat had dried, and emotions had settled, Cate told me about a passage she read in the Robbins novel while I was climbing. It was a metaphor comparing joy, fleeting as it is, to a butterfly — all one can do is tilt his/her head back and hope to kiss the butterfly as it passes over. The best part was that a tiger swallowtail landed on her arm shortly after she read that passage, and stayed for more than a minute.

Life flowed on that summer, our last summer before parenthood. Those were good days. We both had rewarding full-time jobs in Twin Falls, about 10 miles away. We had finally found a way to live in the country. If you knew Rex, you would agree that locking him in the house or chaining him outside were both unthinkable. He was free to wander, and he always showed up before dinner. After dinner, we would sit on the front porch on an old, dusty sofa. Rex would lie on the wooden slats beside us. We would look across the little-traveled road to an expansive alfalfa field. In the distance one balmy evening, our farmer landlord and his sons were mowing it for hay. There was a sweet smell in the air.

One September evening Rex didn’t show up. We called the police station in Kimberly, a parched crossroads hamlet three miles to the east. They had Rex, who had been brought in by an angry resident who owned 12 pet cats. Before Rex loped into town that afternoon, he’d owned 13 cats. There might have been a small fine, but I don’t think there were any licensing or leash laws. Hell, just the concept of zoning was being suggested for the first time by a couple of local environmentalists. Rex was glad to see us.

A week later it happened again. Rex had killed another of the man’s cats. We never met the man, never learned whether or not Rex had eaten the cats. This time the police conveyed the complainant’s warning to us: If it happened a third time, he would shoot Rex.

It took us a few days to decide what to do. We kept Rex in the mudroom while we were at work. We decided we had to let him go, farther out in the country. On Saturday we drove Rex about 45 miles to the south, toward the Nevada border. The irrigation ditches didn’t come close to this land, where the cattle ranches were miles apart. In between were low, rocky hills of sage, punctuated by willow bushes and the rare cottonwood tree along the creeks. On his white plastic flea-collar we had tried to tell his story with a ball-point pen. The only words I recall writing were “I AM NOT LOST”.

I did a U-turn. Behind our parked car, with a ranch visible in the distance, we hugged and patted Rex, who seemed to be anticipating another fun hike. We said goodbye, jumped in the car, and drove off. The car picked up speed. We went over a hill and could no longer see him running after us. We were crying.

Months later, on our wedding day, the stars aligned for me to see Rex one last time. Though we would host a restaurant dinner and a dance party at our cottage later that night, our late-afternoon wedding was not fancy — far from it. We invited only four friends to the service at the Twin Falls YWCA. The one who was a photographer forgot his camera. And we had gone to work that Friday for most of the day. The front of the building where I worked faced one of the main roads in town. Coming down the steps, I thought I saw Rex in the back of a faded red pickup truck. I ran, following the truck. A stoplight helped me catch up, and then the truck turned to park in front of a hardware store two blocks down. It was Rex all right, red eye and all. He was wagging his tail; he recognized me. While I was petting and talking to him, two men came out of the store. They were ranch hands from the area where we had released Rex. They said he had become the ranch’s “barn dog,” eating mostly cottage cheese! I imagined side dishes of rodents, but I didn’t ask about the cottage cheese. I didn’t think there were any dairy farms down that way, but then the ranches tended to be rather self-sufficient — many must have milk cows and make their own cheeses. I didn’t ask if the ranch had cats, either, but maybe ranch cats can take care of themselves. I suppose I digress here for the same reason I didn’t want those guys to drive off. But they did.

We’ll never forget Rex. We still feel blessed that he adopted us for a while. 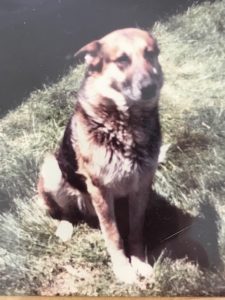 I Know You’re Here Somewhere
by Gary Faules
Skippy and Chester
by Susan
A boy’s best friend.
by stjamie