Prompted By My First Car
3 comments. 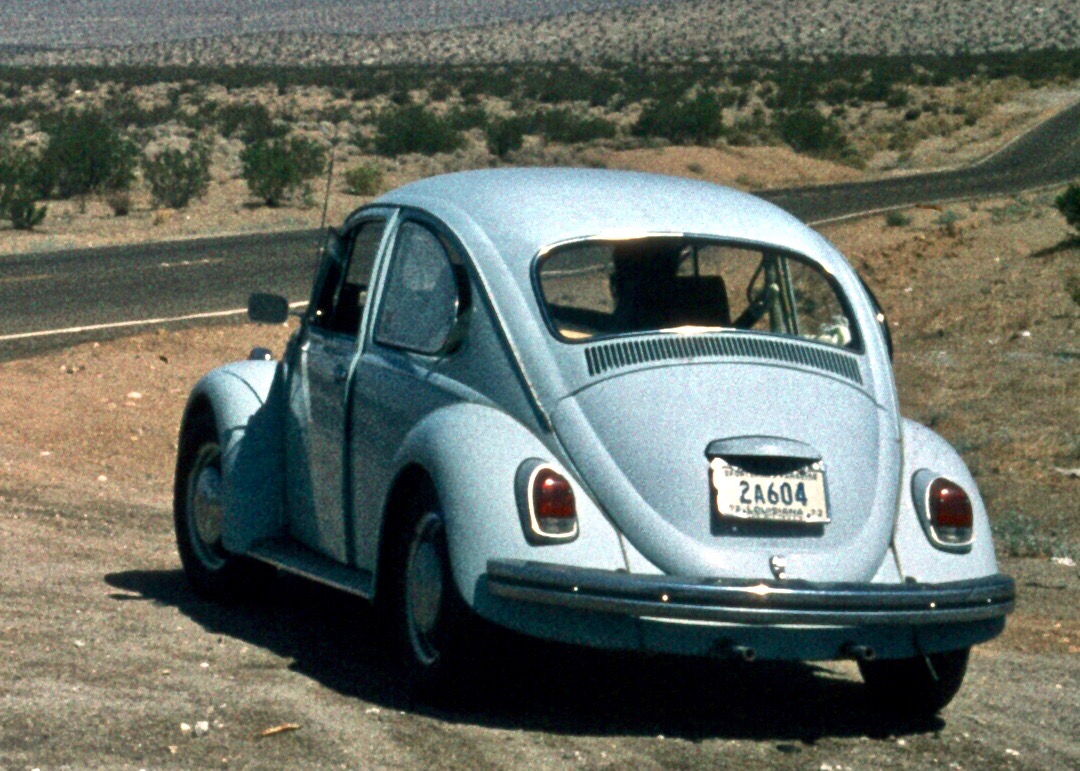 As a college graduation present, my parents bought me a new, light blue, 1968 Volkswagen Beetle at a cost of $1,968. It was my dream car, nimble, maneuverable, and easy to park. Still, that summer, it landed me in court. I had parked downtown to pick up some maps for a cross country trip. When I returned there was a parking ticket on my windshield. I had noticed the “No Parking” signs before I had parked, but these two portable signs had been placed facing one another only a foot apart. I assumed this positioning indicated that the parking restriction was suspended for some reason. With nothing better to do I drove home, grabbed my camera, and returned to photograph the signs. I mailed in the ticket indicating that I would contest it.   On the appointed day, my parents and brother accompanied me to the court. The judge asked the ticketing officer to state the basis for the ticket, and the officer said that I had clearly parked in a “no parking” area. I presented the judge with my photographs. He looked, turned to the officer, and asked, “Have you seen this.” Case dismissed. We went out to lunch to celebrate my legal victory.

…the waves reaching up the beach and pulling my sleeping bag with me in it out to sea.

Within a few months I had packed my bug to the brim with everything I would need to relocate and begin graduate school. It was my first long solo trip, over 2,000 miles from New Orleans to Berkeley, camping along the way. In Picacho Peak State Park, Arizona, I was setting up my camp is a remote site with no other campers around when the ranger came by and asked if I intended to sleep on the ground. “Yeah,” I answered. I had been doing so every night. He advised against it, informing me that there were large rattlesnakes around and that I might be safer sleeping on top of the picnic table. Sufficiently alarmed, I decided instead to unpack the thoroughly impacted VW and sleep crunched up in the tiny seat. It was a fitful night, especially once a lightening storm came and lit up the sky.

In the morning I repacked the car and hit the road for San Diego. It would be my first view of the Pacific Ocean. I drove immediately to Cabrillo Point and gazed out at the broad, endless sea. That night would also be my first night to sleep in a motel. How was I to know that Labor Day Weekend was such a celebrated holiday? There were no vacancies anywhere. I phoned motel after motel from the yellow pages and drove over 50 miles in all directions trying to find a room. Finally, checking my map, I saw Torrey Pines State Beach. With my camping gear, I was more than happy to sleep on the beach and hear the ocean. It was late at night by the time I reached the beach. A sign clearly indicated that overnight stays were not allowed, but at this late hour I expected that no one would be checking. I found a shelf in a cliff where I could lay my sleeping bag. So I snuggled in and finally relaxed to the soothing sound of ocean surf. It was another fitful night. I dreamed of the waves reaching up the beach and pulling my sleeping bag with me in it out to sea. I woke at first light, startled. Peering left down the beach I saw a ranger walking away from my perch. I panicked, gathered my sleeping bag, and hurried back to my Beetle. Barricades had been placed in front and behind my car to imprison it. I jumped in, turned the wheels sharply (relying on its small turning radius), escaped the corral without even touching the barriers, and sped away before park rangers or police could pursue. I drove directly to the San Diego Zoo and arrived hours before it opened. In the parking lot were a number of RVs and campers, fellow travelers who had also not found legitimate places to spend the night.

In the following five years I undertook various road trips around the U.S. in this gem of a car with its cozy, intimate interior space. Eventually, I traded in my little baby blue bug…for a red and white VW bus. That’s another story.