When I was a little kid, my family moved to a small, New England town. As we drove, the elephants I smelled on the wind turned out be cows in a soggy pasture. We had just moved from a big city to the land of the Macintosh apple and the Guernsey cow.

...sometimes there would be fresh snow, sparkling white on the granite steps.

Clearly, our new world was new, so my parents brought us to church to nurture our embryonic social life. True, it was paradoxical that my parents were socialists and had been part of the Communist Party in the 1930s, but they knew the value of community, so off we went to church.

The town was old, incorporated in 1756. The church, nearly as old as the town, stood tall thru its two centuries. It boasted  peg-and beam construction, broad-sawed timbers and hand-hewn stairways, all still exposed inside the cob-webbed attic. A pitched slate and copper roof bifurcated along a ridge rafter while eaves sheltered white clapboard siding and stained-glassed windows. The whole vessel held court, dignified and perpetual, on a sea of mammoth granite blocks, quarried nearby. 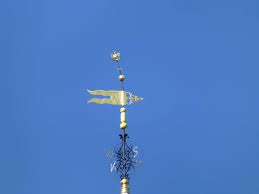 True to New England tradition, our church boasted a tall but unadorned steeple that rose skyward to a gold-painted wind vane, a stiff pennant that squeaked whenever the wind changed direction. My old man thought the squeaking pennant looked like a gold-plated pair of long johns hung out to dry. He was right. It did.

My old man taught astronomy and physics in Sunday school. Nobody in the church stopped him because he spoke truth when he intimated that science might hold more wonder and meaning than religion. Besides, we had joined a Unitarian congregation, a gathering place guided only by a free and responsible search for truth and meaning.

The truth and meaning thing pretty much clinched it for us because science and this church — we didn’t call it religion — were both doing the right thing. Besides, my mom liked to sing in the church choir — she had a very pretty voice — where she carried on a formal and nearly unnoticeable flirtation — she was very pretty — with the local doctor. It all worked out okay.

The church minister liked my old man, even though he taught science in Sunday school and nodded off during every Sunday sermon. The poor guy was in better shape at the end of a work week when we stayed home and he made crepes and orange sauce and powdered sugar and we all joked around together.

Talk about tradition. Here we were, attending a picture-postcard ceremony in a venerable New England church. I sang in the choir, songs whose verses I could never remember. Later I realized why. The words were meaningless. Stuff about shepherds and multitudes upon high, and grateful flocks. Who can remember that crap? They all sounded like jesus was supposed to look, with his golden locks and wispy beard.

The picture-postcard syndrome thickened at Christmas. We did a candlelight service on Christmas eve, and sometimes there would be fresh snow, sparkling white on the granite steps. We took off our snow clothes and donned white surplices and sat on a dais below the stained-glass windows. On the columns between the stained-glass windows, candles flickered warmth above fresh boughs of fir. 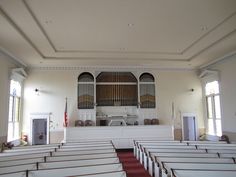 Inside, this was no gaudy trump of a church. We’re talking New England austere but elegant — all white woodwork, the stage below the pulpit white, the pews white with their dully polished cherry wood railings.

The minister, that’s how they address the god guys in Unitarian, gently inherited the pulpit from an old Brahmin, a member of Boston’s ruling-class families whose responsibility it was to guide and perpetuate the worldviews and the values of their forefathers. And yes, I use “forefathers” advisedly. There were no books written about women participating in the American Revolution. None.

The new minister reflected a new take on his predecessor’s responsibilities. The Cold War might have blown outside the frosted stained glass panes, and Reverend Tilson had no Brahmin pedigree but, as he settled nicely into his new congregation, he slyly revealed an earthy sense of American humor, maybe a little like Garrison Keillor’s.

The wheezy pipe organ had just been restored to its former magnificence and the choir always found pretty music to sing, Bach and some of the other old guys. This before folk music found its way into liberal churches. My mother was up there singing hymns, she looked so serious and passionate when she sang. Not pious, not religious, just intent.

The glow inside the lofty church nave became magic over Christmas. I was young enough to still be able to say “Wow! I can’t believe my eyes. It’s finally Christmas eve…” It was one of those moments that you thought, “I’ll never forget this as long as I live.”

Plenty of those moments disappear with time, but others remain. This scene was a keeper, with the candlelight filling the old structure, the bellowing organ, all the little candles perched on the dark green boughs and cone clusters waving in the draughts from the leaky old windows. A tinder box tragedy in the making but these Unitarian folk were wood folk, they knew their pines and firs and cows and apples.

The Unitarian faith, ensconced in the heart of American’s transcendentalism, expressed the pre-bohemian faith of the Emersons, Thoreaus, Whitmans spoke from generations of Cabots and Lodges and Lowells and Adams and the Coffin family’s whale-oiled wealth. Tradition lay everywhere in that church, from its mighty hewn beams to its yearly candlelight service. Despite my later rush toward anarchy, I loved that church and its people.

It’s difficult to know, in the midst of today’s unprecedented upheaval, how to relate to such a deep, stable history. Every thing is up for grabs now, again, for the third time in my life. That church stands strong, I am sure, but right now, all that it stood for feels frozen, like a roadside nativity scene that skates by in your peripheral vision and disappears in the rear-view mirror.

This Little Light of Mine
by Suzy