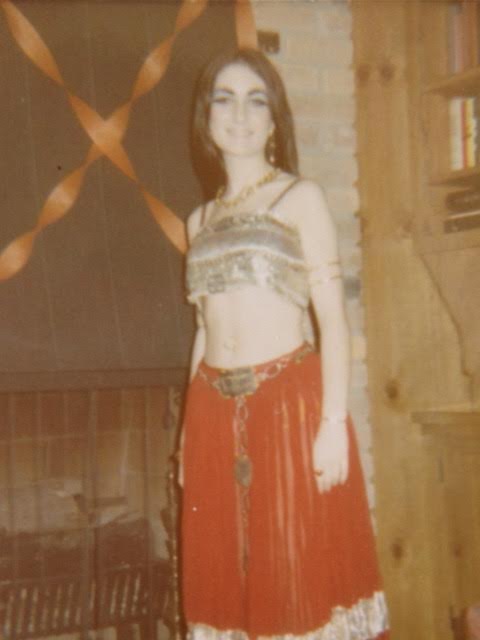 Growing up in a neighborhood in Detroit full of kids, Halloween was a big deal. My dad would carve the pumpkin in the scrub sink in the basement. We also lived a few blocks from two large cemeteries, so it really was spooky. We ran in packs from house to house, holding our breath. Houses were decorated to the max. We collected money for UNICEF, sorted our candy and brought what we didn’t want to eat to school the next day, to be given away to hospitals.

Detroit was somewhat notorious for unlawful doings on the night before Halloween called Devil’s Night. Unruly miscreants would come by and throw eggs, toilet paper or worse on your property. So we tried to behave and not incur anyone’s wrath throughout the year.

An aunt brought me a kimono from a visit to Japan when I was 8 or 9 and that was my favorite costume for years. I even wore it in an Intermediate camp production of Mikado when I was 12 and it was my cover-up for years of modeling for life-drawing classes. I still have it.

The feature photo was taken my senior year in high school at a choir Halloween party that I hosted at my house. The costume was one of my mother’s dance costumes from her days as a dancer. She danced a “nautch” dance in it when she was 12. I’m 16 in that photo and went on to wear it on other Halloweens throughout the years. I still have the costume, though it is now about 90 years old and very fragile.

The children are grown and gone from my neighborhood now. Last year we had one trick-or-treater. Even the Boston College students can’t be bothered to come around. I haven’t carved a pumpkin in years, don’t even bother to buy little ones for my stoop anymore. The joy seems to have gone out of it all.

8 Responses to Costumes to Keep