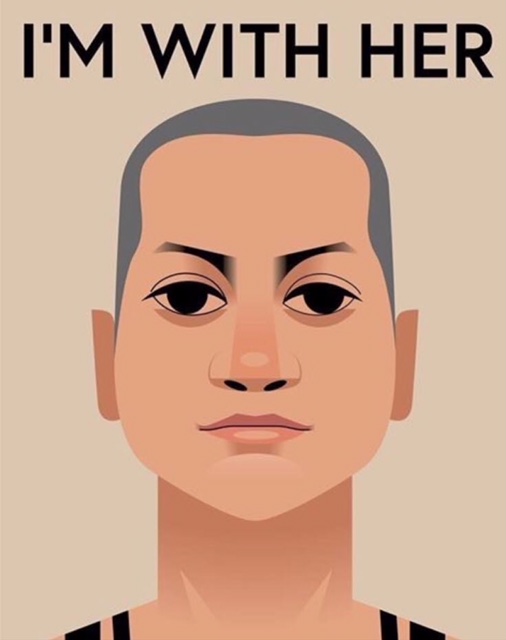 I’ve been thinking a lot about Emma González and the circumstances that plunged her into the bright, white spotlight reserved for America’s budding leaders, shooting stars, and civic heroes. I applaud her valor and admire her authenticity, but I mourn for the childhood she forfeited—the self-consumed teenage years snatched from her by shameful gun laws and a mentally-ill boy with access to a bullet-spraying machine.

Never underestimate the fortitude of a passionate, teenage survivor carrying the weight of her brothers and sisters on her narrow shoulders.

When I was Emma’s age I stayed busy writing bad poetry and playing the piano. My most valued possessions included a mini-skirt, a maxi-coat, and a perfect black turtleneck (remember the dickie?). My hair was shiny and long. I obsessed over shoes. I poured baby oil and iodine on my alabaster skin and baked myself, summer after summer, in an attempt to look like the mahogany Coppertone girl, the one with the puppy yanking down her swimsuit. I wrote ooh baby, baby song lyrics about sunsets and a boy named Mark. I was deadly serious about my hobbies and passions and truly believed—like most teenagers—that the world’s eyes were judging me.

Emma González no longer has time to fret about tan lines, wardrobe issues, or the way the sun bounces on the horizon. Maybe she never did. On the day of the Margory Stoneman Douglas shooting, Emma was in the auditorium with dozens of other students when the fire alarm sounded. For two hours, she hid in the auditorium with classmates and friends—until police told students to vacate the building. Emma—faster than you can shout “we call BS“—became an American activist and advocate for gun control, co-founding the advocacy group #NeverAgainMSD.

What happened to her childhood? Poof. Gone with the rhythmic, deadly clatter of a weapon designed for a killing field.

It’s a myth that all kids love high school and enjoy an easy-breezy few years cheering for football teams, trying to get high, and attending proms.  In my early years of high school, I got bullied by the kind of mean girls who populate every generation: hard-edged, resting-bitch-faced, hormone-imbalanced strutters who stomp around the high school cafeteria like a Clearasil mafia. A gang of angry girls once dragged me down the steps by my hair because I lived in the wrong neighborhood. At least they weren’t packing heat. I’m sure, with access to a semi-automatic weapon, one of them might have considered shooting me—they hated me that much. Teenagers torture themselves in different ways. Part of me thought I deserved their disdain.

Whenever the shrill, adolescent voice of insecurity yelled my name, I took refuge at the piano. Composing a new piece of music and figuring out how to play it made me feel in control, confident, and capable. Not capable enough to stare down the NRA, like Emma, but skilled enough to brush off the strutters and regain a sense of purpose.

Emma is a creative writer. She also finds joy in astronomy. Before the shooting, her head might have been in the stars, but—because of her education—she knew how to confront a blank page, take the teen tornado blustering through her brain, and create an orderly, emotionally relevant statement. Catapulted to grief counselor and motivational speaker for a nation of despairing and determined young people, Emma used her writing skills to pull through the tragedy.

Emma is a hero. So are her teachers and parents for giving her the lessons, tools, and artistic freedom to cope.

The shooter had an AR-15, but, in the aftermath of killing, Emma showed up armed with her own artistic arsenal, one that has allowed her to challenge the previous generation’s apathy, the NRA, and the politicians bought and sold by the gun lobby. The MSD High School teenagers astound me. Facing a future smeared by horrific images blistered onto their developing brains, they refuse to give up, give in, or tolerate the sickening chaos that has become the new norm in our government. They have chosen their issue—reasonable limitations on the availability of semi-automatic death weapons to children. They’re facing the need for change by running toward the issue, head on. Run, kids, run.

It’s a different kind of race when unexpected hurdles include bleeding bodies of friends.

I guess the prom will have to wait.

Teenagers like Emma—or your kids or mine—are generally known for rumpled bedrooms, disheveled backpacks, and illogical thinking. In a classic Opposite World scenario, our kids now make more sense than many adults. Our youth are not just marching and taking selfies; they’re collecting names and voting records of politicians controlled by the NRA, mobilizing young people to make a difference at the polls in November, and presenting calm, clearheaded arguments for gun control in high-pressure public forums and at nationally-televised press conferences. Virtuosic grace under pressure. Grief meets bravery meets action.

According to another activist—Congressman John Lewis—the MSD kids are making “good trouble.” 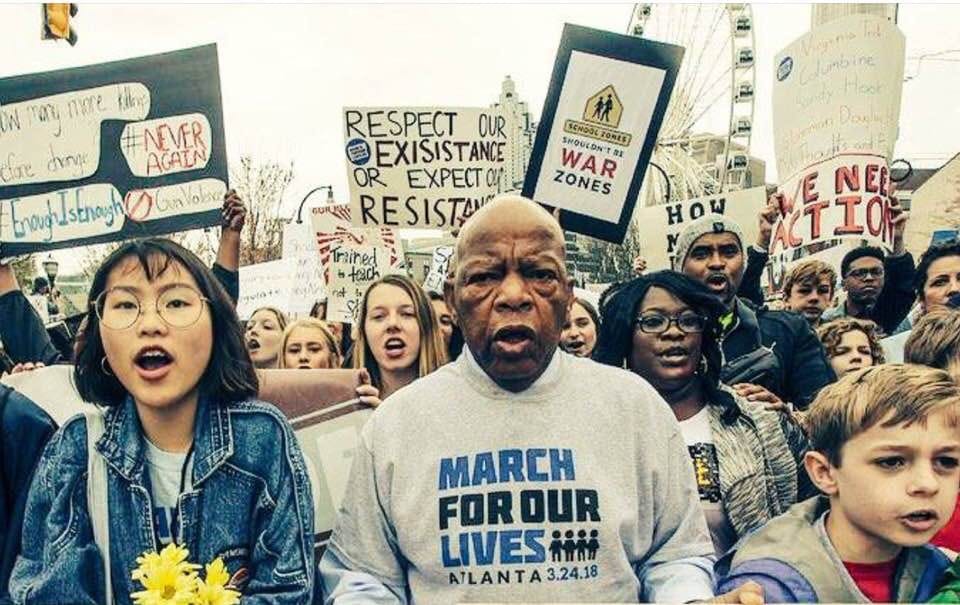 Chaos rules the capitol, whereas ordered, logical thinking guides the actions of MSD High School students—the ones who are still alive. Never underestimate the fortitude of a passionate, teenage survivor carrying the weight of her brothers and sisters on her narrow shoulders.

Some thoughts about chaos and order: A pianist almost always begins with chaos. Before tackling a sonata, fugue, or showstopper from the Great American Songbook, before playing a bebop melody or creating a new-age cushion of sonic comfort, a pianist faces a mess of notes either on the page or in her head—some call them fly shit. The notes swim before her eyes and tease her ears, daring her to embrace mayhem and create beauty.

In an artist’s world, it’s critical to balance the mind’s creative bedlam with logical, systematic, strategic thinking. When starting a project, a composer, painter, poet, or journalist must tango with the disarray of her own imagination. Her over-taxed brain hosts flights of fancy and darkest desolation, joy and hysteria and anguish and confusion. Before she spills her emotional guts onto the blank screen, canvas, or music manuscript paper, she must calm her tormentors, restore order to her subconscious desires, and beat back the distractions and necessary interruptions of real life.

Emma González, at the age of eighteen, has the artist’s required skill set.

Is it too much to ask the same of our government?

The paucity of stability and civility in the United States—brought on by the muddled rants and hateful bombasts of our current president—distresses me. Regardless of political affiliation, most people agree that kindness and respect make progress possible. To move forward, encourage positive change, and save the planet for our children and grandchildren—we must value the kind of creative chaos that is followed by ordered, rational thinking.

Emma has that together. She might be our Malala, rising above ruins and illuminating the path. 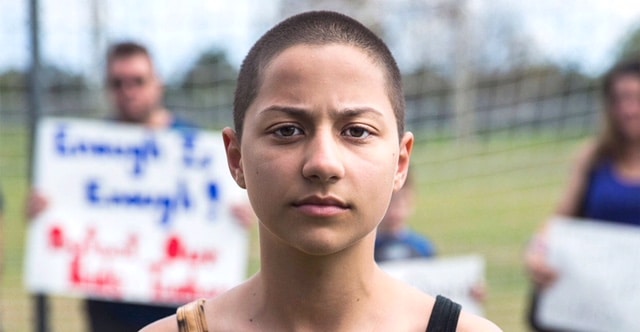 I encourage the men and women running our country to take the chaos and necessary distractions cluttering their minds, study a page from the Emma playbook, organize their thoughts, and listen to themselves and each other.

Right now, the government has a chance to heed the words and actions of the #NeverAgainMSD movement founded by Emma and her team of fellow students. Our congress has the opportunity to get one thing right: Stop selling weapons of mass destruction to teens.

I am behind you, Emma González. I wish my generation had been out in front of the gun issue so you could have savored a few more years of poetry, love beads, and hours spent gazing at the darkening sky. But now that you’ve been shoved centerstage, I encourage you to follow the artist’s way. Keep your head in the stars, but make sure you find your way back home to deliver your message. Six minutes of silence? We hear you. We need you. You are who we want to be when we grow up.

New piano album: Home and Away, Goldsby’s latest solo piano album, directly from the artist, at Amazon, or from your favorite streaming channels.

Sign up here to receive Robin’s free newsletter. A new essay every month!