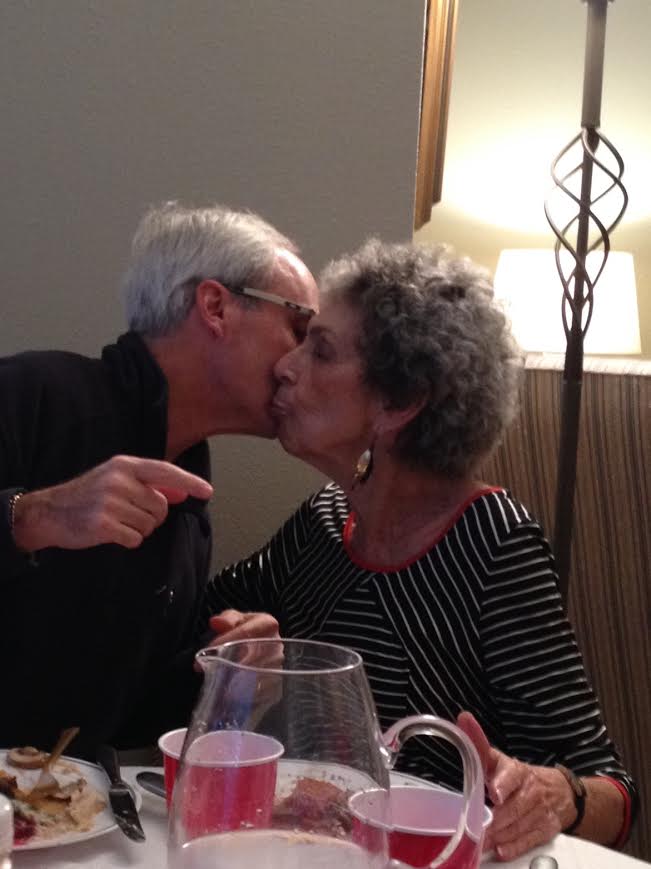 It is that time of the year when we take stock of our blessings and enumerate what we are grateful for. It feels trite and yet appropriate to feel gratitude that my children are well and have good values; that I feel love and respect from my family and friends, that I have health and physical comfort.

At the time of my mother’s death, a close friend reminded me that my mother taught me to love the arts and without that, my friend and I would not have met. The arts mean a great deal to me. I sing in a community chorus. We are currently rehearsing the Brahms German Requiem, a seminal piece of choral music. Just rehearsing it last Monday brought me great comfort and joy, for the first time in almost a week. That is meaningful. I volunteered at a large art sale which benefits the School at the Museum of Fine Art this past week. I got to look at lots of good art. While I cannot make art, I appreciate looking at it. I was a theater major in college. All the arts challenge and excite me and I am grateful to be knowledgeable about a wide range of artistic pursuits, and open to continuos learning.

In thinking about particularly memorable Thanksgiving celebrations, three come to mind that I will now share.

My father filed for divorce from my mother in early 1980. Though their marriage had been broken for years, she was in shock and fought the offered settlement for a difficult year. It was futile, as the ruling came down exactly the same a year later, so the only people who benefitted were the lawyers, but she was stubborn. My father had been sleeping in a different bedroom for years and was advised by his lawyer that he didn’t need to vacate the house, so they were still under the same roof. They planned Thanksgiving together. I knew it would be our last as a family and decided I wanted to go to Detroit to be with them. We had been with Dan’s parents the year before anyway, so it was my family’s turn. BIG mistake. My father always did all the cooking for holiday meals and he took on the chores this year as well, doing the turkey and all the trimmings. He made his luscious sweet potato with marshmallow souffle. But Dan liked yams, dripping in carmelized brown sugar and butter, the way his mother made it, so nothing was right by him. The dining room table was set with the little pilgrim candles, the same ones I will use this week. The table looked nice, the food was good. Not a word was uttered. We ate in stony silence. We wolfed down our meal in about 15 minutes. It was the most uncomfortable meal one can imagine. I don’t even remember if my brother was there, though I imagine he was. Dan and I got out of there SO fast. We went over to my cousin Connie’s, a favorite, and surrogate mother, who lived close. Her father was my dad’s oldest brother. They were all assembled with their three sons, two dogs and lots of boisterous noise, not the deathly silence we left behind at my house. We enjoyed the rest of the evening with appreciative relatives.

Two years later we had moved out of our first Back Bay apartment and were in a holding pattern, waiting for the next, larger, ground-floor unit, further up Beacon St. to be finished. We rented a friend’s godmother’s 5th floor walk-up. We came from a 5th floor walk-up, so we were accustomed to the stairs. This one was not air-conditioned and the owner left some of her furnishings behind, so much of our belongings were in storage. Though the condo had a second bedroom, we used it primarily for storage. The kitchen had the barest of utilities in the corner of the open living room; almost no counter space, a moveable butcher block for some cutting and storage and a dining room table, folded against the wall; bare existence. It worked for us, as our new condo was being built a block away. Dan’s grandmother was still living in nearby Brookline. His parents were in New Orleans at this point. I got a call that they wanted to come in for Thanksgiving and I would be hosting. I had to do all the shopping, though Gladys, Dan’s mother would cook, once they got in. Dan’s brother Gerry and my mother also came in. We crammed my mother into the second bedroom. The Pfaus all stayed with Nana in Brookline. I received a letter with the entire grocery list…three pages long. The final line: DON’T PANIC! I still have it. It became the basis for all future Thanksgiving meals and recipes for how to make all of Gladie’s traditional foods got added to my binder. I carried everything, even the 20 pound turkey up the five flights of steps (a kindly neighbor in the building helped me when he saw me on the landing). Dan’s grandmother, using a cane, even made it up the five flights of stairs. We pulled it off, had a lot fun doing it and it stands as a turning point. There would be many more Thanksgivings at my in-laws, but this was the first time we hosted, the son had become the head of the household. 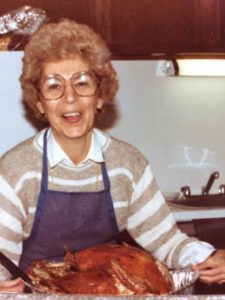 The final Thanksgiving took place three years ago in Overland Park, KS. My mother-in-law was battling cancer. She had moved into a small two bedroom apartment from the four bedroom house she had shared with one of Dan’s sisters and her two children. She had been undergoing chemo the previous year and we had all come in for that Thanksgiving too. This year she was on a different regime, was considered in remission, but we all wanted to be there, so our kids came in from both coasts, and we were all together. Two of Dan’s sisters lived in the same complex and did much of the cooking. We gathered around the small table, sitting on stools, bridge chairs, whatever worked. We saw his brother the day before. He was with his wife’s family. The featured photo is Dan kissing his mother. It is the final photo I have of the two of them together. We went around the table, saying what we were grateful for, enjoyed our meal together, enjoyed being together. The next time we were together was the following August, a few hours before Gladie died. She was cogent when we arrived and each had our time alone to say goodbye. She told me that I was never just her daughter-in-law, but I was always her fourth daughter. I had known her since I was 20 years old. She was always very good to me. I am grateful she was in my life.

Giving Credit Where Credit Is Due
by Arthur Breur, Composer