Written in response to 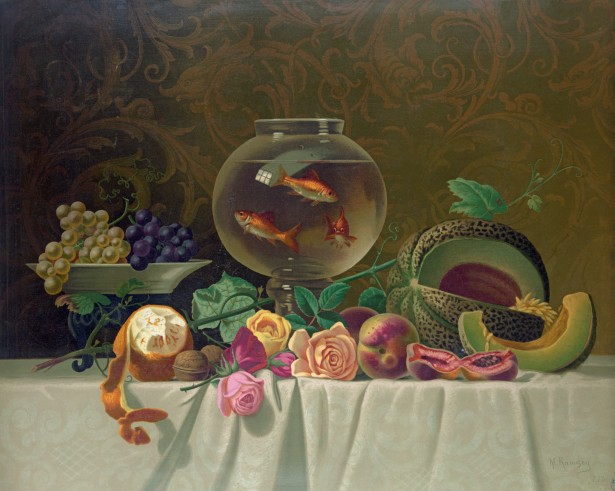 My excuse is that I was five or six years old.

My excuse is that I was five or six years old.

My memory is that we had goldfish for a long time, although after reading about the short shelf-lfe of an (admittedly) small sample here on Retrospect, probably not the same ones. I remember the tank-cleaning ritual vividly, because it was my first experience with death, or at least the threat of it. Each time we scooped the fish out of the bowl, and they squirmed and flopped and sometimes escaped the net, I was convinced they were going to die. I don’t ever remember that happening.

Instead, I was the unwitting agent of their demise. I used to wake up very early in the morning before anyone else and pass some time watching the fish swimming around aimlessly. I felt sorry for them, decided they were bored, and lobbied for enriching their environment. (See, a tendency for home decorating is innate.) We acquired some seaweed (very pretty, and they could nibble it), a treasure chest, and a bridge that they could swim under. Much better.

One morning they seemed to be poking at the top of the bowl more than usual. I recognized this behavior from when we’d sprinkle the food into the bowl and they’d swim up to get it. I decided they were hungry. I couldn’t find their food, so I got what seemed like the next best thing–a piece of bread. I floated an entire slice (of probably Wonder Bread) on the surface of the water. I watched them nibble it for a while, then got sleepy and went back to bed.

When I got up I could sense something was going on but no one was saying what. My mother asked me if I’d done anything to the fish. “Yes,” I proudly told her. “They were hungry so I fed them.” Thankfully I never saw the bowl, It was whisked away and flushed at first sight. I can only imagine what it looked liked like with several dead fish and a disintegrated piece of bread clouding the water. I was told they had eaten themselves to death, but thinking about it now, I’m sure they suffocated first.

It wasn’t long after that we got a dog. She lived a long life and died a natural death, despite enduring indignities like rolling up her ears with rubber curlers.