Prompted By In the Band
13 comments. 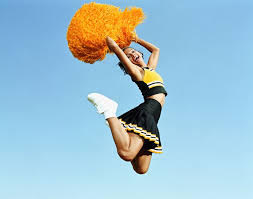 Sometimes the prize you seek is not the prize at all.

I wanted to do something outside of academics freshman year, something physical. My options were limited. Too short for basketball, not drawn to softball, and with no soccer offered, I took the default path to cheerleading. Never mind that I had no clue about what to do and when during a game. First in ten—then what? I reasoned I could always take cues from the other girls.

At that time “making it” onto the squad meant a lot. I set my sights on doing just that that spring. I lunged, yelled and practiced cartwheels on our front lawn in the weeks leading up to spring tryouts. It would all have been for nought, however, had I not been able to do The Jump. The Jump was a feat of flexibility. It required running and then leaping into the air with back arched, head and arms flung back, knees bent and toes hitting the back of the head in a near-perfect “O”. Mirabile dictu, as the Romans might say, it was a difficult move and I could do it.

That fall I loved it all: the games, the crowds, the crisp-apple fall days, the thumpa thumpa of the band. Strange, then, that my memories of that heady year are blurry— except for one.

Football had ended, hockey season was about to begin. Our school rented rink time from a nearby university. Players and cheerleaders had to be aboard the bus to the city by 5:00 a.m. sharp. I lived across town. How was I going to get there in time, and what would happen if I didn’t? I needed a ride.

All eyes in my family turned to my father. My snotty, self-centered little self was horrified. Dad? Are you kidding me? He was the biggest night owl sleeper-in’er of us all. Had he ever even seen five in the morning?

Dad nodded his head yes, he would do it. I was doomed.

Charlie Bennet, he’s our man, if he can’t do it, no one can!

At 4:00 a.m. the New England winter sky is as black as a hockey puck, let me tell you. I had laid out my uniform the night before and had fallen into a troubled sleep. At four my alarm blasted me out of bed. I dressed in the darkness and crept downstairs. There was a clink! of spoon against china as I turned the corner. I stood, stunned, and stared..

Backlit in the kitchen was Dad, his hand shakily pouring a cup of coffee and a lit cigarette burning nearby. I took it all in, the fatigue in his face, his stooped posture. He was a fifty-four-year-old man in declining health, dressed in the sport coat he had been wearing the night before at dinner.

I realized with shock that my weary father had stayed up all night to be awake for me, to make sure he did not fall asleep and disappoint me.

There would be time enough later for shame and for guilt. Right then there were only Dad, myself and a warm melt of love such as I had never felt before.

I bet you thought this was going to be a story about cheerleading. Not entirely. I’ve brought you all the way here just to tell you, I have remembered this moment all of my life.

A short history of cheerleading:

You may know that the first cheerleaders in America were college men. Cheerleading was imported from Great Britain in the late 1800s and practiced first at Princeton. Cheering had its own cachet.

A 1911 article in The Nation magazine asserted: “The reputation of having been a valiant cheerleader is one of the most valuable things a boy can take away from college. It ranks hardly second to that of having been a quarterback.”

My Boyfriend’s in the Band
by Constance