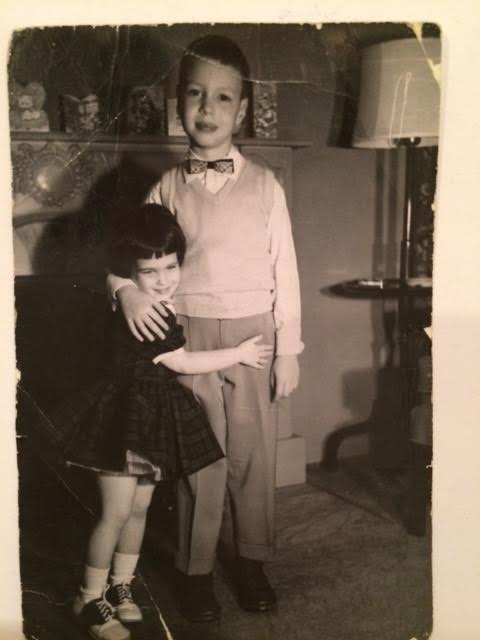 Rick was alone with our mother for almost 5 years. I was not welcome when I came along. I was a hairless creature. He thought girls should have hair, so I must be a boy, right? He called me boop-de-boy and tripped me as I learned to walk. But as I became more fun to play with, and a little less of a threat, he was kinder, in a way. The featured image is on my 3rd birthday. I looked up to my brother in every way and wanted to tag along on everything he did. I was a pest. We had a window seat in the den of our little house in Detroit, which we both liked to play on. I used it as theater for my dolls, he used it as a desk for drawing cartoons. When I was just a little girl of 3, he pushed me out of the way, so he could draw. I was furious, tried unsuccessfully to push back against his much larger 8 year old self, so I walked around behind and bit him where I could reach…in the behind! I had a temper.

But we had more and more in common as we grew older. We both love to sing and are very musical. I am a good singer, he has perfect pitch. We would stage musicals with the whole neighborhood in our backyard. We played games until the streetlights came on, running around on summer nights, the streets full of friends. I ached for him when he went away to overnight camp. He preceded me at the National Music Camp in Interlochen, Michigan. His elementary school music teacher had recommended it. I loved to go visit and couldn’t wait until I could also attend, which I did, finally, in 1964. He was in High School Division by then, I only a lowly Junior and he didn’t want to be bothered by me, until I wound up in the infirmary with the flu (I threw up during Sunday morning services; I was infamous – the kid who threw up during The Lord’s Prayer). I missed seeing him in a leading role in the Gilbert & Sullivan operetta. He finally came to visit me.

We moved to a near suburb of Detroit in 1963 and we were both miserable; smart, gawky misfits. He was half-way through high school, I was entering 6th grade which was the oldest grade in the elementary school. I had skipped part of 5th grade due to a complicated system in Detroit, so I was also the youngest in my class. He tried to fit in, I had almost no friends and the gulf between us at that age was huge. Our mother had a nervous break-down and took to her bed. An aunt came in to care for us. Rick did the best he could and in two years, he left for Brandeis. Our father hand-picked that school for him. I think back on the decision with some amazement. Brandeis (like my brother), was 18 years old at the time. Founded by Abram Sacher of St. Louis in the ashes of WWII, Abe had gone to Washington University with my dad’s oldest sister and knew the Sarason family well. Few people in the mid-West had heard of Brandeis in those days. It was a bold and successful choice.

Now I was alone with our increasingly fragile mother. I eagerly waited for Rick to return on vacation and we would sit up half the night to talk about her and us and “why us”, and how to survive her (we both have survived her, by the way). I decided I didn’t want to follow in my brother’s footsteps and almost didn’t apply to Brandeis. A parent at our temple talked me out of that. I didn’t get into Yale (only the second year they took women and my board scores were average) and I decided against Northwestern when I learned that the Greek system was a strong component of life on campus. I’d had enough of cliques already. So follow Rick to Brandeis I did, though he was already a year out by the time I got there.

Rick and I look nothing alike. He is tall and thin, I am tiny. We both are near-sighted, but I got contact lenses at 13, had to give them up when my eyes dried out more than 20 years ago. He started wearing them fairly late in life. Our coloring is entirely different. No one would take us as brother and sister. He majored in Economics at Brandeis, I, in Theatre Arts. He was Phi Beta Kappa. I was not. We both were magna cum lauda with honors; he was so highly recommended that he received an honor from the Economics Honors Society and a Woodrow Wilson Fellowship. But he had spent the semester, right after the 1967 war, studying in Israel. He sent home incredible letters. He decided he wanted to be a rabbi, so turned down the fellowship and continued his studies at Hebrew Union College in Cincinnati. He went off to Israel for two years of study (the second year was spent at Hebrew University). Having not seen him in two years, I visited during the summer of 1972. I stayed in his (all male) dorm, which was rather hair-raising. No one believed we were related. Most students were gone by that time so I had my own room, but Rick had to guard the door when I used the shower or facilities and I think there is one guy who will never be the same, as he walked in on me while I shaved my legs in the sink!

Two years later, Rick was ordained and I was married. Rick continued his studies at Brown University where he received a PhD in Rabbinics. He taught there for a year, then went back to HUC in Cincinnati, where he has taught ever since. He met a wonderful woman there and they were married on his 35th birthday. They have two terrific sons. Rick is a mensch and a respected member of his community.

I worked for 11 years, also have two sons, retired when I was pregnant with the second and have done various types of volunteer work since, mostly in the arts. We don’t get to see each other nearly as often as we like, but we consider ourselves very close. 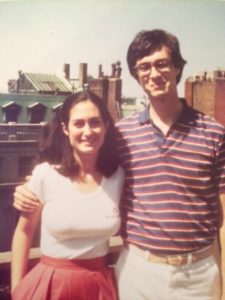 4 Responses to He Called Me “Boop-de-Boy”

Such Devoted Sisters
by Suzy