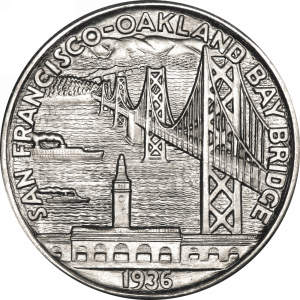 ...this day would prove full of little revelations about Dad.

My Dad was the quiet type – he rarely expressed his feelings or shared his past. However, one day we spent touring San Francisco, long after he had moved to the suburbs was quite revealing.

The tour commenced with the standard scenes: the Golden Gate, its cables swimming in wet clouds, Coit Tower in windy sun just a few hills away, and Fisherman’s Wharf, bustling at lunchtime.

Passing through North Beach, Dad remembered wearing his first tuxedo to a party at Bimbo’s 365 Club, though he couldn’t remember the precise occasion.  “I have a picture of it at home,” he said.  I knew it; the one from the late 1940’s, with the gals all dolled up, the guys with their arms around them at a big table.  Mom always thought it was funny that Dad couldn’t remember his girlfriend’s name.

When we drove by the Church of St.Peter and St. Paul in North Beach, he remembered visiting his grandparents at their apartment next door.  He was young and obviously impressed.  Dad reminded me that his grandfather was a ship’s captain; there was a persistent tale that had something to do with great grandpa firing a cannon off Fort Point in protest when he was refused safe harbor during the Spanish-American War.

Dad brought binoculars to lunch at the old Pier 23 Cafe.  We read the names on the big ships coming in and speculated about what cargo they might carry. The gulls stalling in mid air, the empty windows and walls of Alcatraz, the pretty girls hurrying back to their offices, everything was as it should be.

It was on the way out of the city that Dad began to navigate – I realized he was going to take us “the long way home.”  He wanted to go through China Basin over Lefty O’Doul Bridge.  I reminded him about the funny sound tires made on the metal, and how we would always make him cross it on our Sunday drive.  The great bridges of the city meant something to my Dad – he told us about walking on them when they opened. It was as if the Bay Bridge and Golden Gate defined our family’s passage from this island-like city, and beholding it from across the water was usually an act of celebration or awe or wistfulness.

Driving south on Third Street, Dad pointed out the salvage yards. “Turn left up here,” he said, certain of his directions.  We pulled up to the bay’s edge and marveled at the dry-docks and he said, “They did sonar work on my ship there at the end of the war — it only took one day.”

After World War II, Dad went to work for the American Can Company.  So today I took a picture of him standing below his drafting room in the old Canco building on Alabama Street, now artists’ studios.  He proudly told the girl that leaned out of a window, “I worked here for thirty-four years!”  He designed the machines that made the first pull-tabs and pop-tops.  I remembered visiting his office a couple of times as a kid.  The desk lights, the drafting tables, the blueprints were all in precise order and the draftsmen wore white shirts and ties.  It was quiet and official, but I remember the guys were friendly and funny, wanting us to feel comfortable, letting me know how they liked my Dad.

Suddenly he pulled a photo from his vest pocket showing him and his best pal home after the war, looking sharp in their “civvies,” leaning against a Buick near 19th Avenue.  His pal Joe was a rookie cop out of the Taraval station, and “sometimes your Mother and I would meet him while he walked his beat,” he said.

Later, we stopped at Grandpa’s old house -his childhood home- and saw the old garage still standing among the wildflowers in the side lot. Dad described how his father would roll the Model T out the back and down towards the train tracks to start it up.

He showed us where he would slide down the hill on cardboard sheets by the Southern Pacific tunnel.  The grass was thick and wet, the steep slope dropping in front of the black portal where the commuter trains still rolled through.  “Grandpa was a boxcar builder for awhile,” Dad said.  “During the summer I’d sweep out the cars in the big rail yard off Geneva Avenue.”  Here was another new fact for me, as this day would prove full of little revelations about Dad.

As we drove, Dad recounted the patterns he followed through the Mission or Potrero Hill in terms of change and constancy.  He said, “I’ll be damned!” and laughed when he found an old friend’s house and said, “I’ll be damned,” in disgust when he saw they had changed the name of his junior high school.

I listened and watched him out of the corner of my eye, and when I looked closely that day, I saw the detail of the rusted hinges on Grandpa’s gate, and how fast the clouds’ shadows passed over Silver Avenue on a summer afternoon.  I heard the cool breeze whistle the telephone wires and smelled the asphalt soaking the sunshine.

My Dad and I had constructions of the city in our minds that worked like a reference tool and picture book.  Though he never talked about how he felt about things, he could draw clear, simple maps on how to do something or get somewhere.  I knew Dad’s drafting skills were the foundation for my artistic talents.  Maybe the relationships between the streetcar lines, off-ramps and parking garages of the city overlay the unspoken images in our hearts.  And that day I realized my love for him was woven into my love for this city.

My dad was a child of the Greatest Generation; I was born in the city in the Fifties.  So I didn’t really discover its details until I came up from the suburbs to see a show at the Fillmore or attend the theater.  Later came nights at the Palace Hotel and watching the Giants at the yard.  The city I pictured as a tourist was always new and exciting, and things that happened here were somehow significant in the world.

But my Dad could point to the window in the house on the hill in our birthplace, San Francisco, and tell us the story about the little girl who would wait for him every day to deliver the newspaper and how she would wave at him.  “I played it cool, though,” he said, always embellishing his story, “because I was a couple of years older than she was.”

6 Responses to How My Dad and I Shared a City