Prompted By Women We Admire
10 comments. 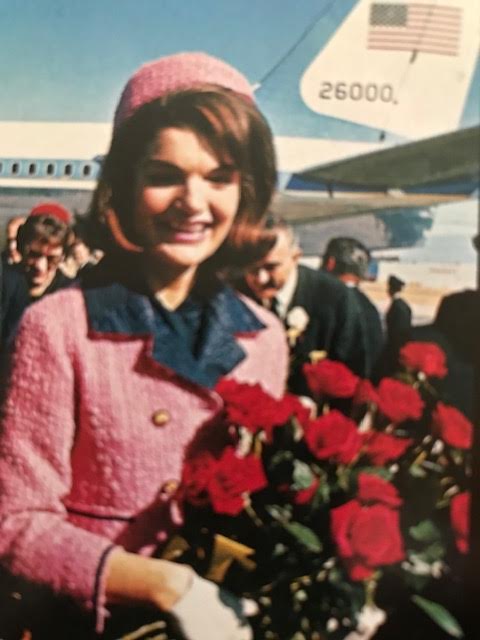 The epitome of grace, class, and intelligence, Jacqueline Bouvier Kennedy Onassis was, from the time I was very young, my idol. She married John F. Kennedy when I was a baby and she set about having babies too. She was married to JFK a mere 10 years and was pregnant five times, resulting in only 3 live births and two children who lived beyond a few days. Those children were her priority and, by all accounts, she did a marvelous job raising them.

As a person to whom culture and dignity have always mattered, Jackie exemplified those for me. She spoke French fluently and brought culture into the White House. She loved history and set about a historic restoration of our nation’s house, setting up a commission to find the period antiques that had once graced the rooms and went to Congress to pass a law to preserve the work she accomplished. In 1962, she led a nationally broadcast tour of the White House to show the country the work she had done. It was awarded a special Emmy Award, the only one ever awarded a First Lady. That award and the rose-colored suit she wore can be viewed at the Kennedy Library today.

She invited the great artists of the day to perform at the White House, making it a cultural hub. France even lent the “Mona Lisa” to the US. It has never been out on loan since. The national orchestra and ballerinas from my camp performed there in the summer of 1962. It was written up in the Life Magazine issue with Marilyn Monroe on the cover, as she died that week. Though naturally shy, she was a huge political asset to JFK, who asked her to come along on the campaign trail whenever she could, but with her high-risk pregnancies, this was not always possible. She was known to be cheerful and people, even before they were in the White House, were drawn to her. She helped JFK with his speeches, often adding historical references or context.

So she went with him to Dallas in November, 1963. How she retained her dignity and sanity after having her husband’s brains blown out in her lap I will never understand. She then led our nation through four days of mourning, keeping her head up and shoulders back, while caring for her own children. She will forever have my admiration for that; deciding to echo Lincoln’s funeral observances, looking up historical details. How she expressed her grief in private, she kept private; to the end of her life. Aside from the one interview with Theodore White in which she cemented the “Camelot” myth, she never again spoke to the press. She valued her privacy and dignity.

She remained close to her in-laws, while raising her own children as she wished. She leaned on Bobby for support and after he died, she felt she had to leave the US and find privacy and peace elsewhere. She did what she needed to do, always keeping her apartment on 5th Ave in New York City. She remained a New Yorker in her soul.

We caught glimpses of her jetting around the world, wearing couture. Who could blame her? She still was there for her children, always. When the Greek adventure ended, she stood up to Onassis’s heir and got the money that was her due. She bought a large spread on Martha’s Vineyard, at the far end of the island, but, by all accounts, was a good neighbor and would go to the local coffee shop to have a bite of food.

She went to work as an executive editor at a publishing house (then a different one, after the first published a work of fiction in which a figure closely resembling Ted Kennedy is shot) and worked for causes she believed in in New York City. She published some good books. I have the Gelsey Kirkland autobiography, a talented ballerina of the ’70s and ’80s who faltered with eating disorders and private demons. She rode to the hounds, she had a new beau. She enjoyed her children and eventually, her grandchildren, who called her “Grand Jackie”. She was always there for Teddy when he needed her.

Then, in early 1994, a press release said she was being treated for non-Hodgkins’ Lymphoma. The world waited; a photo of her on a park bench, rail thin, clearly wearing a wig, with Maurice Templesman emerged. Could she beat this set-back too? She died on May 19, 1994 at the age of 64, two years younger than I am now.

I didn’t know what to do with my grief. I went to the JFK Library, which she helped to build. She picked I M Pei as the architect, just as he designed the Arlington gravesite where she would be buried beside the president in a few days. I have been a member for close to three decades. I arrived early the day after her death and walked through the familiar exhibits. A memorial book was now open in the lobby when I emerged from the exhibits. I was the first to sign it. The press had arrived, taping people lined up to sign the book. I filled up with tears, wandered out into the sunshine of the parking lot. A local news person put a microphone in my face, asked for my reaction. I couldn’t speak. My grief was profound.

I never saw Jackie in person, though I have encountered each of her children at some point in my life and found them pleasant. But just knowing that I would never have the chance to run into her, perhaps on Martha’s Vineyard, or around the Boston area…well, a light has gone out of the world for me.