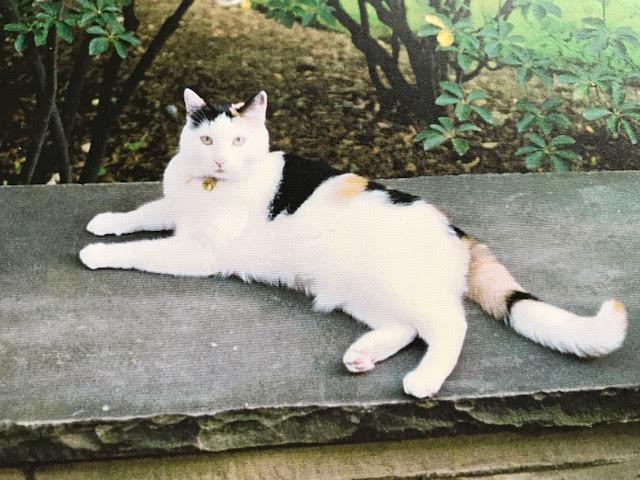 In 1987, the neighbor’s cat roamed around and got knocked up. They gave us the last of the litter, a sweet little female. David was two at the time and had a few children’s books about kittens; in each the protagonist was named Kate so bestowed the name on her. I’d had a dog growing up, so this was a new experience. She was friendly, interested in everything, was quite personable and loud. We had to shut her in the basement at night so we didn’t hear the crying and yowling. She and David fought over his toys. I asked the vet about that. “You have to understand, you have two at the same age developmentally”. Oh dear! At one point she got up on a kitchen chair and took a swipe at his head. I grabbed her by the scruff. “You are now an outside cat!”

She took to the outdoors. I called her in by shaking her treat box. I knew if I didn’t get her in by sunset, I wouldn’t get her that night and I’d hear her crying under our bedroom window at 5am. I once asked a close friend who is a world-reknown vet why she liked being out at night. Debbie answered, “That’s when the critters come out”.

I told her frequently that she was there for the amusement of my children. Jeffrey was the one who really loved her. He sat in his high chair as an infant and went rigid went she walked by. He squealed with delight at everything she did. His first word was, “kitty cat”. No “mom” for my kid. He just adored her. She allowed him to stroke or torment her. He cuddled with her. When he went to bed, she cried outside the closed door, so again, I had to move her away, as he was an incredibly light sleeper. Jeffrey told us that calicos could only be females, due to genetic markers. He knew everything about her and loved her with all his being.

She still spent much of the day outside, hunting. She was good at it, often bringing home trophies for Mom (me), including birds and chipmunks, dead or alive. After having left her in the care of my men, while away for a few days, I found a striped tail on the foyer rug (a fancy beige, Frank Loyd Wright-designed number). “What’s this”, I inquired, mystified and horrified. My husband conceded that Kate had eaten a chipmunk and regurgitated it once inside the house…on the lovely foyer rug. He had tried to clean up, but had left the tell-tale tail!

On a lovely autumn day, I left the door from the porch to the house open to let in fresh air. The outside door was always open so Kate could come and go, and still come onto the porch for shelter and howl at the inside door when she wished to gain entry; sometimes often, as if toying with me. This day, I got laundry out of the dryer in the basement when I heard a thud on the stairs above me. I rushed up and saw our pet had brought a LIVE chipmunk into the house as a special treat for me! Good lord, what would I do. I had planned to go pick up the suit I was to wear to David’s bar mitzvah, only a few weeks away. I knew I couldn’t leave these two creatures alone together. It would not end well. Mine is a large, basically one story house; a few steps down to the living room, a few steps up to some bedrooms, but no doors on most of the rooms, just large open spaces and all beige carpets. I did not want critter blood anywhere. Kate seemed quite pleased with her offering and made no attempt to do anything more. She left it up to me to figure things out. The chipmunk was stunned but not hurt. Once it regained its composure, it ran. I got my oven mitts and decided to try to pick it up and get it out of the house. For a moment, I had it cornered in a bathroom. I picked it up. It screamed (who knew chipmunks could scream) and so did I, dropping it in the process. I hadn’t thought to close the door and it ran out of the bathroom, into the living room, which is down two little steps. The fireplace has a black marble surround. Evidently, chipmunks can’t see that well. It took a flying leap at the black marble, hit it and slid back down. It tired that a few more times. I am screaming obscenities at it…things like, “I am trying to save your f***ing life, you stupid creature.” I also wondered where “America’s Funniest Home Video” was when you really needed them. I finally had the brilliant idea to herd it. I used the potholders to swat at it, first one way, then another, getting it to move in the direction I wanted until I had it out on the porch. Kate followed all this with a certain fascination…”I never knew what a goof my human was”. She had already divined was I was up to and awaited us on the porch. What happened after that, I cannot say. I shut the door and went off to run my errand, regaling my children with the story at school pick-up. I suspect the chipmunk took a flying leap out the door and made its escape.

Kate remained an increasingly fat, happy fixture in our lives for almost 17 years. David went off to Stanford, Jeffrey relied on her companionship. In February, 2004, I noticed she wasn’t well and took her to her vet, who felt a tumor and immediately sent me to our wonderful large, local animal hospital. She had lymphoma. They assured me she could have surgery and still be with us for as much as another year. Jeffrey was in a very bad place in his life. He had just started a special education school, 18 miles from our house, was in emotional shut-down. He needed his cat. We went ahead with the surgery. And a blood transfusion. At every step, the news was bad and expensive. Jeffrey was home with a bad cold when I got the next call from the hospital. They wanted to start chemo. From the next room, I heard the plaintive cry, “Don’t let her die, Mom”. We did all we could. We were told that she would never have proper bowel function and I set up plastic sheeting in her room in the basement. We brought her, battered and bedraggled, home the same day David came home for Spring Break from Stanford. She had been his cat originally and it seemed, waited for him. She passed away at home that night. Jeffrey wanted her ashes, which are still in the little urn in our basement.

He was desolate. “She was the only one in our house who was never angry with me. When I was sad or crying, I buried my face in her fur. What am I going to do?” My heart broke for my special child. We started looking for a new cat the next day, but none could ever replace the special bond Jeffrey had with Kate. 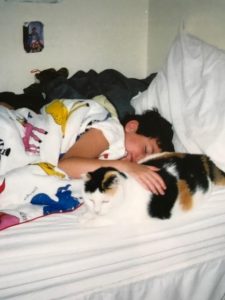 Jeffrey with his cat