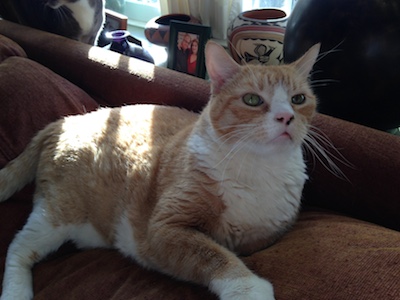 Ever confuse coincidence with causality? It can be fun. Somebody you meet on a demo in Madison, Wisconsin shows up at a concert weeks later in San Francisco. Wow! The ex-girlfriend of a city radical materializes unannounced on your rural commune. Both of you are amazed… too weird! People once directed me to the sleeping bag of a kid in Big Sur because they were convinced I was him. I wasn’t, but the kid sure did look like me. Strange!

Over time, the thrill of coincidence can diminish, diluted by the science of causality. The mystery of convergence can dissolve in the growing complexities of life. But this week, right here on Retrospect, I let myself be amazed once again by coincidence and convergence. I had to.

I haven’t been able to visit Retrospect for several weeks. My life had shifted into overdrive again. I’m not talking about murder or mayhem, just the demands of work, an upcoming university strike, projects gone awry, the usual, but — most significantly — since the middle of February we have been trying to save the life of one of our family members, Miles “Binky” Davis, a 25-pound orange tabby cat.

Even with the best of care, we could not pinpoint Miles’ malady or find a cure as his breathing became more labored. Always serene, he slowed but continued to love and be loved. He worked harder to breathe. An x-ray revealed a collapsed lung.

Our vets worked hard, testing tactics. Everybody loved Miles. They wanted him to live as much as we did but… WTF? We juggled faith and science. We extracted fluids, his lung inflated, he began to breathe easier. We put him on steroids and the vets interpreted lab reports. No virus, no cancers. We watched, tested, counted pulses. Daily, momentarily, we gingerly analyzed whether his godlike love of life continued to overcome his difficulties.

At home he rested in the comfort and splendor of his kingdom. Again, he began to fight for breath. We took Miles back to our collaborators, LA’s best animal emergency specialists but Miles gave us the sign… enough. Holding him on our laps, we said goodbye, watched his great spirit quietly disappear in the strife of the clinic’s emergency room. By that time, even the vet was crying.

We gave over this cornerstone of our household to a gentle group of doctors and technicians and floated home through rush-hour traffic.

That night, grieving, I wrote a eulogy to Miles, but — with the battle over — the flu that I had held at bay for a week roared over me like a Malibu breaker. When I surfaced this Monday, I made it through the first lecture and was taking a break when I visited Retrospect for the first time in weeks and discovered the current prompt — Pets. Convergence, coincidence, cause or effect? Who knows?

I don’t know if Miles “Binky” Davis was a pet. I know he was a great physical and spiritual presence in our home and the serene leader of our domestic animal kingdom. Anyway, here’s what I wrote about Miles the night he died, while I drifted in the strange convergence of grief, shock, and illness. 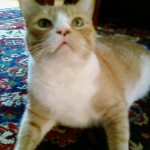 Miles “Binky” Davis passed away on Wednesday, March 23, 2016. Thirteen brief years earlier, Miles began his life as a foundling bundle of orange and white fur, no larger than a baby chick. Five  years later, he weighed 25 pounds and was, according to his veterinarian, “built like a linebacker.”

Physical size, although it characterized the noble orange cat, was the least of his accomplishments. By the age of six, Davis had developed an affinity for the trumpet, doubtless inspired by his namesake, the innovative jazz performer and composer.

In order to pursue his musical dream, Miles developed a trumpet valve system that did not require opposable thumbs and a special mouthpiece to accommodate the unique demands of feline armbiture. Davis spent most of his career playing with the Parisian-style cabaret band, the Tilibese Quartet.

In accordance with his serene spirit, Binky effortlessly assumed the heavy responsibility of Wuwu of the Duchy of Beachwood Terrace with grace and aplomb. A master of delegation, Miles placed most of his trust in his Chancellor of the Exchequer and the humans who cohabited the feline-driven Terrace de Bois sur la Plage. Virtually every human who met Miles as Wuwu willingly served him and the kingdom with great respect and devotion.

Miles’ sylfan lover and musical partner, the Siamese beauty Louise Tilibese, served both as singer-songwriter in the Tilibese Quartet and as his most trusted political adviser. It has often been considered remarkable that Miles “Binky” Davis enjoyed such notable success as both musician and secular leader, given his great proclivity for and profound dedication to sleep.

Lest we forget, Binky Davis also provided invaluable editorial assistance to the writers in the Duchy and his presence practically guaranteed literary flow and profundity.

Miles “Binky” Davis will long be cherished for his great power, spirit, and diverse talents.