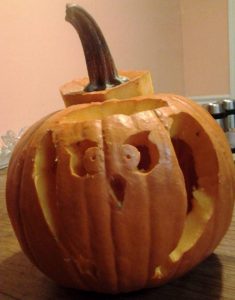 Owl jack-o-lantern I carved with Molly, 2015

I first published this story on October 27, 2016, for the prompt Halloween. That was my first year writing for Retrospect, and every topic was new. Since you who are here in 2021 have not seen it (except Betsy and John), I have moved it to this prompt, and will probably move it back when the week is over.

Celebrating Halloween through the years with costumes and candy.

When I was growing up, Halloween was a fun evening, but not nearly as big a deal as it had become by the time my kids were observing it. My parents didn’t carve jack-o-lanterns or decorate the house. I know I went out trick-or-treating every year, and I certainly wore a costume, but I am surprised to realize I do not remember what any of them were. I got some goodies from the houses in the neighborhood, and also collected pennies for UNICEF in those little cartons. In contrast, my kids got massive amounts of candy, and nobody seemed to collect for UNICEF any more. The houses in my neighborhood now are elaborately decorated, although the most I have ever done is a pumpkin on the porch and some spider webs. The treats I received in the ’50s and ’60s were home-made, cookies or candy, none of it wrapped. By the ’90s, when my kids were going out, that was unthinkable, and everything had to be carefully checked after they brought it home, because of stories about razor blades or other dangers that might lurk in the treats.

In high school and college I paid no attention to Halloween. However, in my twenties, after I moved to California, I started going to, and then later hosting, Halloween parties every year. For a while my go-to costume was a little girl. I would put my hair in high pigtails with ribbons, draw a circle of rouge on each cheek, and wear one of the teeny, tiny dresses with puffed sleeves that I had actually worn to work only a short time before. I would also carry the teddy bear that I still kept on my bed, which I had won at the Orange County (NY) Fair when I was 12. (There’s a great story attached to that teddy bear, but that’s for another time.)

My first year of law school was when I first created this costume. I went to a party attended primarily by third-year students, so I didn’t know too many people there. I was standing near the refreshments when a guy named Tom walked past me and disappeared into the next room. He had a coat on, so I didn’t see his costume as he went by, but I heard a big commotion coming from the next room. I walked back there, curious about the uproar. Tom was standing with his back to me, surrounded by laughing party-goers. I tapped him on the arm and said, “turn around, Tom, let me see.” Tom turned around, flung open his raincoat and flashed me! He had nothing on underneath. I was mortified. It was the talk of the law school for days, the flasher and the little girl! However, that didn’t stop me from continuing to wear my costume in later years.

This picture was taken after I graduated from law school, and had bought a little house in Sacramento, where I threw my own Halloween parties. Here, instead of my teddy bear, I am holding my cat Loretta (named after Sweet Loretta Martin in the Beatles’ song “Get Back”). Unfortunately the pic doesn’t show off my little puffed-sleeve dress very well, but you can see that I have yellow bows in my pigtails to match the dress.

Once I started throwing an annual party with the same guests, of course, I had to come up with different costumes. One year I was Miss New Jersey, wearing a sequined evening gown that I had bought for five dollars in Filene’s Basement for a show I had been in at Harvard Law School, and a genuine beauty-pageant tiara that had crowned my sister the 1964 Cherry Blossom Queen of Essex County, N.J. Another year I was a disco dancer, which wasn’t hard to put together, since I still had the clothes I had actually worn to go disco dancing not so long before. Somewhere there are pictures of all my parties, and if I ever manage to organize my hundreds of packages of photos I may find them.

Sadly, after everyone in my crowd started getting married and having kids, there were no more Halloween parties. Then we all focused on making Halloween special for our growing children. Once they were old enough to go out trick-or-treating, my husband and I would take turns going around with the kids or staying at 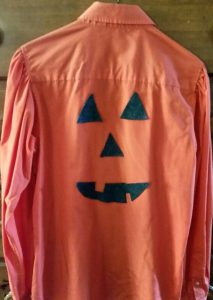 home giving out candy to others. At some point, I decorated this orange blouse to wear when I was answering the door, and I still wear it every year. Of course, from the front it just looks like a normal blouse, and it’s only when I turn around, after answering the door, to pick up the bowl of candy that the trick-or-treaters can see this jack-o-lantern face on the back. I’m not sure how many have noticed it though, they are generally pretty focused on the bowl of candy.

We still get a lot of trick-or-treaters in our neighborhood. It’s fun to watch all the little neighbor kids growing up. Later in the evening we get bigger kids, most of whom have driven in from low-income neighborhoods. I don’t mind as long as they are wearing costumes. When they aren’t, I don’t want to give them candy, but that can be risky so I generally do. If we run out of candy, we turn off the porch light and pretend we aren’t home, but usually the amount of candy we buy turns out to be about right.