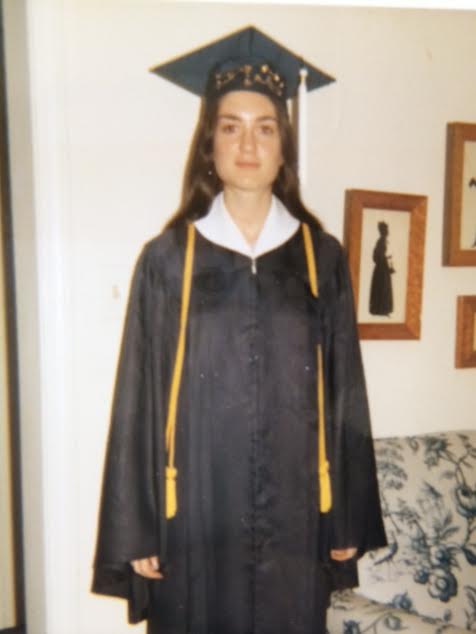 1970 was a turbulent year. Four of us graduated with perfect grade-point averages, but we were not asked to give remarks at graduation. I think the school feared what we might say. It was just a few weeks after protesting students at Kent State were shot by National Guardsmen. So I had to be content to garner my awards at the ceremony the night before. I had a clean sweep, taking a certificate for merit in French, Theater, the Royal Oak Musicale Award for Musicianship, a small scholarship for someone who planned to continue to study theater in college, Junior Phi Beta Kappa, something from the National Thespian Society. I have all the certificates in a scrapbook dating back to second grade. The scrapbook ends with my college commencement program. I remember being called to the podium repeatedly during high school commencement.

I remember little from the actual graduation ceremony. Only that it had rained while we were inside the gym. After, we all went home, changed and reassembled for our all-night party. I went with a small group of girlfriends, but before going back, we got really drunk — for the first time in my life…on sloe gin. It tasted like cough syrup. As I re-entered the gym I encountered parent chaperones from my neighborhood, temple members, pillars of the community, who congratulated me on all my success. I tried to gather myself so they wouldn’t know I was out of my mind. Did I get away with it? I quickly moved on.

Everyone assembled in the cafeteria for the “fun” awards. I received “most likely to succeed”. 46 years later, I wonder what everyone would think of me now. I stay in touch with two friends, so who knows.

We went back into the gym, tried to dance, hung around, sat in a circle on the floor. My sandal-clad feet were wet, I thought from walking in the rain-soaked grass. I looked down and realized my prom date had thrown up on me! “GROSS”, was all I could yell. A friend took me into the bathroom to clean up. Initiation into drunken behavior for all parties concerned.

I slipped under the bleachers and took off my bra, shoved in into my Greek bag (a staple of the period). It was a novel feeling, a moment of liberation that carried throughout my college years. I sidled up to someone I had a crush on…he didn’t respond. The evening wore down. I realized I didn’t have a house key so I really did stay out all night.

I came home to a concerned mother around 7am. “Why did you stay out so late?” “I didn’t have my house key.” “I knew that and left the back door unlocked for you.” It had never occurred to me to check. I crawled into bed, exhausted, the effects of the long night beginning to wear off; some just taking hold.

4 Responses to No Valediction

The Graduate
by John Zussman

Up, Up and Away
by Suzy