One Decade of Pretty Shoes by Marian
50
(93 Stories) 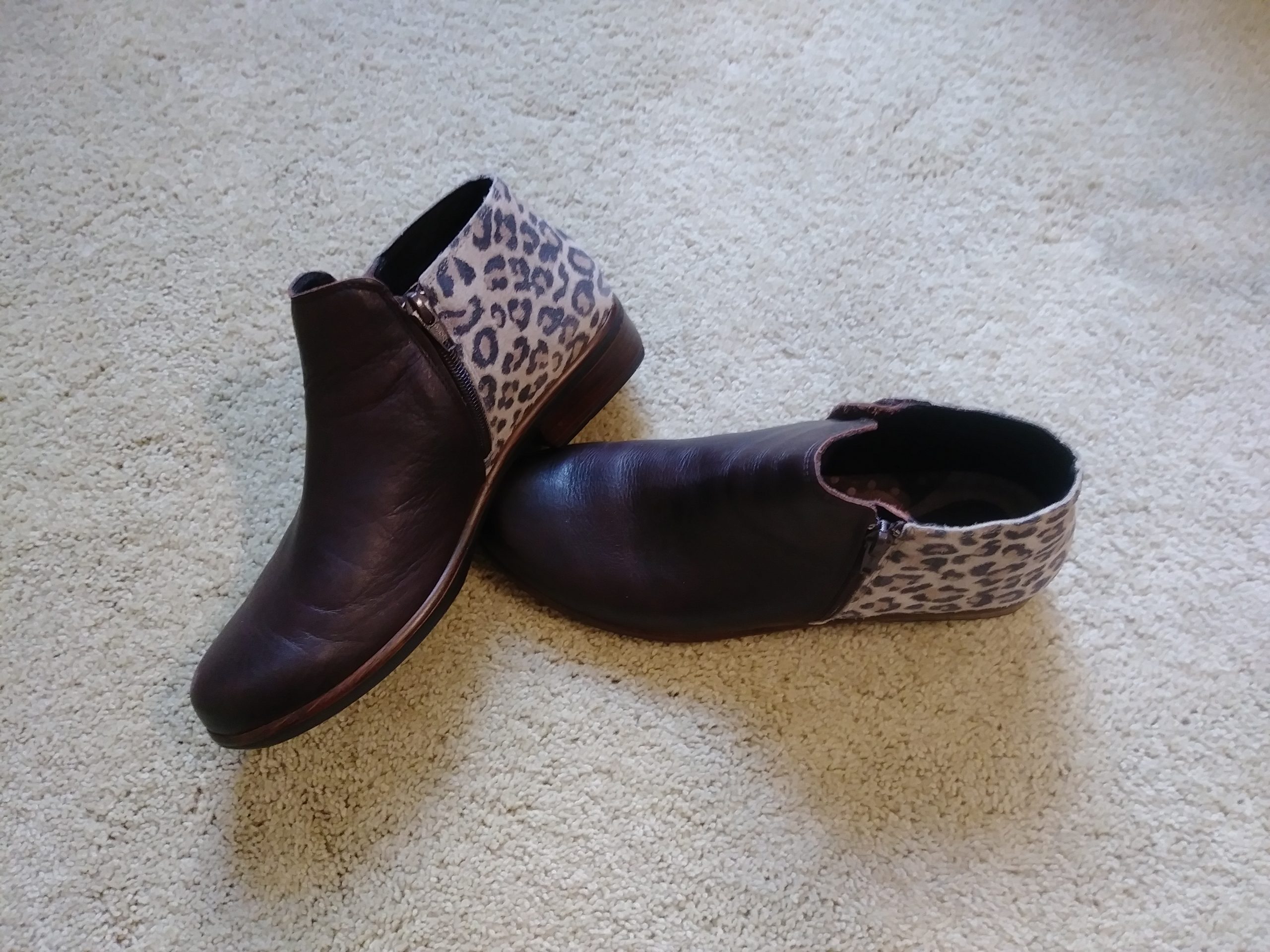 Best. Shoes. Ever. No, not the featured photo, which shows my best shoes in the present. I no longer have my best shoes ever. They were a pair of snakeskin pumps, from Italy, with notched open toes and slender heels, dyed in patches of blue, violet, and green, some of my favorite clothing colors. Sexy, yes, but in a classy way. Expensive for a single-income freelancer at the time, yet remarkably comfortable and rugged. When I put them on, I stood almost 5’9″, an asset when I had to deal with men in business. I wore those pumps for years, during my “pretty shoe decade,” my 30s. Before and after that, a very different story.

No Buster Browns, Keds, or Thom McCanns for me. Just, ugh, saddle shoes ...

As a child, I had what were called “bad feet, “weak ankles,” and the like. Adults clucked their tongues and shook their heads at my slender feet and delicate toes. “Have her go barefoot,” the doctor told my mother, who was horrified. “No, never let her go barefoot,” others said. Most kids’ shoes didn’t fit. Either my feet swam in them or I walked right out of them. No Buster Browns, Keds, or Thom McCanns for me. Just, ugh, saddle shoes, brown and white with laces. No one but the girls who went to Our Lady of the Lake parochial school wore them!

By middle school I began to rebel, and finally found a pair of penny loafers (and did put pennies in them) that I could wear with very thick socks holding them on. In high school, I managed with boots and Mary Janes, and by college in the counterculture era, with sneakers and sandals. In my early 20s, life was still casual. For my first real job, which was in a dangerous part of Oakland, I wore jeans, carried a backpack rather than a purse, and laced my hiking boots tightly. For my next job in San Francisco, I had to walk 15 minutes from the bus terminal to the office, so I kept shoes as practical as I could.

Shortly before I turned 30, I discovered beautiful shoes from Italy. Not only stylish, but they actually fit! I could get them in 7-1/2 AAA or 8 AA and they were comfortable. By this time I’d given up impact sports, my feet feeling “delicate,” so no stiletto heels or pointed toes. I chose carefully because of the prices, but really enjoyed being fashionable, especially in my best shoes ever.

A few months before I turned 40, early one morning I padded out on my driveway, barefoot, to pick up the newspaper. I felt a sharp pain under the ball of my foot and thought I must have stepped on a twig. That night my foot swelled, and the pain was severe. When I broke down and went to the doctor after a few days of limping, he told me to wear good shoes for a few days–nothing apparently wrong. The pain got worse, and I couldn’t move my toes. The second doctor shrugged and told me he didn’t know what was wrong, but I could have nerve damage and probably wouldn’t walk normally again. His advice was to get a cane.

After 10 days, panic set in, but in a miraculous coincidence my then husband, a competitive middle distance runner, was pals with Dr. Saxena, an acclaimed sports medicine podiatrist. The following day I was in his office and had a diagnosis, both the acute problem and the root cause. I’d stress fractured a tiny sesamoid bone under my middle toes, which had displaced and cut ligaments and nerves. “It’s lucky you came in when you did,” Dr. Saxena explained, “because in another couple of days the nerves would have been completely dead and you’d have lost the use of your leg below the knee.” He then showed me the x ray, full of little bumps on the bones, indicating a long history of other stress fractures that I hadn’t even felt.

The root cause? A hereditary, congenital, degenerative malformation of the sesamoid bones, the worst Dr. Saxena had ever seen. The next months were filled with rehab with June, my wonderful physical therapist, including tissue massage so painful that it was like childbirth every time, and nerve patterning exercises twice a day to rebuild the lost connections from my brain to my foot. My walking would never be totally normal, but I could gain the appearance of a natural gait. After I completed the rehab, June told me that 90% of the people would have given up and gotten the cane.

My first shoes during and after the rehab made me look like a mail carrier: size 9 medium, with ties and/or straps, very incongruous given my slim ankles. They needed to accommodate my still swollen foot and my custom designed orthotics from Dr. Saxena, which I would need to wear for life to protect both feet from future fractures. About a year later, we moved, and it was time to accept the inevitable. I gave away all my Italian pumps, including my best shoes ever.

Making peace with my feet

The first couple of years after my rehab were challenging for finding shoes that looked remotely normal. Athletic shoes were fine, but dressy shoes were another matter. Occasionally I’d luck out with Mary Janes, and I was allowed a heel of 1-1/2 inches. My feet were now an 8-1/2 narrow, but the shoes needed wide toes to fit the orthotics, and a very narrow heel so that they would stay on. I soon learned to avoid department stores, where the salespeople snickered at me, and stick with specialty shops, where the people were more knowledgeable and had empathy.

I’ve evolved a shoe shopping strategy that entails stopping off at a few shops every couple of months (before COVID) and now in addition scouting for possibilities on their online stores. If I find shoes that work after I try them on in person, I buy them immediately, whatever the price, because if I don’t, they will be gone. Should I find anything in a distinctive color (other than black or brown), that’s an incredible bonus. I keep shoes for a long time.

The good news is that shoe options have improved somewhat because many baby boomer women have abandoned their high heels, and there is a growing market for shoes that are attractive but healthier for the feet, like those in the featured image. Also, I learned a lot about men from this experience, because a couple of years after the “crash” I was divorced and starting dating. At dances and dinners, meeting strangers, I couldn’t wear the sexiest shoes, although I did the best I could. It became easy to weed out the jerks who made nasty comments about my shoes without asking why they were different. I found out a lot about a man’s character and priorities.

Finally, my bare feet are really pretty, with straight toes the way nature intended, and no bunions, callouses, and other annoyances, because I have to wear shoes that don’t deform my feet. I may have missed the Manolos, but my feet, with help from orthotics and good shoes, should carry me well into the next decade.

22 Responses to One Decade of Pretty Shoes