You would think that with the name Mr. Ed, I wouldn’t have much to say about shoes. What is there to say about U-shaped pieces of iron nailed to my feet?

There’s not a lot of variety in horseshoes, insofar as I can tell. But having grown up in the shadow of Cal Poly – San Luis Obispo, I will proudly note (or note the pride of the community) that Cal Poly was one of only two institutions of higher learning in the 1960s that taught horseshoeing as a college course. Every few years the professor in the Ag school would appear on To Tell the Truth or some other television show and dare the contestants to guess his occupation. We were so proud.

At the time, Cal Poly was trying to figure out what it was – an agricultural school, a technical school, or what? My father, who taught in the Mathematics Department (housed In a building proclaiming on the outside that Mathematics and Home Economics was taught inside), had courses that ranged from differential equations to …. Ag math. Oddly enough, Ag math was one of his favorites. The first thing he did was throw out the textbook where they discussed bushels, pecks, (not kopeks, God forbid) and hectares, and substituted instead real world problems of yields, markets, and maximizing allocations of inputs. According to him, the students loved it.

But back to shoes. I have a few distinct memories from my youth. I recall some trendy shoes with a mechanism on top that slid down instead of shoe laces to close them up. My brothers and I all wanted a pair. Our parents weren’t having any of it. We needed sensible shoes that would provide support. But come age 12, the summer Boy Scout High Sierra hike required hiking boots, and we got some. As I recall, they were Red Wing boots, and indistinguishable from work boots. They were very sensible, well built, and cost about twelve dollars. About a year ago, Red Wings came back in style for the cool 30-ish crowd. They now go for $150. My stepson, Ben, bought a pair. With his own money, of course.

I had a terrific time in the Sierra Nevada, and the boots served me and my brother well. It was upon returning home that the trouble started. One or two weeks on the trail were not even close to ensuring that we got the full value of our parents’ investment in our feet. The solution, of course, was to wear them to school. Talk about humiliation and being irredeemably uncool. At dinner, the question was, “Did you wear your boots today?” Never being good at lying, we’d fess up, and answer, most days, with a no. But the next day we’d have to go out again with the boots. I don’t know precisely how it ended, but I think somehow my father was reminded that as an even younger child, his mother made him wear long underwear to school to protect her precious child from the brutal sub-zero Wyoming winters. Although protected from the weather, he had no protection from his teasing classmates. His solution was to enter an empty garage on the way to school, change out of the embarrassing clothing, and change back on the way home. Perhaps reminded of this, the subject of boots was dropped, and my feet soon grew large enough to make them unwearable.

Then there were the tennis shoes pictured on the announcement of this week’s prompt – black, low-top Converse Jack Purcell shoes. The cool kids wore these with, oddly enough, light blue Levis. Unfortunately, the Jack Purcells cost about $10, a full twenty to thirty percent more than “perfectly functional” Keds. So we never got our Converse shoes, which now go for $65 or so.  And the specially colored Levis were out of the question. But somehow we survived.

Decades layer, these memories remain. My only intervening memories relate to wing tips and Bally Loafers for court appearances, the Birkenstocks that became de rigueur for a number of us government lawyers to wear in the office, and a gift of half a dozen pairs of assorted shoes from a friend of Ben, who had them gifted to him. The Birkenstocks were interesting because they were, to a degree, hip and trendy. Our agency General Counsel wasn’t happy about them, but he wore garish leisure suits to the office. We concluded that anyone who showed up in a leisure suit could not complain, as he lacked standing , no matter what shoes he stood in.  And as the years have passed, leisure suits are out of style (if they were ever in) and Birkenstocks have gone in and out of style and kept my feet reasonably healthy – although I certainly don’t wear them every day. And never to work.

As for the gift through Ben, I feel I had, for an instant, a collection of currently popular shoes, if only because they were purchased by the assistant to a Hollywood producer, who apparently buys most of the producer’s clothes. The ones he doesn’t like, or which don’t fit, he gives to other employees, including Ben’s friend. And if they were purchased for someone in Hollywood cool enough to have a clothes buyer, they must be cool, right?  I still have, from left to right in the featured image, the nifty green (not black) Jack Purcells, the Toms, the Black Nikes, and Clark’s Desert Trek shoes from that acquisition. (Should I name them Jack, Tom, Nicky and Clark?) I quickly threw away the ones that had individual compartments for each toe. And to the dismay of my trendy daughter, I wear New Balance shoes on the tennis court (not gifted) – apparently the epitome of uncool. 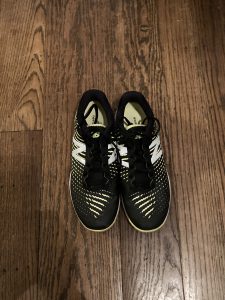 14 Responses to More than Horseshoes