Our Family by Dean Ebesu
5
(7 Stories) 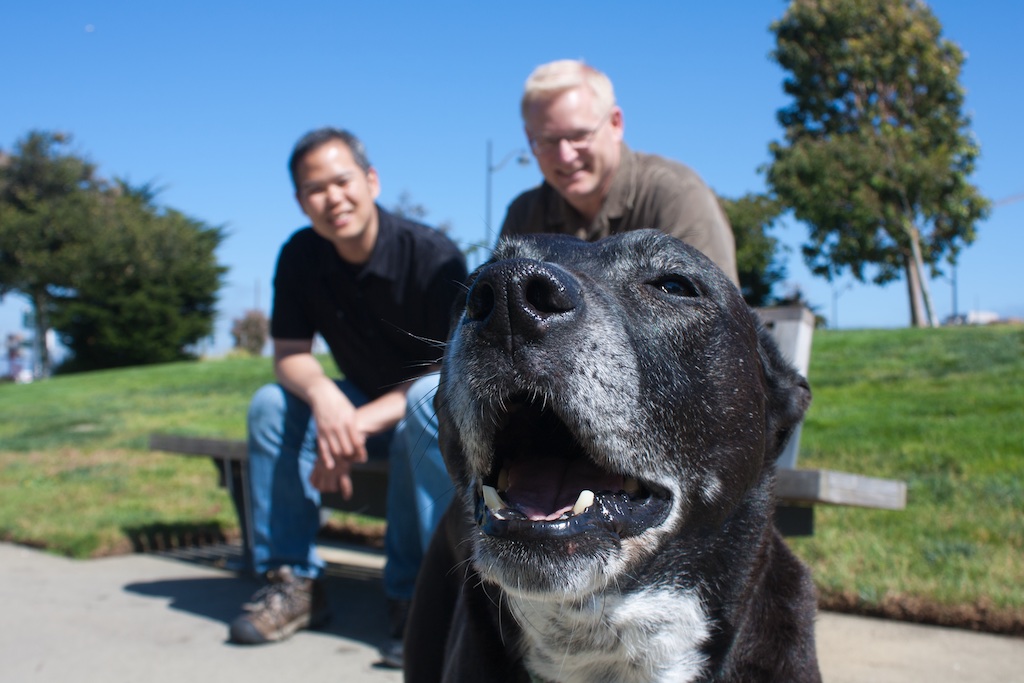 This is a letter I wrote to my friend and partner for his, umm, *significant* birthday…

Remembering a dear member of OUR family

It was 15 years ago, on Friday the 13th of August.  You called me and said, “We have a unique opportunity!”.  So many things ran through my mind.

“If we decide we can’t keep him, then I can take him back on Monday.”  I then knew what you meant.  And meant to do.

He was so small and his ribs were visible even with his distended belly.  He looked us in the eye, as if to claim us as his own and eagerly licked our hands, noses, and whatever we placed within reach.  He didn’t go back on Monday.  Or any other day for that matter.

We were two bachelors, newly partnered with each other, and still very independent individuals.  We didn’t know the first thing about being a household and raising another creature.  What we did know, however, was that we wanted him to be a member of our family and not just some poorly trained animal.

What followed were numerous training classes and thousands of walks with sits, downs, and stays sprinkled here and there.  There were many chaotic breakfasts with a barking dog on the sidewalk, broken chew toys, and  household accidents.  We stood outside the front door for minutes, trapped by our desire to train an anxious dog not to bark but worried that walking back in would reward him for it.  So many treats.  So many poop bags.  So many memories.

It took me a long time to bond to him but it took him less than a week to bond to us.  That week we threw a party for over 60 attendees.  We were so busy cooking and entertaining that he screamed bloody murder until Steph took care of him until he fell asleep amidst the party.   After returning from a week-long trip to Hawaii with your parents, he ate until he threw up.  What we learned  later was that it meant he was happy we were home.  His pack was home.  At that time, he had lived with us for less than three weeks.

How many road trips did we take because of him?  A few to Mendocino, a few to Carmel, once to Tahoe, once to Point Reyes, twice to Palm Springs, and twice to Las Vegas.  We passed through Jenner, Bakersfield, Santa Barbara and Solvang.  We visited with Don and Larry several times and once to Gerry and Michael’s in Guerneville.  We went to Fort Funston and Chrissy Field more times than we can count.  I have pictures from so many of those trips.

Every day that we weren’t traveling, we took him on at least one walk.  Sometimes up to four.  As a puppy, he needed to burn off a lot of energy and we took advantage of his food-motivation to train him.  Remember that he would sit, stay, lie down, and stand rapidly in anticipation that we would rattle off those commands?

Remember when he could finally walk without a leash?  It was on one of those walks when he ventured off the sidewalk in between two parked cars and I screamed at him at the top of my lungs.  He reappeared on the sidewalk seconds later.  It was the last time he did that until he lost his hearing over a decade later.

How about the time he bit you?  Or when he had the runs at Tahoe?  Or when he barfed in the car?  Or the memorable “bidet incident(s)”?  We weren’t always thrilled about his antics, but those times seem to have made our times together so much more special.

How many hours did the three of us spend together, as a family?  How many times did we take him to the vet for a torn ligament, stitches, a belly ache, or shots?  Remember how we would compare his vet visits to the price of meat?

How often did we harass him with reindeer antlers, bells, ribbons, or the Singing Bass?  How many Christmas ornaments did he break thinking they were balls to play with?  He never messed with the Christmas tree after he pulled it down on top of himself.  We found him skulking, scared that we were mad (but probably more scared of the tree itself).

Looking back, he must have thought we were hopeless cases because he knew from the very beginning, as a scrawny abandoned puppy, what took us years to figure out:  that we belonged together; that we needed each other; that we were a family.  In a time when we weren’t recognized as a family, he knew it, and he brought us together in a more lasting way than any document, ceremony, or liturgy could ever have done.

He is now gone, 15 years later, and we can now be recognized as a family.  But it seems so formal compared to what we gained in the meantime.  The bond he helped to cement hasn’t weakened in his absence.  In fact, it has grown stronger because we have since learned how to build on the lessons he taught us even without his continuing presence.

He taught us so much and we will never stop missing him.

4 Responses to Our Family