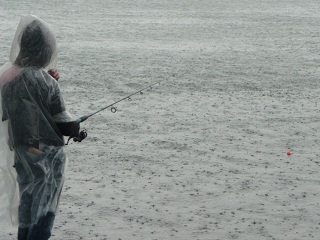 I was watching the tiny rain drops sprinkle the surface of the water on the swimming pool this afternoon and all of a sudden I was whisked away to a day when I was 12 years old standing alone in some green rubber rain gear by a small lake my father built for me. It was cloudy, the light rain was drizzling and I could hear the thunk, thunk of the rain drops as they hit the rain gear that lay over my head. 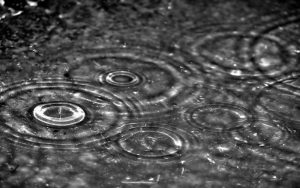 My fingertips were cold as they stuck out of the end of the raincoat while I held my fishing rod and stood quietly so as not to spook off the rainbow trout. The trout don’t mind the rain and they even enjoy the offering of a red earthworm if you stand real still. Thunk, thunk, thunk, more rain and now I can feel my teeth begin to chatter. Dad never seems to get cold but I am always cold it seems. How does he do it? Wait…. did you feel that? That was obviously a bite. I don’t feel the cold any longer and the long walk down thru the pasture and down the old cattle trail to this special place was worth it after all. 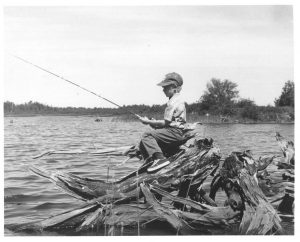 Then the line takes off and the hook has fond it’s mark as the hungry rainbow makes his run and the drag on the reel sings out as the rod tip bends and shakes. I am as serious as if it were a 225 pound sailfish in the Sea of Cortez as I bite my lower lip and feel the shake and pull of the trout as he pulls the light fishing line to test it’s limit. I allow the rod tip to give way at the exact time so it won’t break off. Then as I lift the rod tip and slowly dip it down I begin to reel in line as I work around the small limbs of the alder saplings so that the line wont tangle as this wise trout tries to head for cover. But there comes the time when the trout tires and I know the battle is over and finally I see the side of the rainbow come within my grasp. As I gently lay my hand under the side of the fish and raise him so I can see this creature, so amazingly beautiful that it would make a diamond jealous, I can see his eye looking at me. As I lay my rod in the damp grass and carefully grasp him he tries one more time to slip away while I remove the hook from the corner of his lip. 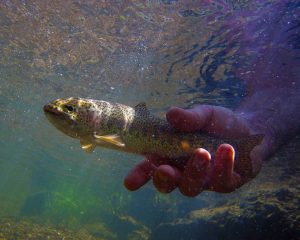 As I slide my hand back into the cold green water and release, he slips gently back into the wetness and he is gone. As he slipped away…. Reality returned and I realized it was only a swimming pool…. no alders, no green raincoat, no trout. Even though I realized my fingertips were cold, and the trout was released, I had captured a moment which has lasted me a lifetime.

One Response to Rain Drops On The Trout Pond