Prompted By The Beach
12 comments. 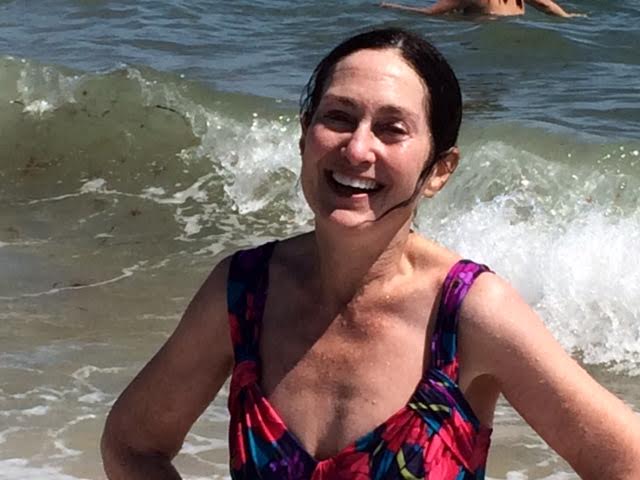 We are lucky to own a home on Martha’s Vineyard. This paradise island, 7 miles off the coast of Massachusetts, has been settled since the early 1600s, and been a vacation destination since the 1800s. Comprised of six distinct towns, we own a historic colonial, the Holmes Coffin House, built in 1829 in the village of Edgartown. Each town has its own flavor and function, from seaport to farming community. Each also has different beaches, a few private with keys passed down from generation to generation, one nude beach all the way at the western tip of the island, a few beaches known for calm shores. The 1975 blockbuster movie “Jaws” was filmed on State Beach, which runs along the road from Edgartown to Oak Bluffs, on the eastern coast and is littered with umbrellas, wind surfers and babies on a hot summer day. The water is usually calm.

We go to South Beach, which runs along the entire south coast of the island, but at our end, runs 3 miles long. Edgartown is the eastern end of the island, and not really a port town, though in the summer, a small non-car ferry comes into our harbor a few times a day. Our town has the old porticoed homes built by the whaling captains, so is the most elegant of the towns. The downtown has a fair amount of good shopping, along with the requisite ice cream and tee shirt shops.

But the expanse of the beach goes on and on. You could have friends on the beach and not know they were there. There is a huge undertow so you must watch the little ones. Both our kids were pulled under when they were young and had to be rescued by Dad. We often see a seal, bobbing along just past where we might be swimming. The waves kick up and it can be difficult to get out of the water. Parking is all along the road; one then walks along the dunes to get onto the beach, not far at all, but much better now that our kids are grown and we don’t have to carry loads of toys, food, blankets and other paraphernalia.

We have a nice, large group of friends who all sit together on the beach. We sit, read, nap, talk…all very pleasant. Plans for the evening will be made that afternoon. If you skip the beach, you won’t know what’s going on. We’ve watched the kids grow and now there are grandkids around the circle (not for us). There is support of all sorts – lawyers, doctors, builders, insurance brokers, social workers, speech therapists; great professional help comes in all stripes at the beach. You can always find out what is the best book, the new movie, who is doing what in the current political climate (we are all liberal, but interesting points of view are expressed). Good conversation, good friendships, long walks all flourish at the beach.

Food is eaten (though I have been dieting for years now). One must be mindful of the gulls. They are big, bold and everywhere. Fearless, they swoop in and will take food right out of your hand, even out of the corner of your mouth! So we are mindful of what we leave around; nothing is left uncovered. The guys and younger girls go into the ocean. We older women might dip our feet. Occasionally (as seen in the photo), some of us actually swim, but not often. I find it difficult to get out if I do go in. And salt water is brutal on the hair. But on a hot day, there is nothing more refreshing. And the smell of the ocean is cat-nip, even for this native Michigander. It brings up images of waves, sand, surf, setting sun, the occasional hurricane (thank goodness we haven’t had a big one in a long time, but the immense power is still something to reckon with).

When our kids were little and the house was new, we went to the Vineyard in the winter and drove out on the beach when everything was frozen. The kids got out of the car and romped around, delighted with the crystalline sand, playing, bundled up their snowsuits and mittens. It was a magical time in our lives. The beach took on a different light altogether. It has provided indelible memories.

Remember (Walking in the Sand)
by Suzy
Salt Water, Lemon Ice, and No TV
by Marian

The Jersey Shore
by muzziesgirl