I set out for California in a three-quarter ton GMC panel truck that burned oil quicker than gasoline. No matter, I had some pals, some cash, a stash, a map, and a mission. When I landed in San Francisco, I re-joined the Mime Troupe, a radical theater company that performed free shows in the parks and took them on the road. We adopted old plays and characters from 16th century commedia dell arte and pounded them into a Viet-era theater for the oppressed.

Lured by our warm up music and a commedia-costumed parade, a crowd of assorted humans and dogs would sprawl in the grass around our funky portable stage. During shows full of masks and feathers, pratfalls and décolleté, our spectators laughed, lounged, and swapped green gallon jugs of Red Mountain wine for tokes of sugar-cured Mexican weed. After the show, the Mime Troupers would pass the hat and hustle spare change.

One sunny Saturday after the show and before SF’s wintery summer fog rolled into the park, I threaded through the crowd, hat in hand. A diminutive man stood up. He wore wispy mutton-chop whiskers beneath a cloud of thinning hair. A warped pair of metal-rimmed glasses clung to the bridge of his nose

The diminutive man smiled and dropped a white pill the size of an aspirin into my commedia character’s military-green beret. “You’ll like this,” he said and disappeared.

Dope in the hat? I didn’t inhale, swallow or otherwise ingest substances that well-wishers dropped  into my costume hat. The Haight-Ashbury was losing its hazy sunshine glow; meth and heroin had begun to tear up the community.

I peered into the hat — crumpled dollar bills, dimes, quarters, two rolled joints, a condom and a cookie. The little white pill gazed up at me. Maybe it was okay. The diminutive man’s smile felt unpretentious, authentic; he lacked the phony glow of hippiedom’s hysterical gaze. Besides, there was something familiar about him.

The crowd dissolved. We changed out of our sweaty costumes, struck the portable commedia stage, packed the props and curtain into the back of the Mime Troupe truck and scattered, just as the wintery summer fog charged over the park, ragged white birds against a blue sky. I tucked the pill into my jeans’ pocket and split. 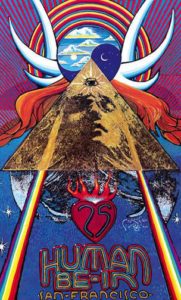 That night, I rambled from my Waller Street pad to Van Ness and ventured into the Avalon Ballroom to check out the bands that Chet Helms and the Family Dog had assembled. For a buck and a quarter, you could dance, listen, watch, or trip to Bo Diddly, Country Joe and the Fish, The Quicksilver Messenger Service, Moby Grape, the Paul Butterfield Blues Band, Jefferson Airplane (pre Jefferson Starship) Janice Joplin with Big Brother and the Holding Company and a straight-ahead Brit blues band called Fleetwood Mac before Stevie Nicks hit the scene.

A gallery of Avalon event posters hung in the lobby. Dancing around a central image, each poster announced a different musical lineup with psychedelic but precise intricacy. Transfixed by the concert posters, I fished the white pill out of my jeans pocket and swallowed it.

The Avalon Ballroom featured an open floor that often coaxed people to dance in a circle. Nobody set the rules but dancers, with or without partners, would begin to swirl to the music, forming a fluid galaxy spinning free, always counterclockwise.

Already buzzing, I walked to the edge of the floor feeling the dancers whirl by. My head floated toward to the ceiling. I must look all stretchy, I thought.

How does he play so matter-of-fact while luminous lines rippled off his silhouette? The universe keeps him straight with square black glasses and a black Stetson with weird medallion. Bo Diddly’s square red Gretsch guitar reverbs the clave beat, Bo Diddly professional in a red plaid jacket. This man is freaky like William Burroughs but he rocks ‘way different.

Avalon bands played loud. Mammoth Marshall stacks fought the draconian PA system for decibels. Kids curled into fetal positions inside the mouths of PA speakers. The concussion of each beat massaged the room. My head returned from the ceiling and I began to move.

Quicksilver Messenger Service guitars flash sound from mercury strings. I reach out stretchy arms and dive into the vortex of limbs and hands and fingers and hair and teeth and smiles.The world goes real — easy, slow, strong, calm.

One side of the ballroom was lit, the other in semidarkness, as if we were the earth, all the people spinning together from light to darkness, each rotation taking no time and an eternity. Quicksilver finished their set. The spiral continued, unstoppable. In the silence between bands, no lights, no canned music, the vortex rotated, dark to light to dark, hair, eyes, mouths, bellies, breasts, legs, sexual, sensuous, asexual.

Big Brother, out of tune as always, set up the first song. Janis makes her entrance, floating above the crowd, beaming down, sister in a homespun cotton dress, arms extended. A wide soft smile makes my face shine rosy. We all live together in this town and we call it Free City.

The diminutive man appeared before me. I pointed to a poster projected on the screen. 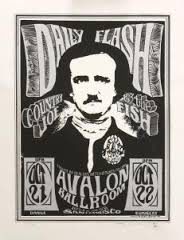 I went all giant and stupid in a blissful way. I twined my fingers through all the hair in the room. When I returned, mister Stanley Mouse had vanished.

For years, I tried to understand what that little pill was all about. It wasn’t acid. Yeah, there were hallucinations but mostly Mouse’s gift created a warm, strong, simple place where the galaxy came to earth. Later, I learned that — about that time — people were experimenting with methylenedioxymethamphetamine, a compound first synthesized in 1912 that re-surfaced at San Francisco University, the compound that would become ecstasy.

Thanks for the little white pill, mister Stanley Mouse, the man who illustrated a culture.

12 Responses to Stanley Mouse and the little white pill