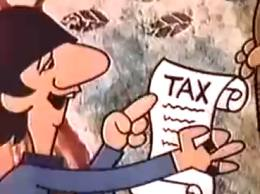 The Beatles, who had grown up poor, weren’t very happy to discover once they were making oodles of money that the British government was going to take most of it. Not sure if there was ever really a 95% bracket, but apparently it was pretty close to that for high-income earners in the 1960s.

When the song “Taxman” appeared on the Revolver album in 1966, it was probably the first time I had ever given any thought to taxes. Why should I? My father took care of all financial matters for the family, I don’t think my mother was involved or even informed about taxes. Certainly it was not something that was ever discussed with the kids.

In the summer of 1970, I got my first real job with a paycheck that had deductions taken out of it. When I expressed dismay that I wasn’t getting paid the full salary I had been expecting, my friends said don’t worry, you’ll get it all back in a refund next April. But when April came, I didn’t get a refund check like everyone else I knew. Why? It turned out that my parents had investments in my name, and paid taxes on the income, and had been doing that all or most of my life, unbeknownst to me. So the withholding from my paycheck just got added into the amount that was paid to the IRS. When I complained, nobody was too sympathetic – boo hoo, you made too much money to get a refund, poor you!

Throughout college and law school and the time between when I worked for the Department of Transportation, my father continued to prepare and file my tax returns and pay whatever I owed. New Jersey didn’t have a state income tax, and California did, so he was not happy when I decided to become a California resident. I did it so I could pay in-state tuition for law school, but it’s possible that the amount I saved in tuition did not make up for the amount of state income tax I now had to pay.

At some point around 1980, after I had a grown-up job as a Deputy Attorney General and had bought my own house, I started doing my own taxes. I can’t remember if it was my idea or my father’s. I have a feeling it was probably mine. Anyway, I got the forms from the post office and filled them out by hand, sitting at my desk at home. I think I got two copies, one to be the rough draft, which I did in pencil, and then another for the final copy which I did in pen. It wasn’t too complicated. I had mortgage interest and various contributions to deduct, and that was it. At that time, political contributions were deductible, and that’s where I spent most of my money. Nice to know that while I was helping candidates or causes I believed in, I was also making my taxes lower.

Once I was married, we had an accountant do our taxes, because she had been doing my husband’s taxes for years. His had been complicated by the fact that he owned a house he didn’t live in, and lived in a house that he didn’t own. Which in retrospect doesn’t seem that complicated, but it was to him at the time. Having an accountant do it didn’t seem any easier to me, because we still had to fill out her form that asked for all our information, and gather up all our records to give to her. I always wondered if she was getting the best possible result for us, but not enough to do the whole thing over again myself.

After we split up, I went back to doing my taxes myself, but by then there were computers to do them with. No more pencil and paper. Since I had two kids at this point, I filed as “Head of Household” which had much better tax results than being married. I later found out that my ex was also filing as Head of Household for the same two kids, even though he did not have them more than 50% of the time, which is the requirement for that status. I thought about reporting him to the IRS, because he was cheating them, but ultimately decided to ignore it. If the auditors had been sharper, they might have noticed that these two children had support that was greater than 100%. Nowadays, with everything so highly computerized, I bet it would be harder to get away with this.

When my current husband wanted to get married, I resisted for a long time because of the tax consequences. I wasn’t opposed to the commitment, just to the marriage penalty. When I finally agreed, we decided to wait until the following January, so that we could at least put off the tax damage for one more year.

We have experimented with different ways to approach our taxes, but in recent years we have used a tax program — TurboTax or H&R Block — and we sit down at the computer and do the whole thing together. Sometimes we get grumpy with each other, especially when the number in the “amount owed” box gets bigger and bigger, but it’s easier than having one person do the whole thing.

We just finished this year’s taxes yesterday, and sent them off to the IRS and the Franchise Tax Board. I was worried that we would get clobbered as a result of the new tax scheme foisted on us by the evil Republicans, but it didn’t seem to hurt us. Of course I still think it’s a disaster, and look forward to the Democrats taking back the White House and the Senate, and undoing the changes that were made to benefit millionaires. But I’m relieved that we didn’t turn out to owe anything — in fact because we way overpaid on our estimated taxes, we are getting a refund.

I remember saying when I was younger that I would never complain if I had to pay a lot of taxes because it would mean that I was earning a lot of money. Nice concept, but it turns out that I do complain anyway. I don’t mind so much paying state taxes, because, after all, my paycheck for thirty years was funded by the state taxes of every other Californian. But I do resent the federal taxes, particularly when I don’t approve of what the federal government is spending its money on (like a wall, or a war), and when I know that people who make way more money than I do manage to pay very little or even no taxes at all.

The Tax of Life
by Marcia Richmond Liss
I’m Game, You?
by pattyv

The “I Know Nothing About Taxes” Blues
by Betsy Pfau
<!-- End Facebook Pixel Code —>