My property has several mature trees. They are nice for the neighborhood but come with pluses and minuses. My cousin and next door neighbor came to talk to me about the, I’m guessing, 50 foot tall Douglas fir by the sidewalk in front of the house. Unbeknownst to me a big chunk of it had started to crack and threaten to break off. Big chunk as in about a third of the tree. The big hole with the raccoon’s nest may have figured in to the cause. Raccoons? Who knew? My cousin, Margie, and her husband, Dave, had taken to sleeping in their basement during windstorms as their bedroom is quite close and in the line of fire. I had no idea.

A guy had to go up into the tree, swinging around on ropes, a real life Tarzan.

They know a tree guy, a former neighbor named Jason, and gave him a call. $1,800 to trim it, more like $3,000 to remove the tree. It sounds like a lot of money until you realize they have a crew of three and two trucks and other heavy equipment and it took all day and they cleaned up after. Oh, and the catch with removing it, the city passed a rule last year that, in the case of a tree this size, one would need a permit to remove it and would then need to plant 5 trees in it’s stead. Now I love trees, but having already planted several don’t know where I would put them. This thing better survive the extreme shearing it got today.

Just last week the phone company installed a fiber optic line that had to be dropped to get it out of the way. I winced inwardly as I am loving the fast internet and overheard the workmen referring to the wire as ‘fragile’ (Happy to report it’s back up and all’s well.). And on the other side of the tree, despite great care being taken, one big branch came down onto the electrical service drop. I’ve got a work request in to the power company to come tighten the line back up. I must confess that a possible reason the wire is hanging so low now is that it had been being held up by branches some of which bore scorch marks. Yes. this needed doing.

Because of all these lines they were not able to use their bucket truck and a guy had to go up into the tree, swinging around on ropes, a real life Tarzan. I was impressed at his agility and speed. He balanced on those branches like an elf and could use a chainsaw ambidextrously. He also used a saw on the end of a long pole and another toy, a chainsaw on the end of a long pole. If something ran out of gas he let it down on a rope for a refill. A lot of wood came down as he ‘brushed and chunked.’ Some big heavy pieces would hit the ground with such a thud you could actually feel it under your feet from across the yard. He used to manage grocery stores before going in to this line of work. He says he loves it. His wife was there feeding brush into the big industrial chipper.

Jason did me a solid and for free he also removed a juniper shrub that had been taking over and we could no longer get at the water spigot or the seasonal shut off thingy. It looked nice on the outside but inside the branches were very tangled and it put up a good fight even with the use of the chain saws. There’s now a lot more sunshine in the yard. In the end Dave got a lot of firewood and a chunk of juniper for some of his fine woodworking projects.

It was a fashion show of hardhats. We’re not talking hipsters wearing lumberjack chic. No one was wearing plaid ironically. What biceps. Dave has an aluminum silver hardhat that flares out at the brim like traditional lumberjacks. Jason wore a neon yellow safety shirt and matching yellow hard hat, more like a bicycle helmet. The aerial guy had the type of hard hat with hearing protection earmuffs that flip up and down. 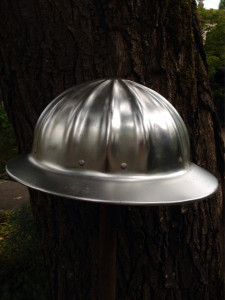 You know that feeling you get when you had long hair and got a lot cut off and it just feels different for a bit? I imagine this tree is feeling like that. The poor thing ought to fare a lot better in future windstorms as it had a lot of it’s ‘sail’ thinned out. It was a beautiful day for it. I brought a folding chair out into the yard and soaked up the sun while I watched the circus. Having watched all that hard work I’m feeling a bit tuckered out now.

4 Responses to The Big Tree Day