Prompted By What We Wore
5 comments. 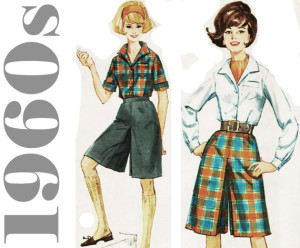 What happened when a new principal tried to impose a dress code in a high school where the students were not inclined to follow anyone else's rules.

I went to a selective public high school in New Jersey, with 15 girls and 15 boys in each grade. We were on a college campus, and didn’t have too many rules, and certainly no dress code. Well, except that girls had to wear skirts or dresses, but I think that was true everywhere in the 1960s. Then, my senior year, we got a new principal who had come from a Catholic school, and she decided to impose some discipline. One of her rules was that girls could no longer wear culottes. Culottes, for anyone who doesn’t know, are shorts cut with very full legs to resemble a skirt. Generally, when the culotte-wearer was standing still, she appeared to be in a skirt, and it was only when she walked or sat that you could see it was actually shorts. So culottes had long been our refuge against the no-pants rule.

The no-culottes rule was set to go into effect on a certain day, and the edict stated that any girl wearing them would be sent home. So on the night before that day, we all got on the phone to each other and agreed to wear culottes the next day. (We could do this because there were only 15 of us, but it was a lot more complicated then than it would be now, with the possibility of group emails or texts.) Luckily, nobody chickened out, and the next day, every girl in the senior class was wearing culottes. What could the principal do? If she sent us all home, there would be way too much disruption. The boys might even decide to leave in solidarity. So she caved in. That was the end of that rule, and as I recall, that principal didn’t last too much longer either.

5 Responses to The Culotte Rebellion