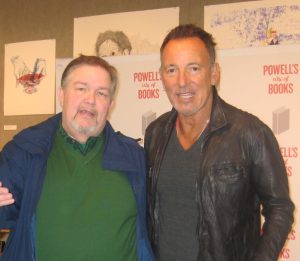 On Tuesday I joined about a thousand Bruce Springsteen fans at Powell’s City of Books in downtown Portland to celebrate the publishing of Bruce Springsteen’s self-written autobiography.  I went with my friend Adrian from work, who wanted to make sure he didn’t miss this rare opportunity to have his photograph taken with “The Boss”.

For 40 years my life has intertwined with the music of Bruce Springsteen. On Tuesday I was priveledged to meet Bruce, and it led to a time of reflection on the past years of my life.

When we arrived at Powell’s, about 11:00, the line already stretched from the main entrance of the mammoth bookstore down an entire city block between Burnside and Couch.  We were early and we had our tickets so we figured we had time to duck into Sizzle Pie, a local pizza joint and grab some lunch before we took our place with the rest of the Springsteen fans.  We gobbled down a slice and made our way to the line, which now stretched around the block and up another block.  We didn’t know that once we reached the doors we had only made it about 1/3 of the way to our destiny with Bruce.

We checked in, got our signed copies of his book and our wristbands and joined the ever expanding group which now went part of the way up a third block.  During our pilgrimage to the door we talked, a lot, about families, jobs, history with music, likes, dislikes and what we were going to do with the rest of our day.  After about forty-five minutes we were finally at the Powell’s door, but as I mentioned this was just the beginning of our trek.

We climbed stairs, zigged and zagged through carols of books, glancing at the governing subjects on the way.  Thousands and thousands and thousands of books, on every topic imaginable.  I wish I could remember all the subjects because it would make a great tome, celebrating our journey as we passed through the books on language, cooking, metaphysical studies and religion, architecture and design, but I know that with every changing topic we were that much closer to our opportunity to greet the man who had provided so many many hours of entertainment to so many many millions of people over a career that spanned more than 40 years.

As we passed book after book I thought about what Bruce Springsteen means to me, and how he fits into the story that is my life.

I reflected on how I had personally become aware of Bruce Springsteen, and how that awareness connected with my journey from my small town in Central Washington to Portland, my home for most of the last 40 years.  I love Portland, I think I have always loved Portland, well at least since the first time I journeyed here on my own to follow a girl.

I had just finished my first year of college at the local community college, or did they call it Jr. College back then?  I don’t really remember.  During the summer my love interest, who was a year younger then I decided she was going to move to Portland to attend Bassist college and study Fashion Merchandising.  I hadn’t had any part in the discussion, but I’m sure glad she decided to move here.

In October of 1975 I talked my folks into letting me travel to Portland to visit Vicki.  It represented my first trip on my own, other than a couple of trips to football games during my senior year in high school.  As I directed my Plymouth Duster over White Pass I had all kinds of emotions.  Freedom, adventure, more freedom, adventure.

I had an 8-track player in my car, but I didn’t own an 8-track tape of Bruce Springsteen music.  I had Grand Funk Railroad, probably three or four different tapes, Jethro Tull Aqualung, Yes Time and a Word and Fragile, two or three Pink Floyd tapes and most likely some Deep Purple, Sly and the Stone’s Greatest hits was always my go to, but not one tape by Bruce Springsteen.  Heck at the time he only had three records out.  Greetings from Asbury Park New Jersey, The Wild, The Innocent and The E-Street Shuffle, and this new one…Born To Run.

I landed in Vancouver at my aunt and uncle’s place, where I would set up camp for the weekend.  Then I buzzed across the river to see my gal.  She lived in a rooming house called “The Martha Washington” for young ladies who were attending any one of the downtown colleges in Portland, or just starting out and whose parents wanted the security of knowing their young ladies would be protected by a stout and inquisitive staff of matronly ladies.

It was great to walk around downtown Portland with Vicki.  I had been in other large cities, Seattle of course, San Francisco, Spokane, Los Angeles, even Portland, but it had always been with family, chaperoned or with no say in what the events of the day would be.  My cousin Cathy’s wedding, shuttling my grandparents to see their youngest daughter, my aunt.  I enjoyed being around my family.  My aunt Peg was the consummate hostess.  My uncle Fred was a gas.  Uncle Fred was the first man to have one thousand hours flying a helicopter and he worked for Aerospatiale, a French helicopter company, as a salesman.  I think they called them salesmen, I don’t think they had sales engineers, or sales consultants yet, but uncle Fred was one of those.  He was the best, hilarious, caring and he always made time for us kids.

As Vicki and I made our way, by car and foot around Portland we happened across the Paramount Theater.  I noticed a group of scruffy twenty somethings gathered around the entrance and a marquee that foretold of tonight’s concert.  “Bruce Springsteen and the E-Street Band” it shouted to those who travelled southward on Broadway.  Hmmm I thought to myself, and maybe out loud.  A concert, I loved concerts, but who was this “Bruce Springsteen”?  We walked on.  How sorry I would be.

I returned home that Sunday evening and as I left Portland I had a satisfied feeling in my heart.  I had completed this trip, I had visited my girl, and I was headed home….freedom.  As I drove away from Portland on the Interstate I could see the lights in my rear view mirror and I heard the city say, “Please come back soon”, and I would.

My parents took Time Magazine, and the school received Time as well as Newsweek, and low and behold, who should grace the cover of both magazines the Monday after my fabulous trip to Portland.  That’s right, Bruce Springsteen, the phenomenon, making a musical splash that would be heard around the world.  As you may have realized I kicked myself for not spending the twelve dollars for two tickets for a concert that was far from sold out.

I knew the song Born to Run, but not much else from that album, until a local band, The Raggband, or The Ragg added She’s the One to their rotation.  I loved that song, and ever since then I have loved the music of Bruce Springsteen.  I ran out, purchased Born to Run at a local record store, probably Budget Records and Tapes, from “Budget Bob”

I have made many trips to and from Portland, and moved here in 1981, the year between Bruce’s release of “The River” and “Nebraska”.  In 1984 I sat in my office at work and worked the push-button dialer to a frenzy trying to get tickets to Bruce’s concert in Seattle in support of “Born in the USA”.  I figured since we had multi-line phones at work if I didn’t get through right away I would just punch another button and move on.  Didn’t work.

My life in Portland has been pretty special.  I met my wife Linda here, we married here, we had our first child here, at a hospital that is now the American headquarters for Adidas.  Our second child was born elsewhere, but she is still a product of Portland ingenuity.

And now as Adrian and I have passed through these thousands of books, and in 2016 after Bruce Springsteen has entertained hundreds of millions of music fans, including myself.  As he has put out so many good records, my personal favorites are Born to Run and Magic, and played so many concerts that run about three and a half hours…or more I am a mere 10 feet from the man, The Boss.

As they led me up to the stage to meet Bruce Springsteen, I handed off my camera to a willing Powell’s employee.  I shook his hand, and thanked him for the many years of great music.  He was kind, he thanked me for being a fan and acknowledged my greeting with a “you’re welcome”.   Not a smart-ass comment as I would imagine some artists would offer, but a genuine kind of “I do this for you” attitude.  And then…I was being led off the stage with a “be sure to watch your step” as I walked away, probably three feet off the ground from the meeting.  It was over…and that was OK.

I had connected with the man who has done more for my personal appreciation of music than any other artist and I, as though I had eaten a good meal and had a great cigar, was satisfied.

3 Responses to The Day I met Bruce Springsteen