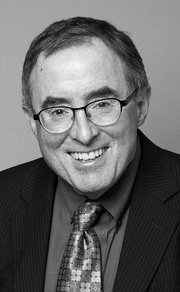 The baby-boom generation in America is thought to have found something approaching genuine happiness in material possessions. A popular bumper sticker back in the nineteen-eighties read, “He Who Dies with the Most Toys Wins.” This was thought to be a brilliant encapsulation of the baby-boom generation’s shallowness, greed, excessive competitiveness, and love of possessions. And it may well be all of these things. It’s also fundamentally wrong. Is there anything in the Hammacher Schlemmer catalogue—or even listed on Realtor.com—for which you would give up five years? Of course not. That sports car may be to die for, but in fact you wouldn’t. What good are the toys if you’re dead? “He Who Dies Last”—he’s the one who wins.

That sports car may be to die for, but in fact you wouldn’t.

Boomers realize the ultimate folly of competitive consumerism, of course. Don’t forget: back in the Dark Ages, we invented jogging. Most important, we invented the jogging shoe: a whole industry aimed right at the boomer sweet spot. Our knees now regret it—too late, too late.

The passion for Things and the hunger to acquire them are deeply rooted in yuppie culture. I win if my house is bigger than yours, or if my cell phone is smaller than yours. Or if my laptop computer is thinner or my hiking boots are thicker. And yet all this is meaningless, isn’t it? And I don’t mean that in a spiritual or moral way. Be as greedy and self-centered as you want. The only competition that matters, in the end, is about life itself. And the standard is clear: “Mine is longer than yours.”

But the last boomer competition is not just about how long you live. It is also about how you die. This one is a “Mine is shorter than yours”: you want a death that is painless and quick. Even here there are choices. What is “quick?” You might prefer something instantaneous, like walking down Fifth Avenue and being hit by a flowerpot that falls off an upper-story windowsill. Or, if you’re the orderly type, you might prefer a brisk but not sudden slide into oblivion. Take a couple of months, pain-free but weakening in some vague nineteenth-century way. You can use the time to make your farewells, plan your funeral, cut people out of your will, tell them to their faces that you’ve cut them out, finish that fat nineteenth-century novel that you’ve been lugging around since the twentieth century, and generally tidy up.

Dementia seems like an especially humiliating last stop on the road of life. There’s no way to do it in style or with dignity. And you can’t be sure that you’re going to avoid it until the moment something else, like cancer or a big, big truck, comes along to carry you off first.

The tsunami of dementia that is about to swamp us as the baby boomers age has gotten plenty of attention, but the reality has not sunk in. But it will, to millions of people who have never taken drugs or misbehaved in any serious way. They are jogging every day but will get Alzheimer’s anyway. So you need to recalibrate. Is it simply long life that you covet, or is it long life with all your marbles? Isn’t the final boomer game really competitive cognition?

The rules of competitive cognition are simple: the winners are whoever dies with more of their marbles. “He was a hundred and two years old when he was accidentally shot by a neighbor, and, except for his habit of breaking into nearby homes and stealing the booze, he was still sharp as a tack.” That’s the kind of thing you want said about you. So “Death before dementia” is your rallying cry. It is also your best strategy, at the moment, since there’s no cure for either one.

Michael Kinsley is a columnist at Vanity Fair, a contributor to The New Yorker, and the founder of Slate. He has served as the editor of The New Republic and Harper’s, the managing editor of The Washington Monthly, and the American editor of The Economist. He appeared regularly on CNN’s Crossfire opposite Pat Buchanan in the ’90s.

Kinsley was diagnosed with Parkinson’s disease 24 years ago. He writes, “Sometimes I feel like a scout from my generation, sent out ahead to experience in my fifties what even the healthiest boomers are going to experience in their sixties, seventies, or eighties. There are far worse medical conditions than Parkinson’s and there are far worse cases of Parkinson’s than mine. But what I have, at the level I have it, is an interesting foretaste of our shared future—a beginner’s guide to old age.”

5 Responses to The Last Boomer Competition by Michael Kinsley