Prompted By What We Watched
10 comments.

Although I almost never watch television in my current life, it is certainly true that there were TV shows that were an integral part of my childhood. My parents did not allow us to turn on the TV and just watch whatever came on. We had to ask permission to watch, and it had to be for a specific show. There are three, in particular, that stand out in my memory. It was interesting to discover, when I looked up their air dates for this story, that their time periods followed one right after the other, so that I was never watching two shows in the same season, but was never without a show to watch.

The three TV shows that were an important part of my childhood, all of whose theme songs I can still easily sing from memory.

The Many Loves of Dobie Gillis was the first show I remember being hooked on. I see from Wikipedia that it was on from Sept. 1959 to June 1963, so that means that I was 8 years old when it started, and 12 when it ended. I can still sing the entire theme song from memory (“Do-o-bie, wants a girl who’s dreamy . . .”). I’m sure that at that age, some of the intricacies of high school life went over my head, but I sure was crazy about that adorable Dobie! And there was Maynard G. Krebs, probably the first television beatnik, who appeared saying “You rang?” whenever anybody said his name. Finally, there was Zelda Gilroy, the brainy girl who sat next to Dobie in class because they were seated alphabetically. She had a crush on Dobie that was as hopeless as mine, because he always went for the gorgeous and unattainable blondes. Maybe this was good preparation for my own later high school experiences. 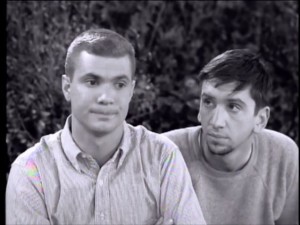 Next was the Patty Duke Show, the theme song of which I can also sing, and often do! This show was on from Sept. 1963 to April 1966, so for me it was ages 12, 13, and 14. Patty played identical cousins, Patty and Cathy, who both lived with Patty’s parents in Brooklyn Heights, for reasons that escape me. How they could be identical cousins was never explained, but it didn’t occur to me to question it at the time. The theme song describes many of the ways they are different – my husband and kids are most amused by the lyrics that say that Cathy adores crepes suzette, but for Patty, “a hot dog makes her lose control!” I can laugh at it now, but I took them seriously then. I loved them, and how different they were, and yet how much fun they had tricking people by passing for each other. It made me long to have a twin sister (or cousin) to help me get through all the traumas of that age. 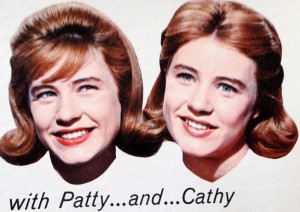 Finally, The Monkees finished off my high school years. This show aired from Sept. 1966 to March 1968, which coincided with my junior and senior years of high school. I knew they were a fake band, 4 guys who responded to a casting call for a TV show and had never even met each other until they were cast. I knew that all their songs were written by other people. None of that mattered. Although they were created to be an imitation of the Beatles, and the show an imitation of A Hard Day’s Night, I loved them, and it, anyway. Just as every girl had a favorite Beatle (mine was Paul), those of us who watched the Monkees inevitably had a favorite Monkee. Mine was Peter Tork, who was kind of goofy, but definitely had the best hair – long (for that time), straight, and blond. (Peter is second from the right in this picture.) 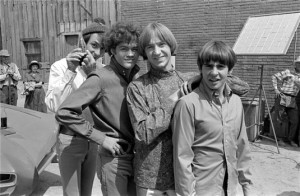 Although in later years there have certainly been some shows I enjoyed, nothing will ever replace these three shows in my heart. I don’t know if I would want to watch them again now, I must admit, because I have a feeling that the first two, at least, might seem really stupid to my adult self. I think The Monkees, however, would be enjoyable at any age. In fact I have read that the band is planning a reunion tour (minus Davy, who died), and I’m now thinking it would be great fun to go see them. Wanna come with me?

10 Responses to TV shows of my youth