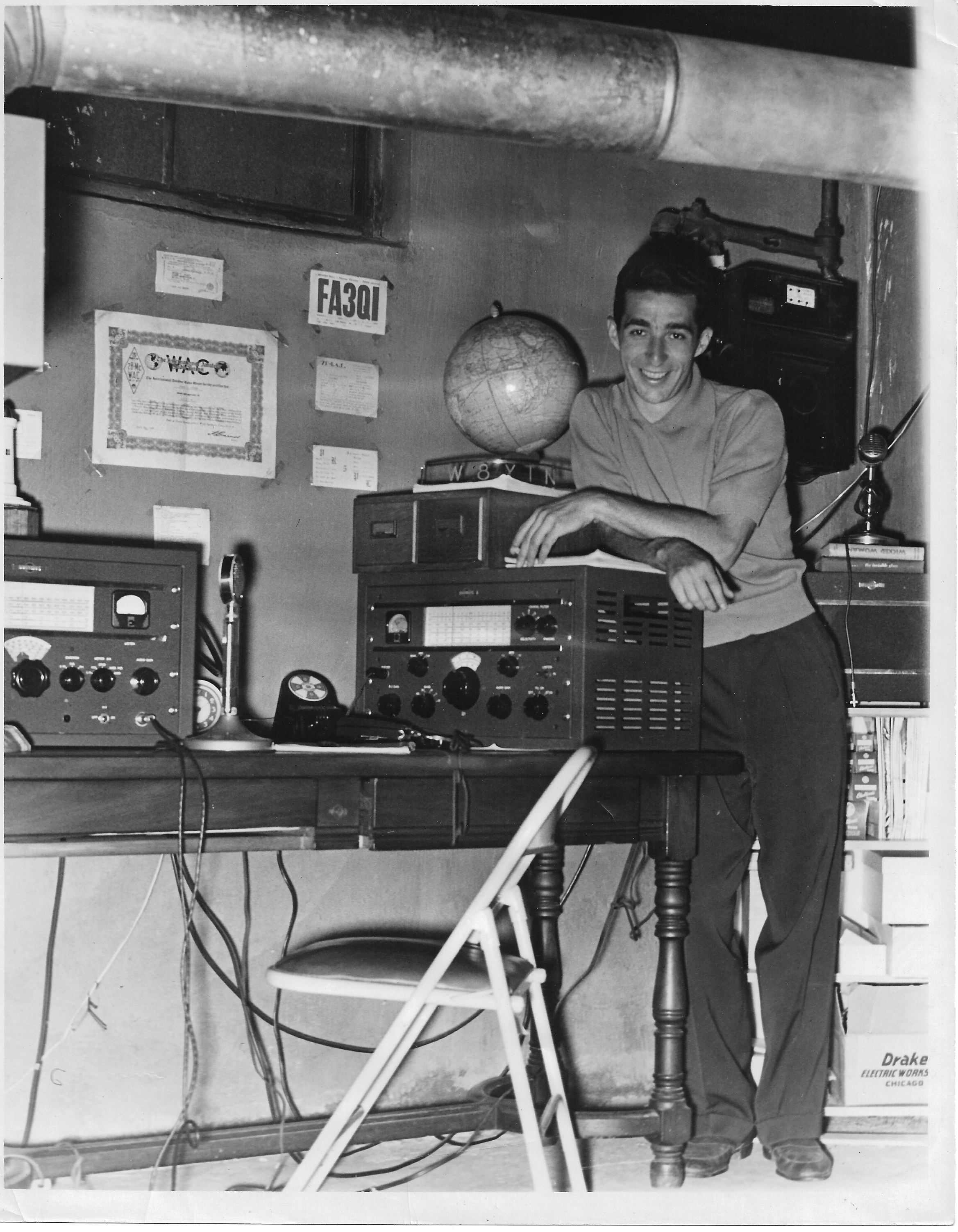 The easiest way to identify our house on Hendrie Blvd. in the ‘60s was to look for the enormous ham radio rig on the roof. It was like the house wore a silver crown of boxes and wires. Three parallel antenna rods spanned the length of the roof. Occasionally you might see them rotate as my father redirected them for the strongest possible signal.

The antenna was controlled remotely from the basement, where my father had set up a radio communications center. It started out bare-bones, as home offices go: bare walls adorned with taped cards and certificates, exposed heating ducts, linoleum flooring, a used desk, a folding chair. (Later, he upgraded with checkered wallpaper, an acoustic ceiling, and a custom-built gray wooden console, like a Navy ship.) Where my father didn’t skimp was the equipment: an array of stacked components, their faces plastered with meters, gauges, switches, buttons, jacks, and dials. A world clock. A telegraph key he didn’t use much, although he was fluent in Morse code. And, in the center of the desk, a microphone. 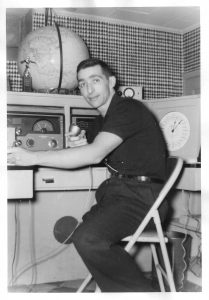 My father at his radio console after his right leg was amputated for cancer.

“CQ,” my father intoned. “CQ, CQ. This is W8YIN, William Eight Yokohama Item Nancy, out of Detroit, Michigan.” Detroit was close enough; nobody knew where Huntington Woods was. “CQ, CQ.” “What does CQ stand for?” I asked. “It doesn’t stand for anything,” he answered. “It means ‘Seek you.’ I’m searching for someone to talk to.”

It was his passion. After he graduated high school in 1943, he joined the Navy. He learned about radio at Naval ROTC in Marquette, and later served in the Pacific as a shipboard communications officer. He arrived too late to see action, but participated in “mopping-up” operations. Now, evenings and weekends, he’d retire to his radio room, switch on the components with a hum and a crackle, and call out to other radio buffs around the world. 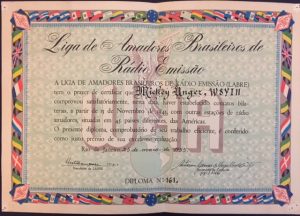 “Worked All Americas,” one of numerous awards my father won in competitions.

After each call, my father would meticulously enter the details in his log. Later, he’d send them a CQ card with his call letters and location. A few weeks later, we’d get their cards in the mail, with exotic stamps that I’d add to my collection.

During competitions, he’d spend the whole weekend at his radio console, racking up call after call, country after country. I inherited a thick envelope of awards and certificates from all over the world. Worked All Europe. Worked All Africa. Worked all Pacific. Worked all Americas. Worked all Continents. Awards in French, German, Spanish, and Portuguese. One hundred countries. All forty zones of the world. Fifty districts in the British Empire. Letters of commendation for disaster assistance.

An obituary for my father in Sidebander Magazine.

Starting when I was about six, he’d occasionally sit me down in front of the mic. “This is Arthur from Melbourne, Australia,” he’d say, spinning the globe and pointing. “Say hi.” I would dutifully comply, but after that, I never knew what to say. I didn’t understand that what I said wasn’t the point. I could have talked about the Detroit Tigers or sung a verse of “Doggie in the Window” or “Hound Dog.” (I liked songs about dogs.) The point was that I was talking to someone halfway around the world—from Melbourne, Australia, for crying out loud.

In retrospect, I wish I’d shown more interest, gotten more involved. It could have sparked a fascination with radio or a career in electronics. Mostly, it would have been a way to spend quality time with my father. But I was just a kid. I didn’t realize that time was so precious.

I only wish he had lived to see modern technology, to see personal computers and smartphones and the Internet. My mom, as she aged, stuck to phone calls and letters; she refused to learn to use email even though it would have brought her in touch with her grandchildren. I suspect my father would have been an early adopter of all of them. I suspect he would have loved Facebook, not to mention Retrospect. Because what was ham radio if not early social media?

Read Mickey Unger’s poignant essay on fatherhood, Upon Reaching the Age of Three, on Retrospect.

The Ghosts in the Machine
by Reginald