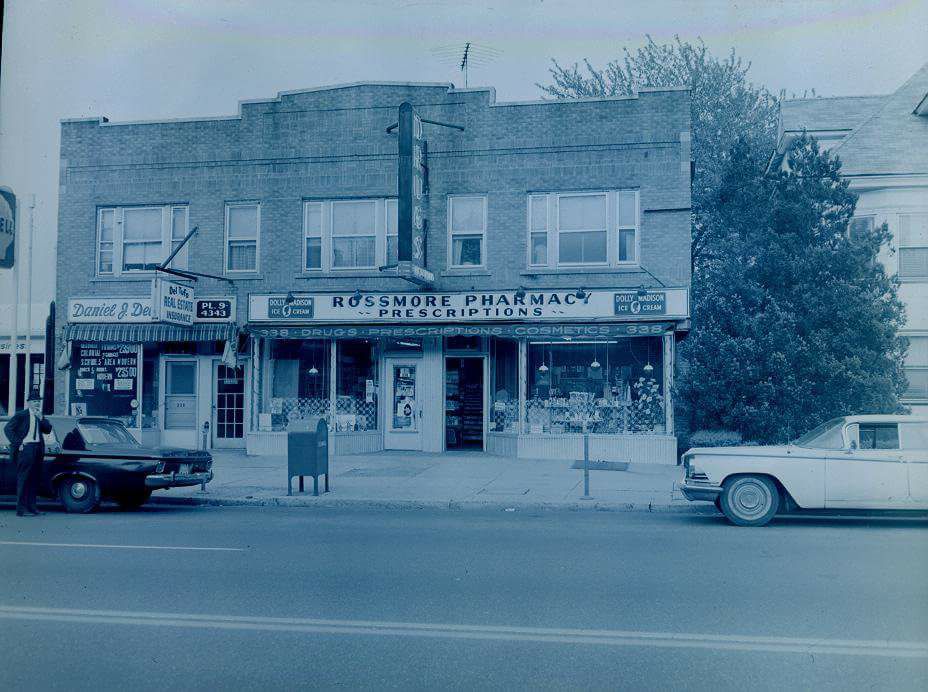 I grew up in Belleville, New Jersey (1960 population 35,005), in a house on Washington Avenue, the main street of town. Directly across the street was a movie theater, a Shell gas station, and a drugstore. The featured image is the drugstore, and you can see a little bit of the Shell sign on the lefthand edge. The movie theater would be to the left of the Shell station. I was very excited to find this picture on facebook in a group I just discovered called “You know you’re from Belleville, NJ.” You might be surprised that I lived in such a mixed-use neighborhood, but it still felt very residential. And since my father’s medical office was attached to the house, I guess we couldn’t have been in a purely residential neighborhood.

We knew the owner of the gas station, and he would often do work on our cars for free, because my father was his doctor. Purchases of gas always came with S&H green stamps, and sometimes other cool giveaways, like drinking glasses with football logos on them. The gasoline was from Shell, but the station didn’t feel corporate, it felt personal. I always knew that if we had a car problem, Pat at the gas station would take care of it. The drugstore belonged to a neighbor who greeted us by name when we walked in. He had a freezer near the door with ice cream cones in it. I always got a chocolate cone when we went there. I don’t remember Daniel Del Tufo and his real estate/insurance office which is next to the drugstore in the picture, but that wouldn’t have had any interest to me as a kid. There was a boy named Nicky Del Tufo in my class in elementary school, who must have been related to Daniel.

Three doors down from us on our side of the street was the Acme, where we got all our groceries. We walked there, of course, it was so close. My mother went there almost every day to buy the ingredients for that night’s dinner. Sometimes, if she just needed one or two items, she would send one of us kids, since it didn’t involve crossing the street. Generally we went with her. There was a carousel of paperback books near the cash register, and we could sit on the floor and read the books while she did the shopping (sort of like the magazines they have in the checkout lines now). I googled Acme for this story, and it does still exist, it’s a chain with stores in Connecticut, New York, New Jersey, Pennsylvania, Delaware, and Maryland, and since 1999 has been owned by Albertsons. Google maps shows me that the Acme building with its small parking lot is still there on my old block, but it is a Walgreen’s now instead of an Acme.

In the opposite direction from the Acme, but still on Washington Avenue, were a bakery and a delicatessen that we liked to go to on Sunday mornings, getting fresh bagels at the bakery and lox at the delicatessen. We would generally also get a chocolate cake or cheesecake or some other treat at the bakery as well. I have described going to those stores with my grandfather in my story about my grandparents, who lived with us. There was also a kosher butcher within walking distance on a different street. We didn’t keep kosher, but my grandmother liked to go there for chicken. The chickens were still alive, you picked out the one you wanted and the butcher killed it for you. I only went with her once, and then refused to go ever again. I’m surprised it didn’t turn me into a vegetarian.

Several blocks down Washington Avenue past the Acme was the central business district. This consisted of about three blocks bustling with small stores and one biggish Woolworth’s. I mainly remember going into Woolworth’s to look at their toys and costume jewelry and other assorted knickknacks. We referred to it as “the five and ten cent store.” I don’t know if they still had items for five and ten cents by the late ’50s, but I wouldn’t be surprised if they did. Another store we went to was a small shoe store called Jack and Jill that sold children’s shoes. At the far end of the store there were two really high padded seats for children to sit on while they got their feet measured by the salesman. I now realize the purpose of these seats was so that he could do the measuring without bending over, but for me it was like sitting on a throne, and I loved to go there and sit in those seats. We always had to buy “sensible” shoes that gave us good arch support, nothing trendy like loafers, and certainly not sneakers – I don’t think Jack and Jill even sold sneakers.

For clothing we always went to department stores in Newark. There were local clothing stores in Belleville, but my mother did not consider their merchandise to be of good enough quality. We generally went to Hahne’s or Bamberger’s (found only in New Jersey), or Orbach’s (locations in New York, New Jersey, and, oddly enough,  Los Angeles). For special occasions, we got to shop at Lord and Taylor or Bloomingdale’s. All of those stores are chains of varying sizes.

Restaurants were all local. I don’t even think there was such a thing as chain restaurants back then, and certainly no fast food. There were several different diners that we went to, with names like the Woodside Diner and the Arlington Diner, as well as Don’s 21, the Mafia joint that I wrote about in Scenes from an Italian Restaurant. The first McDonald’s opened in Belleville in 1960 or ’61, and we tried it once out of curiosity, but never went back. For ice cream, we sometimes got Dairy Queen or Carvel, but generally preferred a local place called Holsten’s that made their own ice cream.

Nowadays when I’m so conscious of almost everything being a chain, I make a concerted effort to patronize local businesses, which sometimes leads to comical results. When we first took Molly to college in Whittier, we were looking for a place to have breakfast. We didn’t want to go to Starbucks, but we saw another place on the next block that we thought was a local business. It was called Coffee Bean & Tea Leaf, which sounded charming. We went in and ordered at the counter. It was only after we got our food that we discovered that it was also a chain. Because they don’t have any locations in the Sacramento area, we had never heard of them, but it turned out that they have more than a thousand stores nationwide (as compared to 30,000 worldwide for Starbucks), so not exactly the charming local business we thought we were patronizing. 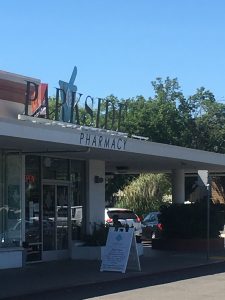 In my current life in Sacramento, I always avoid restaurants that are chains. That is easy to do, because we have a vast and varied selection of eateries here in the Farm to Fork capital. We have one local drugstore (pictured) that tries to compete with Walgreen’s, Rite-Aid, CVS, and the drug departments of Target and Walmart. I am actually amazed that they are able to stay in business. We have one local bookstore for new books, and several for used books. I hardly ever buy books at all, because I can get everything I want to read at the library.

I have to admit that I do a lot of shopping online. Sometimes stores like Target or Kohl’s don’t have the product I need in the store, but I can order it from their website. Sometimes Amazon is the only place I can find what I am looking for, but at least they give a percentage of my purchases back to Retrospect, which I appreciate. I am sad that I am not able to do a better job of supporting local merchants, but they don’t have the inventory. And the reason they don’t have the inventory is because of the competition with online stores. It’s a vicious cycle, and one that seems pretty hard to break. I miss the days of charming little stores owned by people you knew, who gave you good service and provided what you wanted. But I don’t think those days are likely to come back. And it sure is nice to get packages delivered to me right at my door!

17 Responses to You Better Shop Around

A Stroll Down Bloomfield Avenue
by Marian