Scenes from an Italian Restaurant by Suzy
200
(297 Stories) 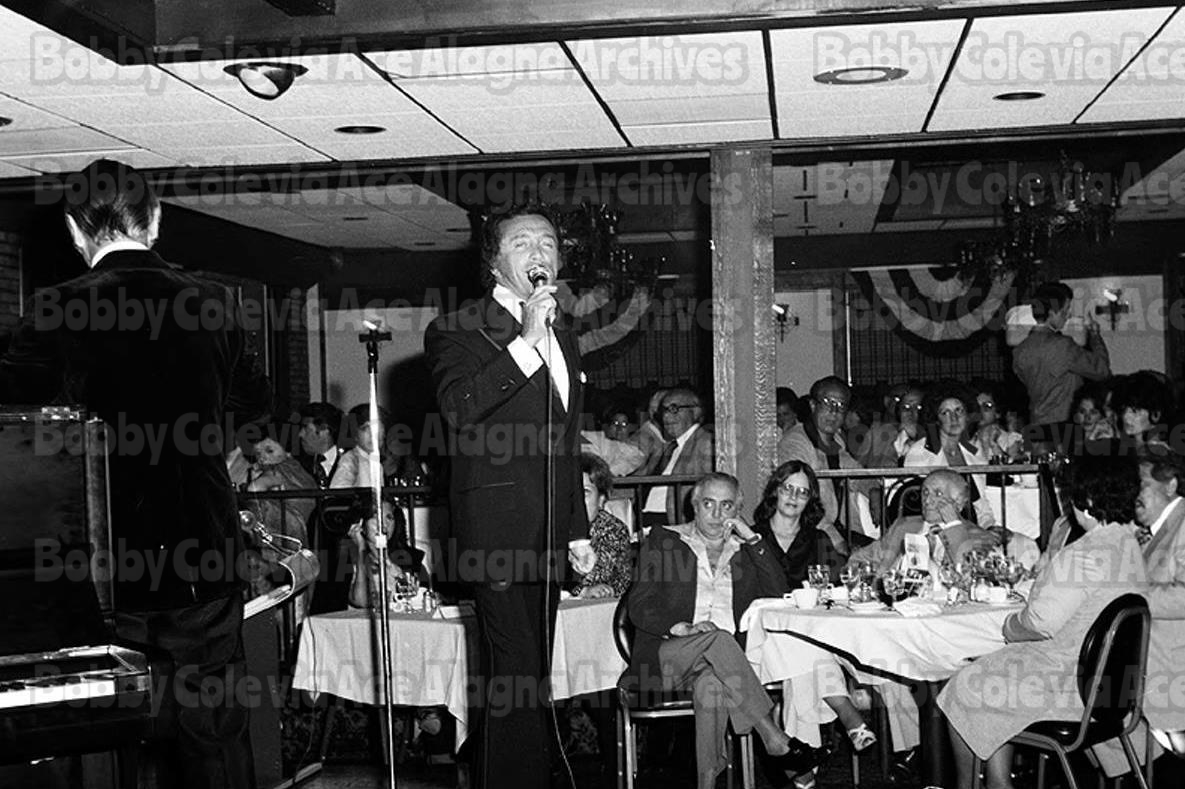 Billy Joel probably never ate at the Italian restaurant my family favored when I was young, since he grew up in New York, not New Jersey, but he must have had a similar place in mind when he wrote the song “Scenes from an Italian Restaurant.” Don’s 21 was located on McCarter Highway in Newark, which was also known as Route 21, and I assume that’s where the “21” in the name came from. The featured photo is of Al Martino, a popular Italian singer of the ’50s and ’60s, performing at Don’s. The picture, which I found online, was taken in 1979, after my family had left the Newark area, and when Al’s career was on a downward trajectory**, but it gives a sense of what Don’s looked like, with the white tablecloths, low ceilings, and tables crowded close together.

The food there was good, but what I remember most was the clientele. Everyone was Italian, and they were always dressed up, the men in suits and ties, the women in dresses and high heels. Flashy jewelry on both women and men. The men generally sported diamond pinky rings. That fascinated me, since the men I encountered in my daily life generally didn’t wear any jewelry at all, and certainly not diamond pinky rings. Almost all the cars in the parking lot were big black Cadillacs. (We had a Cadillac too, but it wasn’t black, it was pale green. later replaced by a white Chrysler Imperial.) These guys were Mafiosi, there was no doubt in my mind. We eavesdropped shamelessly on their conversations — my mother was known to say “shush” if one of us started to talk when the neighboring table was saying something interesting. We never heard any Mafia hits being planned, but I’m sure it happened there.

Before we started going to Don’s 21, my family had two favorite eateries that we patronized, the Claremont Diner in Verona, New Jersey, and the Arlington Diner in North Arlington. The Claremont Diner has been beautifully described by Marian in Hot turkey sandwiches at the Claremont Diner. While I vividly remember going there, the only food memory I have is of their incredible cheesecake. It was the best anywhere around, so creamy and delicious. I’m sure my parents made us eat “sensible” food before we got the cheesecake, but what that might have been, I can no longer recall.

The Arlington Diner is still in existence, I discovered by googling it, so I will have to make a trip there if I ever go back to New Jersey. It was there that I discovered the delights of veal parmigiana, and then later fried oysters. Thinking of both of those dishes makes my mouth water even now. My middle sister loved the shrimp cocktail appetizer, so my parents actually let her order two shrimp cocktails and no entree, which was unusual for those times. The waitresses, who were all middle-aged, wore hairnets, and called everybody “Hon,” didn’t know what to make of her lack of an entree the first few times she gave that order.

We knew the importance of not ordering more than we could eat. Since there was no concept of a “doggy bag” yet, anything you didn’t eat got thrown away, and my father would get furious if we didn’t finish our meals. “Looks like your eyes were bigger than your stomach,” was the worst possible condemnation.

In my adult life, there have been two restaurant experiences that stand out, although in neither case can I remember any specifics of what I ate. The first was at Lutèce in New York, an icon on East 50th Street from its opening in 1961 until it closed in 2004. It was proclaimed the best restaurant in the US by Julia Child and other food critics for many years. My oldest sister and I took my parents there for a milestone anniversary, 30th or 35th, so it must have been either 1973 or 1978. We ordered the food ahead of time so that our parents would not have a chance to look at the menu, because we knew they would be horrified by the prices. I remember thinking at the time that it was the best food I had ever eaten in my life. I think the bill for four people came to $150.00. That doesn’t seem like much for an elegant dinner now, but according to the inflation calculator I consulted, this would be about $800 in 2018 dollars. It was worth every penny though, because my parents were so delighted.

The second experience was The French Laundry in Yountville on my 50th birthday. I actually saved the menu from that meal, and if I were more organized I could post it here. If I find it, I will add it to the story. Eight of us enjoyed this fabulous dinner, which was paid for by my beloved mother, who was more relaxed about spending money by then. This meal has made an appearance in two other stories of mine, They Say It’s Your Birthday and The End of the World.

All of these establishments, the lowly diners as well as the Michelin extravagances, were one-of-a-kind places. There is no way you can get the same kind of quality dining experience from a chain restaurant, and yet nowadays that is what they mostly seem to be.

**Al’s career got a small boost in 1972, when he played the role of singer Johnny Fontane in The Godfather. Johnny is most memorable for being the reason that the horse’s head winds up in somebody’s bed.

17 Responses to Scenes from an Italian Restaurant