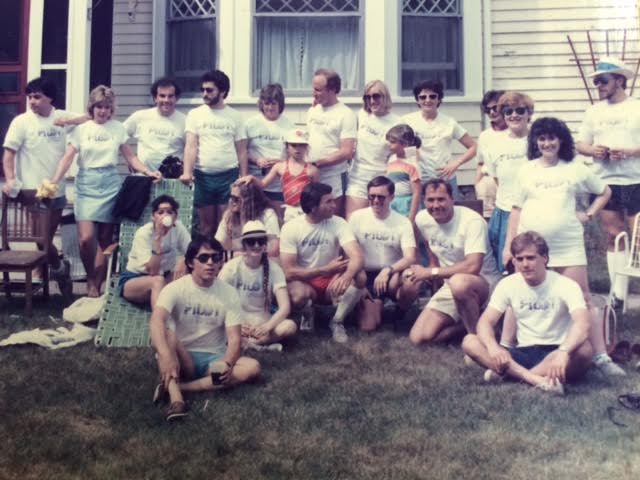 I interviewed for a year, but it was a start-up and they weren’t ready to hire salespeople. I was looking to leave the software company I worked for and come to this one, as the product was a good fit with what I already knew. In fact, it could serve as a friendlier front-end to my current product and I was the perfect person to introduce it to the world, having been the most successful salesperson at my current company.

When they were ready, they hired three of us, Mehmet, Drew and myself. We all had the same offer letter and started the same day. But Mehmet’s territory was the whole East Coast except New England. Drew had the rest of the country. I had New England including greater New York, but not the city itself. I protested to the president of the company. No way was that fair, but he said salespeople always wanted more territory and just do my job. I also was not allowed to hold Hardee’s Food Systems in Rocky Mount, NC. They asked me to call as soon as I got to the new company, since they already wanted my new product. Mehmet made the call, got the sale and told me they had signed strictly on the basis that I was with this new company. I got no credit.

I also became pregnant a month after joining this little start-up of 15 people. I didn’t tell anyone, but did have “morning sickness” all day. People at the office became annoyed when I ran to the bathroom to throw up, thinking I was contagious. I finally had to confess that what I had, they couldn’t catch! It didn’t take long for them to figure things out. Within a few months, I felt better and had a few good leads that I pursued. I don’t chase my tail. I am good at screening out tire-kickers and only chase down leads that I think have potential. I am not afraid to ask for the order and am good at closing business. I also set up a strategic partnership with Arthur Andersen.

I grew bigger and bigger. I put on 42 pounds in total and worked until two weeks of my due date. My manager had recently been through a nasty divorce and I think that affected his view of women. He didn’t take a shine to me, a strong, successful woman. He wanted to stay close to home before the 4th of July holiday, so asked to come on a call with me to Combustion Engineering in Stamford, CT. He drove, I did the sales pitch. He had never seen me in action, though it was one month before the start of my maternity leave. The call went well. He was impressed. Really? Did he think I would be incompetent?

My clients from Westinghouse referred to my maternity dress as something made by “Omar the tent-maker” (couldn’t say that today, but this was 31 years ago). The Featured Image is the company picnic. I am the curly-haired (it’s a perm) big-bellied lady on the right. The president is wearing red shorts in the center of the photo, looking to his left. My manager is kneeling to the left of me (actually, my right side), with the receding hair line.

I closed business with Westinghouse, Combustion Engineering, Gillette…I don’t even remember who else. Aetna was in the works. Mehmet closed it and I did get credit for that. At the time I went out on maternity leave, the amount of stock we salespeople were being granted still had not been voted on by the Board. I, personally, was responsible, in 10 months time, for 60% of the revenue of the entire company. I had planned to take a 4 month, unpaid maternity leave.

I left on August 2, 1985. A few days later, the letter arrived telling me the stock grant. It was 40% smaller than my two male colleagues. I called the president. He lived a few blocks away. I asked if he could come by for a talk. I asked why, given my actual performance, I had been voted less stock than the other salesmen. He told me my manager hadn’t made a strong case for me in the Board meeting. He went on to say that I had fewer sales calls than the others and my pipeline wasn’t as long, and I seemed to be in the office more. Of course I was. I could make a call in the morning and still come in, since I had the LOCAL territory!  But I had CLOSED MORE BUSINESS! That was irrefutable.

I talked to a lawyer friend. She said I had a clear case of discrimination, but judges hated cases like that (1985) and if I ever wanted to work again, I should just walk away, which is what I did. I stayed home with David, who was born on August 20, for 18 months. I really don’t know what happened to the software product I sold, but some of the principals in the company have gone on to other successful ventures. I took my lumps and added to my feminist cred.

Part of the Union
by Dave Ventre