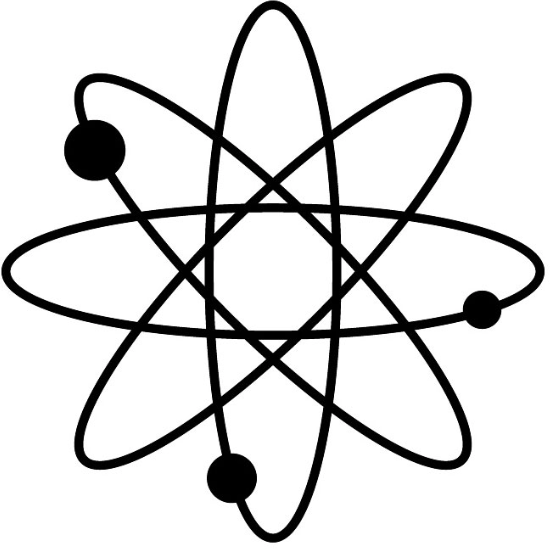 Though always a good student, the arts and literature were my bailiwick. I had to work hard at math and science to get good grades. Thus, when Mr. Perkins, who I had for 7th and 8th grade science, announced that we all had to do a project for the Science Fair, I struggled for an idea.  This was in 1965 and I was a mere 7th grader. We had to put together a visual presentation and report. This would represent a large portion of our grade for that card-marking period (three within the term). I decided to make a model of an atom from clay, wire and push pins with a report to go along. The nuclear age was upon us and this seemed like a good idea. I had never been to a Science Fair and really didn’t know what to expect.

While I am an avid admirer of the visual arts (and have been involved in art museums for years), I am truly not good at creating anything visual or craft-based. I am in awe of those who can. Still, I bought the necessary supplies, read up on the topic and began. It was actually much more difficult than I expected it would be to get the wire to stay in shape, the push pins to pierce the wire to give the desired effect, the clay to stay in shape to represent the nucleus. Nothing hung the way I envisioned it. And I chose hydrogen – a very simple atom. I finally got it all together, made the “booth” out of my father’s shirt cardboards, did my simple report and brought it to the school gym at the appointed time.

I looked around with astonishment. The other projects were much more elaborate. Humiliation seeped into every pore of my body, but it was too late. We left our projects to be judged. Ribbons were awarded. Mine took green; the lowest possible. Eighth grader Jon Polk had worked for a year experimenting with the thyroids of rats. His experiments, documented with the skinned hides of several of his specimens, tacked to the board with growth charts showing how the experiments with the hormone had affected the rats, not only took first place at our school, but went on to win at the district level in Greater Detroit. His was an outstanding effort. 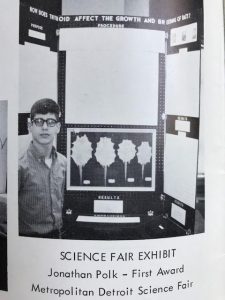 Meanwhile, back in class, Mr. Perkins inquired what happened to me. This was not up to my usual standard and my grade reflected that. Accustomed to getting “A’s”, I was horrified. I acknowledged my error in underestimating the complexity and importance of the assignment (also, my total ineptitude at putting together a decent visual presentation) and asked what forms of extra credit could I do to bring my grade up, which I willing undertook for the rest of the semester. I don’t recall what forms those extra assignments took, but I know I did them diligently (as I always did) and managed to scrape out an “A” for the whole term.

My husband and two kids still talk rings around me. “Tech talk” is the norm when we sit at family meals. I smile vacantly, just pleased that we are all together, and strain to understand what they are discussing. It is a different type of intelligence, I once told my husband, and challenged him to sing an aria or recite a Shakespearean monologue. We all have our own strengths.