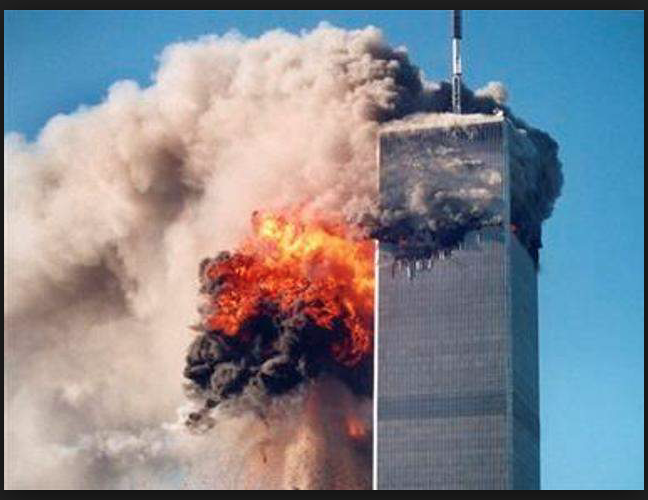 We came off the Vineyard just before Labor Day, 2001 to a house in renovation chaos and our family in chaos. My in-laws had always spent the parting days of summer with us on the Vineyard, then the beginning of the fall with us in Newton, but Erv passed away the previous May. Gladys still came to the Vineyard and returned to Newton with us, but couldn’t stay with us, as her suite, like the rest of the house, was torn apart. We had no kitchen, the contents were packed away and in storage scattered around various rooms in the house. We set up a hot plate next to the sink, microwave and extra fridge in the finished basement. We ate a lot of take-out off a card table. Every window and door was being replaced, as well as the front den turned into a library, the screened-in porch turned into the den and integrated into the kitchen, which was stripped down to the studs.

Before returning, we replaced the carpet in the lower level, exposing the old tiles and discovered they had asbestos, so had to do proper removal and abatement, which cost a fortune and slowed down the whole project. We even set up a new phone system and for about a week, I tried a new-fangled answering system with a randomly assigned, 10 digit, impossible-to-remember password. This was long before I had an iPhone. I had a Motorola flip phone. I did not know how to store phone numbers in it. I had a little sticker on it with a few key numbers.

Gladys, my dear mother-in-law, stayed in town several extra weeks because her best friend since the age of 15 had donated the money for a new wing to the Rose Art Museum. This would be dedicated in a fancy black-tie affair on the third Saturday of September, and childhood friend Lois wanted her there. Gladys couldn’t stay with us. Our artwork was off the walls and stored in her bedroom and the adjacent sitting room, even while the windows were stripped out and changed, sills caulked and painted. So she stayed with friends, but wasn’t really comfortable. She wanted to get to our house as soon as she could. Despite her requests, I could not speed the progress of the work.

My children were also in chaos. David, in 10th grade, had transferred to a small, intense independent school in Boston’s Back Bay. He took the “T”, Boston’s public transportation system to and from school, with the closest station a mile from our home. Jeffrey, in 6th grade, had just started middle school and for the first time had multiple teachers in a large school environment. Our Asperger’s, ADHD child didn’t deal well with change or the need to make decisions of any sort. No one with his profile does. This environment assaulted his senses constantly. This was the last year he barely functioned in school. For the next several years, he shut down altogether. He also began training seriously for his bar mitzvah, 20 months away. He was taking various forms of therapies, including occupational, with an appointment that Tuesday, which was supposed to help with sensory integration issues. He had a lot on his plate.

Dan worked at Accenture, newly formed as a result of the IPO of Andersen Consulting. He traveled constantly, but also knew that, as a result of the IPO, and his age, he would not remain at Accenture much longer (they pushed VPs past the age of 50 out the door). On the evening of September 10, Dan flew from Logan Airport to Washington, DC for an internal training conference. The meeting was a mile from the Pentagon.

At 9:10am on September 11, my sister-in-law Liz called. “Where’s my brother”, she barked? “He’s in Washington, Liz. Why?” “Turn on the TV”, was all she responded. I turned it on in time to see the second tower fall. I had no context, I didn’t understand what I saw. I was horrified. Dan’s family knew he was flying, didn’t know when or where, just that he flew to NYC a lot and they already knew that one of the planes that flew into the towers that morning came out of Logan (though it hadn’t been flying to NY, it was LA-bound). Two of the four planes that went down that morning came out of Logan. I assured Liz that Dan was OK, hung up and ran out of the house. I had a private Pilates class in a little studio in Newton with no TV or phone. They charged me a fortune whether I showed up or not.

The few people in the studio seemed to know more than I did. They knew that Boston was being evacuated as there were fears that the Hancock Tower (Boston’s tallest building) was a target and there was a traffic jam coming out of town. I worried about David, a few blocks from the Hancock. I had an appointment at our temple to talk, briefly, about Jeffrey, then ran home to shower. The phone rang. It was David’s school advisor. They closed the school, but wanted me to drive into Boston to pick him up. They didn’t want any of the kids underground on the subway. Boston was in a panic.

I looked at my watch. I had just enough time to drive in, get him, drive back to Newton, pick up Jeffrey and a sick neighbor’s kids at the same school and get my younger child to occupational therapy. The phone rang. I ran to grab it, but missed the call and didn’t have time to look up that crazy 10 digit password to retrieve the message. It would have to wait. My kids were stunned and anxious. I had no answers for them, except to assure them that their father was safe. He had called and reassured me.

When I finally got Jeffrey to occupational therapy at about 3pm, I called into my voice mail. Poor Gladys had called me several times. She was frantic. I looked up her friend’s number and called. She was so crazed, she had called Dan’s office. His admin was able to tell her that he was safe. I apologized for not calling her back earlier, but told her I just did not have the time, I had to take care of my kids. She came over for dinner so we could all be together.

We gathered in front of the TV later in the day, watching the replays in shock, trying to make sense of the whole day. Dan was a mile from the Pentagon when it happened. His training session dissolved. He wandered around DC, which he said was like a ghost town. He found a place to give blood. They said they didn’t need any. There were no survivors in need of blood.

He and several friends decided they didn’t need to stay for the rest of the training meeting. What was the point? Four of them, from different cities, rented a car and drove north, dropping people off as they went. Smart move. Flights were grounded for days and rental cars were soon gone. Dan was the last one driving. He dropped the car at Logan on Thursday, Sept 13 and picked up his own car, arriving home late at night. The landscape had become surreal.

I picked up red, white and blue folded ribbons to wear on our lapels in remembrance and solidarity. On Friday night, my mother-in-law and I went to temple and prayed; for the lost and those who survived. We knew the United States would never be the same. How profoundly we’d changed, we could not yet know.

4 Responses to 9-11 in the Pfau Household

Immeasurable, incomprehensible
by Charles Degelman
With God on Their Side
by Lou Moffett

The End of the World
by Suzy