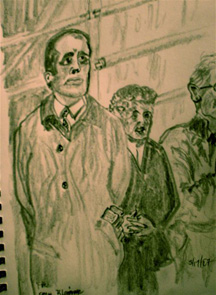 From 1966 to 1972, heavy machinery lifted the World Trade Center to the sky. The effort elevated 987,500 tons of steel, concrete, glass, copper wiring, aluminum and galvanized steel conduit, air-conditioning and elevator machinery, fire retardant, furniture, tile and flooring to a height of 400 meters per tower. Raising and stacking this vertical factory required the extraction of an immeasurable amalgam of dead animals and vegetation from beneath earth’s surface. In death, these fossils slept, tacitly storing energy from the sun and water, the fluid of life. Once abducted, the transformed creatures provided the fuel needed to load the World Trade center with the gravitational energy of 280 tons of high explosive per tower.

Like matter, gravitational energy can neither be created nor destroyed.

During the four years of construction, diesel and gasoline engines and electric motors, fueled primarily through fossil-fuel combustion, their torque increased by the leverage of pulleys and cranes, these machines and the people who ran them wrestled with gravity to raise steel and concrete from ground level to 1362 and 1368 feet into the New York skyline. The structural design and engineering of this complex stacked, fastened, and braced the vertical mass of these two buildings — 493,750 tons per building — against the inexorable pull of the earth’s gravitational system.

And so they stood for 28 years and five months, the North Tower and the South Tower, one million tons of gravitational defiance, twin metropoli of commerce rising from the corner of Liberty and Church Streets in downtown Manhattan.

A fire ensues in each of the two stricken towers. Approximately twenty thousand gallons of jet fuel ignites and burns, weakening the structural steel. As the beams are subjected to 1000-degree heat, they begin to bulge, rendering the floors unsupportable.

The weight of the floors above presses down, high up on the North Tower, lower down on the South Tower. The differences in unsupported weight cause the South structure to fail first. The collapse takes approximately 10 seconds. Twenty-eight minutes later, the North Tower collapses, plunging into its own basement in approximately 15 seconds. The impacts register at 3.5 on the Richter Scale.

In ten to fifteen seconds, the collapse of the towers released a combined energy of one million tons of vertical lift expended on the structure twenty-eight years earlier, energy generated by four years of fossil-fuel combustion in engines that wind and unwind pulleys and cables carrying concrete and steel upwards via cranes, winches, suction pumps, and elevators.

The light of the sun, the life-bearing qualities of water, the died-back flora and fauna from prehistory, once living, forever dead, layered, compressed, sleeping for 10 million years, their tarry bodies extracted and refined, the design and fabrication of machinery to lift one million tons of concrete and steel and hold it against gravity, the devastation of its 10-second release, foot-pounds, cubic meters, mass and velocity… these things I can understand.

The human terror, the courage, the fear, the wonder, the decision to jump or burn, the loss of innocent life, the turning point in history that we knew was inevitable, how that turning point has manifested itself over the sixteen patterned and chaotic years, what we saw, what we knew, what we learned, what has left us mystified, the loss of two friends, the trauma of all who witnessed, the people, places and events that began to stream from the collapsing towers like molten steel, the place of commerce and industry in the spectrum of geologic history and our newly minted anthropocene era… these things I find immeasurable, incomprehensible.

The End of the World
by Suzy