A Borrowed Story From My Neighbor, a Judge by Betsy Pfau
200
(304 Stories) 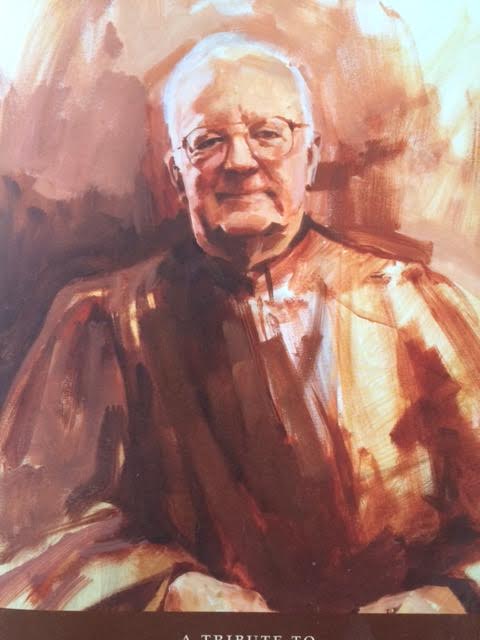 The Honorable James L. Oakes and his wife Mara lived next to me on Martha’s Vineyard until his death in 2007. He was kind, patient, brilliant and I adored him. Mara, with whom I remain close, shared this article on citizenhood, reprinted from the Brattleboro Reformer, on July 4, 2010. She gave me permission to share it with this community last week.

What it means to be an American citizen

Editor’s note: This is a draft of a speech to new citizens during a naturalization ceremony in Vermont on May 11, 1970 by the late Honorable James L. Oakes when he was United Sates District Judge. It is offered to you in honor of Independence Day.

Today and at this hour each of you is about to perform the last act of your life as an alien and the first act of your life as an American citizen. This is a happy occasion, to be sure, and we are pleased to welcome you and your loved ones, not just to the the United States District Court for the District of Vermont but also to United States citizenship.

This is also a solemn occasion, however, and it is the duty of the Court, and a very pleasant duty it is, to remark upon the meaning of citizenship – the meaning of being an American citizen.

I said this was both a last and a first for each of you. It is also a first for the Court – the first naturalization ceremony which I have been privileged to conduct.

This being a first, I have had the opportunity to review in my own mind some of the rights that go with being an American citizen, and to think about the responsibilities that go with those rights.

For — make no mistake about it – in a democracy such as ours, for the government to work, for every individual to be able fully to enjoy his rights as a citizen, requires that each of us also performs his obligations, his duties, his responsibilities to other citizens.

And, if I may, I would express the hope that this brief restatement of American rights and responsibilities may serve to remind them to some of us who have not been required to work so hard to become citizens, in other words, who have been citizens by the fortune of birth here. The gift of citizenship is sometimes taken all too much for granted by those of us who have acquired it without the work or sacrifice on our part that each of you has made to come here today. As Judge Ernest Gibson has said from time to time in similar proceedings, “We look to you here to bring us new strength, new vigor and greater understanding.”

We American citizens – all of us, those of us who have chosen America as our land of adoption and those of us who come from those who did so – have the right to speak freely, to express our views, to think as we choose. But we also have the duty and responsibility to let other American citizens speak, to tolerate the views of others, to listen. We may disagree with another man’s views, but we will, in the works of the French philosopher, defend to the death, his right to speak them, or to print them.

We citizens of the United States have the right to worship freely and as we see fit, but we have the duty to respect the religious views, or lack of them, on the part of others, no matter how unenlightened these fellow human beings may seem to us. In the brotherhood of man, in America, there in no room for religious intolerance.

We have the right as a people, also guaranteed to us by the First Amendment to our Constitution, peacefully to assemble – a right that in recent years has been used more often, particularly by young people and particularly by people seeking equality of citizenship for all. But we have the duty, if we exercise this right, to exercise it peacefully, not to injure or harm the person or the property of others, in short, to tolerate all the right of other American citizens. Democracy carries with it an obligation to restrain from the use of force or violence whether in the expression or the denial of a point of view.

We have the right, as citizens, to vote and to petition the Government for a redress of grievances. But we have the duty to educate ourselves as voters and petitioners, to learn about the issues, to get the facts, and we also have a duty to become involved in the business and affairs of our community, our state, our nation. Education is both the strength and the weakness of Democracy; the extent to which our Government works well depends in the largest part upon the extent to which we as citizens and voters concern ourselves with the work of Government.

We have any number of rights when we come into a court of law, whether as citizens in civil controversy with another individual, or more particularly when we are faced with charges in a court of criminal law – such rights as those to a speedy, public trial, by an impartial jury after being informed of the charges against us, a right to counsel, regardless of our financial means, the important right not to be compelled to be a witness against one’s self – all these precious rights which are among the first to be undermined and ultimately destroyed in totalitarian countries, under a Hitler or a Stalin. But we have the duty as ordinary citizens to make the sacrifice of time and money to take our turn in serving as jurors (something which many of you will be asked to do from time to time). Beyond this we have the duty as citizens to respect the Law, and to uphold it, and to respect the Courts, to conduct ourselves properly in the courtroom, and to recognize the basic aim of a Government of Laws, not Men, and the basic principle of American justice that every man is presumed innocent until proven guilty. Justice denied to one man is justice denied to all, for in our American Democracy the rights of each citizen are dependent upon, and tied inseparably to, the rights of every other individual.

There are many other rights we have as Americans, rights which are inalienable, that is, which cannot be taken away from us by any other man or group of men – the rights to Life and to Liberty and indeed the right to the pursuit of happiness, a happy phrase that Thomas Jefferson used in penning the Declaration of Independence. He used this phrase to mean a whole bundle of rights to enjoy this wonderful country of ours and the wonderful people in it, without interference, oppression, or annoyance by others – the bundle of rights that includes the rights to clean air, pure water, economic opportunity for our children, peace in the neighborhood, safety in the streets.

All of these rights – those enumerated in the Bill of Rights, those implied in the Declaration – are protected and preserved to us by the Constitution and the Laws and the Courts of this great country of ours; they cannot be denied to us on account of race, color or creed. But these precious rights ultimately rest, as a great philosopher-judge has said, not in constitutions, laws and court. “Liberty,” Judge Learned Hand has said, “lies in the hearts of men and women; when it dies there, no constitution, no law, no court can ever do much to help it. While it lies there it needs no constitution, no law, no court to save it.” Liberty can be lost to us by inaction, by failure on our part – by the failure to do our duties as citizens, by the failure or omission to meet our citizens’ responsibilities.

I welcome you to citizenship in this, still the greatest country in the world, which with, but only with, the dedication and commitment of each of us has a glorious future, a magnificent destiny.

James L. Oakes was a longtime resident of Brattleboro. He served as a member of the Vermont Sate Senate from 1961-65, and as Attorney General of Vermont from 1967-69. In 1970, President Richard Nixon nominated Oakes to fill the seat on the United Sates District Court for District of Vermont. A year later, in 1971, Nixon elevated Oakes to the Second Circuit Court of Appeals. He was quickly confirmed, and served as a judge for 35 years, including as Chief Judge of the Second Circuit from 1988 to 1992.

6 Responses to A Borrowed Story From My Neighbor, a Judge